A couple of days ago, September 17, we marked 232 years since we got our US Constitution.

In honor of that, I thought we might do a pop quiz. This is open book. You can use your pocket Constitution, or a printed copy, or an online copy. The answers will follow, below.

Some of the questions are about the history and intent and surrounding information, but much of it will come from the Constitution itself. For questions that ask “where in the Constitution” do you find something, you can answer with Article and Section numbers, or Amendment numbers.

1.     What year was the Declaration of Independence signed?

2.     What year was the US Constitution signed?

3.     What was the purpose of the Declaration of Independence?

4.     What was the purpose of the US Constitution?

5.     What are the three branches of government?

6.     What does bicameral mean, and what does it refer to in our government?

7.     What chamber represents the people by population—that is, a representative for a set number of people?

8.     How many Senators are in the Senate, how were they originally chosen, and how are they chosen now because of which Amendment?

9.     During the original Constitutional Convention, what is referred to as the Great Compromise, or the Connecticut Compromise?

10.  Does the Constitution grant legislative powers to the executive or judicial branches? Based on your answer, how do you explain the Environmental Protection Agency or Roe v. Wade?

11.   What are the eligibility requirements for being President of the United States; give article and section number for your answer.

12.  Does the President have the power to create the budget? Explain.

13.  What number of justices for the Supreme Court is designated in the Constitution?

14.  What is the Bill of Rights and where is it found?

15.  Where does the phrase “separation of Church and State” appear in the Constitution, and what does that mean?

16.  Where does the Constitution say, “Congress shall make no law respecting an establishment of religion, or prohibiting the free exercise thereof”? And what does this mean?

17.  What is the purpose of the right to keep and bear Arms?

19.  What is the Electoral College? What is its purpose? Where is it described in the Constitution?

a.     Lay and collect taxes, duties, imposts, and excises.
b.     Govern education.
c.     Fix the standard of weights and measures.
d.     Offer charitable services (welfare).
e.     Raise and support armies and navy.
f.      Require purchase of a service or product (such as health insurance).
g.     Establish post offices and post roads (mail system).
h.     Target industries in accordance with a social agenda (gun manufacturing, automobile manufacturing, nuclear energy, oil and gas, fast food or sugary drinks).
i.       Lay and collect taxes on income.
j.       Favor or disfavor individuals or groups for hiring, educational opportunities, or other purposes based on their race or religion. 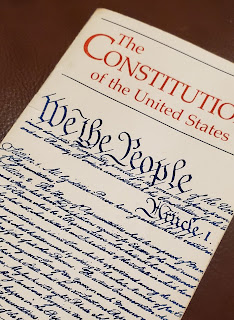 There’s plenty more to ask, but if you know—or can learn—the answers to these questions, you might know enough to be a good citizen and an educated voter. And we can always use more of those.

May our Constitution outlast all those enemies within and without who misunderstand, misconstrue, and even purposely thwart her sacred purposes.

3.     To declare independence from Great Britain.

4.     To form a “more perfect government,” and we could add, as the Preamble does, “establish Justice, insure domestic Tranquility, provide for the common defence, promote the general Welfare, and secure the Blessings of Liberty” to those founders and their posterity.

5.     The legislative branch, the judicial branch, and the executive branch.

6.     It means two chambers. It refers to the two chambers of our legislature: the House of Representatives, and the Senate.

8.     Two Senators per state, regardless of population size of the state. Originally, they were chose by the respective state legislatures. That changed to popular statewide vote with the Seventeenth Amendment in 1913.

11.  The president must be a natural born Citizen (not a naturalized citizen), at least 35 years of age, and residing within the United States for fourteen years. This is found in Article II, section 1, the fifth paragraph. About the fourteen years: It was not uncommon for people to spend extended time overseas for various reasons, as Thomas Jefferson was doing during the Constitutional Convention, for example. John Adams and Benjamin Franklin also spent years doing diplomatic duties in Europe. This is saying a person can’t spend a whole life abroad and then show up to try to lead America. They were trying to make certain that the President would always have total loyalty to our country.
12.  No. Budgets originate in the House and are then passed by the Senate, and finally signed by the President. (See Article 1, Section 7.) The President can, however, outline a budget that would meet his priorities, which the legislature can use or discard as it sees fit. Since 2006, when Democrats regained the majority in the House, budgets have mainly been a series of continuing resolutions, which means something like, “We’ll just keep the same budget priorities as the past budget, with perhaps a percentage increase.” Even during the few years the Republicans regained the majority, threats of stonewalling until there were government shutdowns allowed continuing resolutions to become a habit.

13.  No number is given. Nine is the traditional and current number. There was a time that FDR threatened to “pack the court,” to add as many judges as he wanted to attain his desired political outcomes. The court at that time resisted for a while, but then gave in to his demands rather than subject the court to overt, permanent political partisanship.

14.  The Bill of Rights make up the first Ten Amendments. They weren’t originally included, because they were understood as obvious to the people at the founding. But then some worried that, if they weren’t included, a later people might not recognize these rights. The government does not grant these rights. Rather, government is strictly limited so that it does not infringe on these God-given rights. There are other God-given, or “natural” rights, such as parents’ rights to the care and upbringing of their children. In fact, the Ninth and Tenth Amendments make it clear that government only has those rights enumerated in the Constitution; all other rights are “reserved to the States respectively, or to the people.”

15.  Trick question: it does not appear anywhere in the Constitution. It appears in a letter from Thomas Jefferson to the Danbury Baptists, assuring them that no preferential treatment would be given to any other religious sect, thus negatively affecting them. Jefferson meant that government would do nothing to interfere with the various churches; churches were safe from government intrusion. It does not mean that any appearance of sympathy toward religion or religious people is prohibited. Nor is this phrase a part of US law. In fact, at the time of the founding, several states had state religions, which was not prohibited by the Constitution.

16.  This is the beginning of Amendment I to the Constitution. These two parts mean, first, that there will not be a state-endorsed religious sect—as was found in Britain and many European countries (and elsewhere) that the people in America had come from. Second, the federal government is to make no law that interferes, stops, hinders, prevents, or otherwise prohibits the free exercise of religion for people in the United States.

17.  In short, self-defense. You could add that, as the founders spelled out in the Declaration of Independence, a people needs to be able to defend against a tyrannical government.

18.  Article I, Section 2, third paragraph talks about counting population for purposes of representatives and taxes. The states with slaves wanted to count all their slaves as persons for representation, but not allow them to vote. The non-slave states worried that granting this advantage to the slave states would make it impossible to ever eliminate slavery. So they came up with this compromise—not to demean the worth of slaves, but to make it possible to eventually end slavery. Passed in 1868, the Fourteenth Amendment, section 2, eliminates the three-fifths phrase referring to slaves, because slavery had been eliminated through the Civil War and the Emancipation Proclamation. Two years later, in 1870, the Fifteenth Amendment was passed, guaranteeing all citizens the right to vote, “regardless of race, color, or previous condition of servitude.”

19.  The Electoral College is the way in which we elect the President. It allows for the people in their respective states to elect persons who will cast their votes according to the choice of the people in the state. A state’s number of electors equals the number of their Representatives plus their two Senators. The Electoral College procedures are described in Article II, Section 1.

[i] I give some help on these answers in a previous post, “The Enumerated Powers.”
[ii] https://history.house.gov/Institution/Apportionment/Determining-Apportionment/
[iii] Here’s how to do the math: https://www.census.gov/topics/public-sector/congressional-apportionment/about/computing.html

Posted by Spherical Model at 8:56 PM