I have two questions:

·         Do parents have the God-given right to determine the care and upbringing of their children?


Sunday’s Houston Chronicle had a lead investigative piece starting on the front page. It’s about the difficulty medical professionals have in identifying and dealing with possible child abuse. 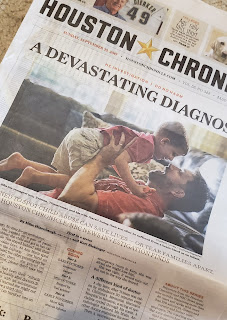 Much of the piece centers on a particular case, a boy named Tristan Timmerman. The nightmare started when he was four months old. At 3:00 AM the dad woke his wife, panicked because their baby was limp, not responsive, with eyes rolling back in his head. The mom, barely taking time to put on pants (no shoes) quickly drove their baby to the hospital while dad stayed home with their two older boys.

The boy was transferred to a children’s hospital, and brain scans were done. A neurologist assured them it was probably related to a difficult delivery and believed the condition would resolve in a few days, which it did.

But the ordeal wasn’t over. Another doctor looked at the scans and saw the possibility of shaken baby syndrome. This doctor, assigned to specialize in identifying child abuse, didn’t get the neurologist’s report.

As the Chronicle story says, “In their zeal to protect children, some child abuse pediatricians also have implicated parents who appear to have credible claims of innocence, leading to traumatic family separations and questionable criminal charges.”

In the Timmerman’s case, the child was not allowed to return home with the parents, who were now under investigation by Child Protective Services. The mother’s parents were able to take him and allow for the parents’ supervised visitations. After the first two weeks, they were asked how things were going, and in the questioning were asked what they thought had happened. They said truthfully that they did not believe the baby had been shaken—which was “not the answer the child abuse pediatric team was looking for.”

The mother reports that the pediatric team’s note, “read like a call to place her baby in foster care, or worse, an effort to persuade her parents to turn against her husband.” Fortunately, the baby wasn’t taken from the grandparents and put into foster care.

The Timmermans’ battle for their family lasted seven months, with much of the Timmermans’ time spent in attending court-ordered appointments and researching similar cases, discovering the many times certainty about shaken baby syndrome turned out to be not only uncertain by just plain wrong.

It took two months to get the baby returned to his mother, but an additional four months before the dad was allowed to be around his baby unsupervised. A few weeks later Child Protective Services dropped the case. And a year later they reviewed evidence and reversed the original findings of the investigation. In the meantime, the Timmermans had spent $200,000 to defend themselves against a case that should never have been brought against them.

There’s another case going on here in Texas that Texas Home School Coalition (THSC) has been helping with. Four-year-old Drake Pardo was illegally removed from his home, without warning or charges, on June 20th.

The boy has a number of health issues. During a recent hospitalization, his doctor had failed to even visit the patient. So the parents transferred his care to another doctor. This seemed to be a triggering factor. A doctor (the one who had failed to visit, or it may have been another at the hospital; I'm unclear on that), who had not seen the child nor reviewed his entire records, suspected that something like Munchausen Syndrome was going on—non-necessary medical treatment because of a mental illness of one of the parents. The doctor asked a question, which triggered an investigation.

But rather than do an actual investigation, CPS jumped to the wrong conclusion that the child was in imminent danger. Even the doctor with the suspicions never believed there was imminent danger or suggested the child should be removed from the home. She just asked for CPS to facilitate a meeting with the parents.

CPS refused for two weeks to reveal to the parents, or their representation, what the charges were. Eventually the doctor’s concerns were alleviated when the parents provided the fuller record of the diagnoses, which had been done by other doctors at that hospital and were readily available. At this point the doctor was fully satisfied, which should have ended the investigation and any problems.

But CPS decided they were going to keep the child, regardless. As they put it, the child was getting the same medical treatment the parents would be giving. No harm; no foul. They failed to create a family plan, as required by law, while insisting that the parents sign a statement admitting to their mental illness, or they would not be given access to their child. The parents couldn’t sign such a statement, since it would be a lie.

The Texas Supreme Court is stepping in on this case, which is very unusual. CPS has its own appellate court system. This intervention by the executive branch—the solicitor general and state attorney general—happens only rarely for CPS cases. There was supposed to be a response last Wednesday, but I believe it was CPS that asked for a continuance. That means something should happen this week. Meanwhile, the parents get occasional one-hour supervised visits, and their son gets no explanation for his trauma.

You can help with the family’s legal defense by donating at BringDrakeHome.com.

CPS’s suggestion that the only thing the parents need to concern themselves with is whether their child is getting adequate medical care feels like some dystopian world. 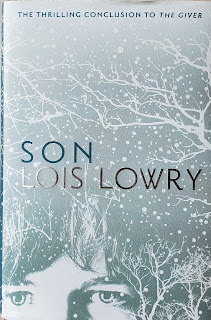 I’m currently reading Son, by Lois Lowry, the concluding book in The Giver series. The premise is, in this extremely controlled community within our contemporary world, a nebulous “they” makes all decisions for the very compliant people. At age 12, each child is given his or her life work assignment, and goes on to get whatever training that entails. As adults they can apply to be given a spouse, who is assigned to them. Couples may be granted up to two children, which are birthed by "vessels" called birthmothers—those assigned that responsibility, who are kept separate from the population, and who are inseminated with the child they carry. Nurturers take care of the new children from birth until the annual ceremony at which the babies are assigned to their families. It is at this point the babies are given names, rather than numbers, also assigned by the collective leaders.

In The Giver, there’s one boy, Jonas, who is selected at age 12 to receive the knowledge that the Giver, an older wise man, maintains. He is the only one to see color, to feel emotions beyond very simple innocuous feelings, or to experience real pain. In that book, Jonas’s father, a nurturer, brings home a baby that is failing to thrive, to have him sleep at their house so as not to disturb the night workers at the nurturing center. At the end of that book, Jonas realizes they are going to euthanize the child, and he makes an escape, taking the baby with him.

In Son, we follow the story of the baby's actual mother, Claire. Her parents were disappointed, as was she, that her assignment was only to be a birthmother, which, while valued as a necessity, is considered what they assign people to if they have no other aptitude. Her birth went badly and had to be done cesarean, and the decision was made to reassign her. She gets sent to work in a fish hatchery, where she has no particular interest.

She happens to discover where her baby went, what his number is, and keeps track of him—none of which is ever supposed to happen. No one is supposed to be interested in such information.

The summary on the book cover suggests that most of the story is mainly about the time after her baby son is taken from the community (by Jonas, so we’re looking back to The Giver), and Claire follows. So the rest of her story is beyond the community. But I’m 100 pages in, and that escape hasn’t happened yet.

There’s a part where Claire has visited her baby boy in the nurturing center, where she has volunteered from time to time to see him. No one knows she has made the connection with her son, which would not be permitted. As she leaves, she chokes back tears. She can’t enjoy her meaningless life at the fish hatchery; she’s obsessed with her son:

She wanted only to be with the child, to feel the warm softness of his neck as he curled against her, to whisper to him and to sense how he listened happily to her voice. It was not right to have these feelings, which were growing stronger as the weeks passed. Not normal. Not permitted. She knew that. But she did not know how to make them go away.
This is a dystopian novel. Of course a mother feels an affinity for her child, an aching to hold him. The novel is showing us that centralized control doesn’t work for human beings—that’s the point.

But here we are, in real-life Texas, and some CPS workers claim to have as great a right to control the care and upbringing of a child as the child's parents. They dismiss the reality that the parents and children have a right—even a need—to be together and love one another. They wonder why anyone is complaining. After all, the child is getting the right medical care. What else is there to be concerned about?

I can hardly imagine how painful this must be for good, loving parents. This preventable trauma should never happen to these families.

There are times when actual abuse does happen. It’s surprising how often those stories appear in the news. Children are left in dangerous situations until the unthinkable happens. Heavy caseload is blamed, to excuse the social workers who were vaguely aware of the danger but didn't act.

And yet these overworked CPS employees have time to pursue families in which the child is in no danger. Why?

Every session the legislature looks at CPS reforms. Maybe there are tiny, incremental improvements. But to the regular citizen out here, we don’t understand why a CPS worker can’t tell the difference between a truly abusive situation and a healthy, loving family.

I think that, unless and until CPS workers can tell the difference between good parents and those who are actually harming or neglecting their children, they should cease and desist. Maybe we could require CPS workers to prove that they have this discerning capability before they are allowed to do any casework. If that’s fantasy (and it probably is), then we need better guidelines. Something that will safeguard the good families while exposing the bad. And, as we see from the Chronicle story, trusting "experts" isn't all that useful.

In the meantime, when CPS makes a mistake that deprives a family of their child, they should be liable for damages—including all defense costs for the family, after-care to deal with the trauma, and damages that would at least be a token compensation for the pain of kidnapping the child. My knee-jerk reaction is to give the CPS workers jail time for kidnapping. If you can talk me out of that, then at minimum the workers involved should lose their jobs—and maybe they should be held personally responsible for at least some of the damages.

Parents do have the God-given right to see to the care and upbringing of their children. It’s one of those Tenth Amendment rights reserved to the people without the need to spell them out, because no one questioned that the people had those rights. Until we have the power to discern between good and bad, government shouldn't be in any sort of position to infringe on that right.

Posted by Spherical Model at 5:32 PM