A couple of weeks ago I mentioned a book I’ve been reading: Standing Up to Goliath, by Rebecca Friedrichs. She was the mother/teacher at the center of the Friedrichs v. California Teachers’ Association case that went before the Supreme Court in 2016, which was about to be ruled on when Justice Scalia died suddenly, leaving a 4-4 ruling, which reverted to the appellate decision favoring the union. 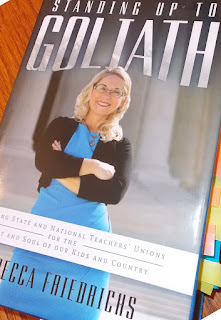 It took an extra couple of years, but the Janus case, ruled on last June, finally won against the labor unions. Workers who are not members of the union no longer have to pay fees for bargaining rights, because unions engage in politics even at the bargaining table.

This will apply also to teachers’ unions, which reduces their revenue and thus their power. It’s a start. Teachers’ unions need to have their power reduced. Curtailed. Abolished—even better.

Today I’ll go through some of the points in the book, and then we’ll cover the good news of the Janus case.

Unions Are about Power, Not Education

The book’s main question was, “Why were teachers being forced to support policies against their own consciences?” (p. 13).

Contrary to popular belief/propaganda, teachers’ unions are not about improving the educational experience or conditions for teachers, students, or parents; they are about gaining and wielding power for the union.

For Rebecca Friedrichs, that was a lesson that took years to learn thoroughly, from both inside and outside unions. It started when she was doing student teaching with a master teacher. Their classroom was great, and she learned so much there. But the classroom next door had a monster teacher, whom she refers to as the “witch,” continually yelling, screaming, belittling, and bullying students. “She would grad them, yank them into their places in line, and scream right into their little faces” (p. 12).

These were first grade classrooms. Friedrichs wondered why something wasn’t done to rescue these children:

As the Master and I were grading papers one day, I found the nerve to ask her how a mandated reporter like me could file a complaint about a teacher. The Master slowly turned to me, removed her glasses and locked into my eyes preparing, it seemed, to tell me a hard truth about life. “Today’s the day,” she said, “you learn about teachers’ unions” (p. 13).
The “witch” had tenure, so the union protected her, not the kids. Unions enforce a seniority-based LIFO policy (last in, first out), so that when layoffs are needed, newer teachers, no matter how good, are let go, while older teachers, no matter how bad, are kept.

Friedrichs tells the story of a California teacher, Bhavini Bhakta, who had been “Teacher of the Year” in 2012. Despite her effectiveness as a teacher, she had been laid off four times because of union-imposed rules (p. 17).

Another story was of a teacher with extra qualifications, teaching AP Statistics, Algebra II, and Pre-Calculus. No other teacher in the school had his accreditations. But he was laid off after his second year—despite heroic efforts by his principal to keep him—leaving the school unable to meet the needs of the students (p. 18).

Meanwhile bad teachers were moved around. It’s called “the dance of the lemons” (p. 25). One egregious example was inflicted on principal Eileen Blagden in a Southern California elementary school.

A teacher in the district had been on leave after a 2008 arrest for indecent exposure and lewd and lascivious behavior, and a subsequent charge of trespassing for which he pled guilty. Though he was found not guilty of the sex-related charges, a restraining order forbade him from going within one hundred yards of public parks, beaches, schools, and bathrooms in the city of Long Beach.
In 2009, Eileen’s employer, a school district located in a neighboring city of Long Beach, allowed the man back into the classroom but transferred him to Eileen’s school as a kindergarten teacher. Eileen was not permitted to know the man’s history, but could tell from the start that he was emotionally unstable, and he was even falling asleep during class (p. 26).
Other teachers were worried. In 2010 the man talked to colleagues about suicide and a desire to kill other teachers. Eileen asked the district to remove him. Instead, they sent a union representative who did nothing. And the district warned her against reporting to the police, which she was required to do as a mandated reporter of threats to children.

She nevertheless reported him to the Sheriff’s Office, along with the threat from her administrator about reporting.

Three days later, she was placed on five months administrative leave for not following a district administrator’s directive. There was an eventual trial concerning the retaliation for whistle-blowing, settled before trial—which included a confidentiality agreement. Fortunately, Blagden had told her story beforehand. Still, she was demoted, reprimanded, and eventually resigned.

Here are some of the union positions that probably differ from what you would want from anyone related to educating our children:

·         They’re against school choice—even, or especially, when it means protecting students from failing schools, bad teachers, or bullies. They do not believe parents are capable of making decisions in the best interests of their children.


·         They work diligently against charters, vouchers, education savings accounts, or anything beyond the status quo, which they control.
·         They’re in favor of diagnosing and drugging wiggly children who have a hard time sitting still in a desk all day—with less recess and play time than past generations.
·         Unions donations go to between 87% to 100% Democrat parties and candidates, and 100% to liberal outside groups (pp. 76-77).
·         They insist on sex education that is pro-promiscuity, pro-homosexual, pro-transgender, pro-experimentation, but anti-abstinence, anti-family, and anti-parental involvement—and anti-parental approval or ability to opt out of what’s being taught. Further, they withhold critical knowledge that would protect students from sexually transmitted diseases (p. 93). Lessons can be so disturbing that teachers protect themselves by paying for substitutes, but are unable to protect their students from the vile material.
·         They promote the LGBT agenda, and bully anyone—including any student—with a different opinion (p. 94).
·         They do not tolerate free speech of any sort that doesn’t coincide with their views. They use four psychological manipulations against anyone who steps out of line: fear, intimidation, isolation, and ignorance (p. 82).
·         They are anti-science, deleting the need for science education to be based on empirical evidence derived from valid scientific experimentation and verified by using the steps of the scientific process (p. 102).
·         They are unequivocally pro-abortion. They do not explain what this has to do with educating our children, but they work to make abortion available to children without their parents’ knowledge or consent.
·         They control the politics surrounding school board elections, by controlling teachers, so school boards end up being more pro-union than pro-student education.
·         The PTA stands with the unions; any parental or teacher input on policy is ignored, but if PTAs support education by filling classrooms during a walkout, they are punished by the unions (chapter 11).
·         Unions do not protect teachers from severe, dangerous discipline problems, particularly when the perpetrators are black, because of “racial equity discipline policies” (chapter 12).
·         They focus on race, indoctrinating students with “white privilege” guilt, and are against informing parents of this political indoctrination in the classroom.


If there’s something bad about public schools, there’s probably a union policy making sure it stays that way.

Could teachers opt out of paying the unions? Only partially. Until this year, they would still be forced to pay “Fair Share Fees,” which were automatically deducted from their paychecks, purportedly to cover the benefits they get from collective bargaining, along with the union teachers. The difference ranges from 0% to 30%. In those early days of the author’s career, the difference was about $50 a year out of around $1000 annually (p. 14).

Teachers were bullied into paying the full amount. One woman who was the lone holdout refusing to join the union in her school, was working on papers late in the evening when four men showed up and pressured her to sign on. The first time she was able to get them to leave by saying she would think about it. Then they cornered her alone a second time, and she believed they would not leave, or allow her to leave, and might do her physical harm, so she gave in and signed. It looks like a protection racket—organized crime. I believe that’s what it is.

If there’s one thing that would vastly improve public education, it would be the abolishment of state and federal unions. Possibly local unions too, but at least they are in touch with actual teachers and their issues. Leaving union dues in teacher paychecks would be an automatic $1000 raise for most teachers.

While the Friedrichs v. CTA case favored the union, after the death of Justice Scalia, there is a possible better future on the horizon. The Janus v. American Federation of State, County, and Municipal Employees case, decided in June 2018, went against the unions 5-4. Justice Alito, writing for the majority, said, “We conclude that this arrangement violates the free speech rights of nonmembers by compelling them to subsidize private speech on matters of substantial public concern.”

This case affects teachers’ unions as well as other public sector unions. They can no longer collect fees from nonmembers, which reduces their money—and thus their power—considerably. It also means they have less leverage to practically enforce membership. Predictions are that they could lose as much as a third of membership.

It may be that it’s even better than that. There is nothing in the ruling to say this is only from now going forward; unions may have to repay those fees they took by force from nonmembers, going back years, which could bankrupt them. We can only hope so.

If we are ever to find solutions to our public schooling, it will be in a free market, which brings innovation, and better outcomes for less money.

Posted by Spherical Model at 7:46 PM