The other day Mr. Spherical Model was commenting on how much he enjoys working with a particular client. The main person who brings him in on projects is especially pleasant. She’s high energy, has a good sense of humor, works well with others—on top of being good in her field of expertise.

They had an exchange over the weekend about postponing a scheduled meeting because of a family emergency, and Mr. Spherical Model said he’d be praying for her. And she thanked him and said that, because he’s such an angel, she’s sure the prayers would be answered.

Other people at that company are also great to work with. They’re kind of our favorites right now.
For whatever reason, the company appears to be a majority black, plus a fair amount of Hispanic, at least here at the office we’ve worked with. But color doesn’t seem to be an issue. It has never come up in any of our discussions. Since we are the minority there—one that the media would tell you is privileged and all kinds of negatives—it’s nice to be treated as though we’re just additional great people to work with.

In other words, it’s about content of character, not color of skin.

Politics have never come up. Family values may have come up at times. Respect for co-workers and customers comes up frequently as part of the job. Part of the company’s ability to prosper depends on workers treating customers with respect—even when, or especially when, they have complaints.
Everybody prospers when people treat one another as valuable human beings.

Skin color is so irrelevant that we never talked about it, except looking at the situation around the time of Martin Luther King, Jr.’s birthday. Our experience is that his dream is reality, which is worth saying.

The irrelevance of race is our experience, in general. We encounter a pretty wide array of races and ethnicities in the very cosmopolitan salad bowl that is Houston, Texas. In church. In Scouting. In community organizations related to politics or service. In business.

That’s why it’s so puzzling when the media story is that the country is so hateful and racist. I don’t believe it. It’s not that the evil of racism is non-existent; it’s just that it is anathema to civilization, so you don’t find it except where savagery wins.

We saw an example this past weekend, at the March for Life. A group of Catholic students from Kentucky was gathering near the Lincoln Memorial after the march, and after some sight-seeing, to wait for their bus.


A group of adults came at them, shouted vile epithets at them, tried to provoke them (unsuccessfully). A Native American man, playing a drum, walked into the group, banged the drum in the face of a young man, whose personal space was invaded, but the boy was respectful.

This is all on video. But the media attacked the boys, falsely telling the story, editing video to create the negative story about them they wanted, claiming the chant was done as they surrounded and attacked the Native American man to taunt him. (There’s a good retelling of the entire story here.)

There were two racist elements in this kerfuffle involving Catholic boys who favored ending abortion. One was that the adult group attacking the boys was black. Not a typical black group, but what some have referred to as a cult of black supremacists called Black Hebrew Israelites. They are a known group; they do this kind of attack frequently. Any journalist who has spent time in New York or Washington, DC, has likely encountered these people and knows exactly who they are and what they do, so they would have known without any confusion that they were the ones attacking the boys, not the other way around.

The other racist element was the Native American, Nathan Phillips and those with him. He used his race to lie about being a victim when the boys had done nothing wrong—and in fact were very respectful to him, considering his purposeful entering of their group and playing his drum in their faces. One of his companions shouted at the boys, apparently trying to provoke them, and told them they had stolen the land and should go back to Europe.

I don’t know about the black group’s protest purpose for the day, but it was footage from their video—an unedited hour and a 46 minutes—that shows them shouting vile things at the boys, and records the boys shouting only school cheers in an attempt to cover up the vile words being hurled at them.

The Native Americans were there for a demonstration, completely separate from the March for Life, that just happened to coincide nearby. Whether the man with the drum actually thought the boys were attacking the black men, or was simply lying, is hard to know for certain. But his actions and those around him show no evidence of racism from the boys—only towards them.

Social media attacked the boys. One of their chaperones was on Glenn Beck Radio this morning. If I understood her story, their school website was hacked in an attempt to get the boys’ names and private information to “dox” them (which included boys who hadn’t even been on the trip).

The media, aided and abetted by social media, served as accuser, judge, jury, and executioner for some boys on a school trip. Young boys. Teenagers. Who believe in protecting the unborn. Based on a brief video clip—purposely clipped to prevent showing context—that in itself shows them doing nothing wrong, but is used to foment hate towards them anyway. 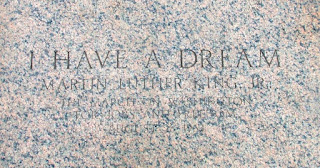 This attack happened on the very steps in front of the location where Martin Luther King, Jr., gave his “I Have a Dream” speech.

Two things can be true simultaneously. One is that, for the vast majority of Americans, MLK’s dream has come true. The other is that, for those who want to find racism, they’ll create it where it doesn’t exist and use it for their own racist purposes. What we need is for that second thing to be even more rare.

Maybe we all need to make it a practice to take a step back, from any media story—or any anecdotal story we encounter—and wait. See if more context or detail comes out. In the meantime, give people the benefit of the doubt. Because most of America is made up of people who like each other and don’t even understand what the anger is about. In our civilized lives, racism is not part of our personal experience.

Posted by Spherical Model at 7:30 PM