Tomorrow is the day legislators take their oaths of office, and then the biannual legislative session can get underway here in Texas. It seems early to me. I was aiming to think about that later in the month. But I’ve gotten underway. 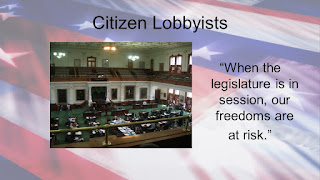 I was asked to speak at our local Tea Party meeting this past Saturday on how to do citizen lobbying, and specifically how to follow bills during the legislative session. So I thought maybe I’d share some of that here. Even though the specifics apply to us here in Texas, the ideas can be true anywhere.

There are essentially four ways citizens can participate in government:

If you’re reading this, chances are you’ve been voting ever since you had the chance. Another step up is to participate with a party—by voting in a primary, attending a precinct meeting (usually on the day of a primary election, held afterward), becoming a delegate at a convention, or maybe even becoming a precinct chair. I’ve done all these. Campaigning is fairly new to me. But you may have done that if you knew a good candidate, or if you got inspired by one. Maybe you’ve just put out yard signs, or put a bumper sticker on your car; that’s part of campaigning.

Today we’ll mostly talk about lobbying our representatives. Lobbying simply means seeking to influence or persuade. You’re entitled to do that with your elected officials; they represent you, and they can only do that effectively if they know what your views are.

Citizen lobbying is different from paid lobbying. You don’t have to do any reporting to government about what you do. You’re just doing your civic duty by expressing your opinions to your elected lawmakers.

As they say, “When the legislature is in session, your freedoms are at risk.” You’d better let them know you’re watching, and you have certain expectations of them.

Even though it’s your right—and obligation—not everybody does it. There’s sort of a formula for figuring out how many constituents hold a view, based on how many express their opinion. It used to be that a letter had a greater impact than a phonecall, but after the powdered poison in the mail scare of the early 2000s, they’d prefer something other than a letter, although you’re still entitled to send one. Anyway, a letter, phonecall, or email is estimated to represent somewhere between four and ten constituents with that opinion.

If you do a phone, email, or letter contact, you’ll want it to be brief and focused:

·         Make a specific request (support this bill or issue, oppose this bill, amend this bill).
·         Give 1-3 brief, clear reasons supporting your opinion.
Your request and opinion will be logged in a system and counted, so the elected official will have it as a reference.

There’s one more way to make contact, and that’s what we’re mostly talking about today: an in-person visit.

An in-person visit represents about a hundred constituents with that opinion. If you are willing to show up at your legislator’s office, he’s going to assume you take the issue seriously. And if you feel that strongly about it, so will many others who didn’t have the time or resources to make the trip to the legislator’s office.

There’s going to be an office at the capitol, and also in the local area. That’s true for US Congressman and Senators as well as for state representatives and senators (or whatever those positions are in your state). A capitol visit is bolder—and therefore maybe more persuasive—than a local office visit. But if you can’t make that trip, the local office visit still has about a ten-fold impact over an email. Also, you can visit about just a single issue, or about multiple bills or issues at the same time, since it’s obvious you’ll want to make the most of your time during the visit.

About four legislative sessions ago (Texas legislature is in session for about half a year every odd year), I was talking at a Tea Party meeting about contacting legislators with your opinions, mostly referring to what to do if you visit the capitol. And someone said, “But couldn’t we visit their local offices?” And then somehow I got assigned to set up those visits, and have a bill list we were following. And I’ve been the de facto legislative liaison for our Tea Party group ever since.

I was surprised that interest in these visits is even bigger this year than in the past. I feel anxious to do my part well. So far I’ve listed what I think will be our legislative priorities—based on what we’ve worked for in the past, and what we settled on last year at the district and state conventions. Platforms are a good source of possible legislation, which is why they tend to be longer and more detailed than most of us would prefer. But legislators do actually refer to them.

We’ve had a couple of innovations in the Republican Party of Texas. One is that we hold an up or down vote on each plank of the platform. (After discussion and acceptance of the platform language, we fill out a scantron sheet saying yes or no to each plank. Pretty much no plank gets removed at this point, but you can see varied strength of support.) We’ve done this for two conventions now.

This year another innovation was to organize the platform according to the state senate committees, making it easier to identify legislative possibilities. Also, we had a new committee for Legislative Priorities. They went through the platform and the ideas from the various local conventions around the state, and then determined what they thought were the top priorities for the upcoming legislative session, which the whole body at the convention discussed and approved. So we’ve got those to go by as well.

I’m looking at the priorities, and then identifying bill numbers. Many bills have already been filed, but it’s a matter of identifying the ones we think will do the job we hope for—or are at least a good starting point from which amendments can be added. So I’m building our bill list.

I expect to start scheduling visits with legislative offices by late January or early February. And then we’ll be making a visit about every other week. For most of those we’ll meet with the local staffer, rather than the legislator. But occasionally a legislator will be in town. Even visits to the capitol, unless you’ve made a specific appointment, you will probably meet with staffers rather than legislators.

Staffers are trained to take note of what we say, and our reasons, and put the information into the system. They do not, as a rule, express the representative’s opinion—unless that opinion is widely known and very clear, such as if the representative authored the bill. So don’t expect agreement when you make your visit. But that also means, if they’re not of your party or not in agreement with you, they will still listen respectfully and log your views.

Here in Texas we have a pretty good online system for tracking bills, and for finding other information about the legislators and legislative session. So, at our Tea Party meeting on Saturday I shared some of that.

You can go to the Texas Legislature Online (https://capitol.texas.gov/) and set up an account (My TLO), and then set up bill lists and alerts, so you can follow the bills you’re interested in throughout the session. That means you can know when a bill is moving, or when a committee is hearing testimony on a bill, or when a vote has been taken and how that turned out.

You can follow a bill through all the stages—which includes several stages in the House or Senate, wherever it originated, followed by similar stages in the other house when it gets there, and then sometimes reconciliation when changes were made in the second house. The final stage is the governor’s signature.

Most bills die somewhere along the way. (Watch Schoolhouse Rock’s “I’m Just a Bill” for a refresher on that.) Last session there were a few of the bills we watched that made it through. Many more didn’t, so we’ll be working on those issues again this session. We have better leadership in the House this session, so that could help, although the majorities are smaller.

The point is, there is something you as a citizen can do to make a difference. I’m just a regular citizen. Any knowledge I have is just what I’ve gotten along the way, by giving it a try and learning as I go.

A citizen has a role to play in the government. A subject does not. I much prefer being a citizen, rather than a subject. That’s why I do what I do.

This has been a "how to" informational post. Another day (or several separate days) I may cover what the actual issues are this legislative session.

Posted by Spherical Model at 6:27 PM