Two thousand years ago, wise, learned men searched the skies until they saw the long-awaited star. And then they followed it to the source of all light and wisdom. Wise men today still seek the light and follow the star.

That was the theme of this year’s Christmas card. Since my first grandbaby was born, I have been using the grandkids as part of a nativity scene for the Christmas card. Some years are more challenging than others. For example, the year I wanted Mary and Joseph to have a real donkey. The donkey we were able to use was feral; he held still only with bribes of many carrots. To be honest, Mary nor anyone else could have ridden that donkey to Bethlehem.

This year I wanted wise men and a camel, but I had no idea how to accomplish that.Then, a few months ago Mr. Spherical model obtained a green screen for some videos he’s making for the business. And that opened up possibilities.

Mr. Spherical model had traveled to Saudi Arabia about five years ago for business, and had done the tourist thing of riding a camel. There was a good snapshot of him with the camel kneeling down to let him off. I thought if we staged him, in thobe (Saudi clothing he got while there) and added the grandkids visiting at Thanksgiving in kingly outfits bearing gifts, in such a way that it would look like PaPa was still on the camel, and the children were in front of it, we could use the green screen and photo editing.


I don’t really know how to do photo editing, beyond a few very basics. But I figured I could learn. I had planned to use Mr. Spherical Model’s lighting set up and my camera. But he insisted his camera was high resolution and would work—and would have the advantage of showing us pretty immediately afterward on his computer if we had everyone placed the right way.

I took just a few photos with my camera, from right next to his, just to say I did it. Because the project is supposed to be my effort, and it turned out I wasn’t doing anything but dressing the kids and trying (a very big job) to get them to focus on the task long enough to get it done. Son Economic Sphere was manning the computer, so they could take multiple shots one after another as Mr. Spherical Model came to sit on the chair that was a bit too low. That way they could choose the shot that turned out to be just the right height. 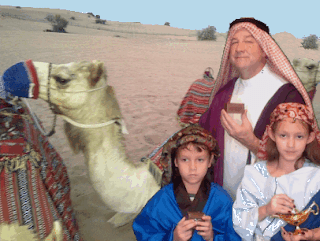 Unfortunately, since he had used that camera mainly for video, and wasn’t very experienced with still photos, he made a mistake in setting the resolution. It had plenty of pixels, but the final looked pixelated to me. And the royal wise men didn't look very happy about reaching their destination.

This was now a week after Thanksgiving, with no chance to re-shoot. I wondered if the resolution would be good enough when printed as a small snapshot for the card, but I didn’t like it.

So I took a look at what was on my camera. There was a single photo in which no one had a tongue sticking out. I thought I’d give it a try.

I used various online tutorials to learn how to turn the background into an even green screen, separate the image I wanted, and combine that image with another photo—and then get them to be sized to match. I’m sure it’s pretty basic stuff for someone who does this all the time, but I’m a novice.

Anyway, despite the panic I felt about all my plans going awry, we got something acceptable. The original snapshot isn’t quite as clear as the three wise men I added to the scene. But it will do for our very amateur purposes. 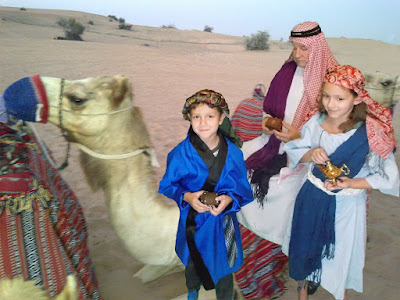 The thing about life is, there are a lot of things beyond our control, no matter how well we plan. I’m learning, maybe more this season than ever, to just do what I can and then trust. God smiles on me when I am trying to do something good and giving.

The other message with this card is, “May you find the light you seek.” And I send that message to you this Christmas as well.

Posted by Spherical Model at 8:32 PM