Long ago I had a job that included quality control for language translation software. My assignment was to find errors, to see if I could make things go awry. It was kind of a fun game. I had a few challenging words I’d try out, like “fitting,” which can mean a lot of different things, and be used as a verb, a gerund, a noun, an adjective…. Fun times in grammar world.

What happened when I found an error was, I showed the results to the programmers, and listed the things that didn’t work. Then they worked on those things—and generalized somewhat to avoid similar errors with other words. And then they had me try to blow it up again. When I finally gave my approval, we called it “Lindacated.” And everyone had a little celebration.

What didn’t happen was, “I found an error, so you need to start over.” Because there was a lot that was right with the program already. We didn’t want that to get thrown out. That would be a waste. And starting over, or even doing major reworking, would introduce new errors.

People have different approaches toward errors and imperfections. Maybe it’s a personality proclivity to see something wrong, and focus on that, to the exclusion of all that’s right. But one example of imperfection does not require outrage, activist energy, and major interventions.

Take a look at our Constitution. It’s a formula for protecting our God-given rights in a way that offers maximum freedom, prosperity, and civilization. And yet that isn’t accepted as truth. We have people who say that, because our founders didn’t write it to instantly wipe out slavery, which pre-dated this nation and its Constitution by all the previous millennia, therefore the Constitution is basically flawed and should be ignored or thrown out—or overthrown, which is how changing the form of government works.

Would it have been nice if the Constitution had been able to accomplish that eventual outcome, which was in our Declaration, that “all men are created equal”? Yes. But the Constitution did set that process in motion. And no other such document had ever accomplished it by that time either.

Another example is the criminal justice system. Say a black man is killed in an altercation with police. Some questions have to be answered about that. What were the circumstances? Was there reason to believe the person a threat to law enforcement or the public? Did police follow procedures? These questions are asked, as a matter of policy, whenever a police firearm is discharged, with much greater scrutiny when someone is killed.

So that policy backdrop is like the Constitution. It’s a structure in place to make things as right as possible in a world where a lot of things go wrong. It didn’t do all that we would now wish for, so does that mean we should throw it out and start from scratch?

Sometimes law enforcement makes a mistake, and a death or injury happens that ought to have been avoided. When that happens, we need to look at what happened, look at policies, fine tune them as needed, in an attempt to prevent such errors in the future.

What shouldn’t happen is a wholesale distrust of all law enforcement, with accusations of racism and hatred and purposeful murder. There’s a lot right with our law enforcement system; we don’t want to lose that as we look at what we can improve.

Another example might be calling “systemic racism” in a country where it’s hard to find examples of actual racism, and it’s practically impossible to find examples of racism that are widely accepted by any major portion of society. Can we find an outlier or two? If we look, yes. Should we label all of society racist, then? No. There’s a lot of society—the vast majority, and the totality of any civilized portions of society—that believes we’re all created equal, and we actually do judge each other based on character rather than skin color. Do we want to throw out those good parts because we aren’t all of us 100% perfect?

Are there men who treat women inappropriately? Yes. And we have too many examples. But that doesn’t nullify the goodness of the vast majority of men in our lives, contributing to our civilization. We can’t allow disposing of due process and the idea of innocent until proven guilty just because some women have been abused. Abusing men with a loss of justice is not an acceptable trade off.

Wherever we look at disagreements in political issues, we’ll find examples. The ones I’ve given are from a particular side. It’s not impossible for conservatives to extrapolate faults as well; most of us see Obamacare as something that should be thrown out entirely. But that’s because Obamacare itself was an overthrow of the healthcare system—because insurance is too expensive for some. (We’ve discussed elsewhere why government interference caused that problem, and why less government and more free market would be the solution.)

So, yes, I have a particular view on this. Nevertheless, I’d like to suggest a better way, in the spirit of the celebration this week.

There are two ways of looking at reality: with a critical eye, or with thanksgiving.

Is there a place for a critical eye? Yes, when we need to improve something. But it should be in the spirit of appreciation for what works, so that we do not lose what works and introduce even more new things that do not work. 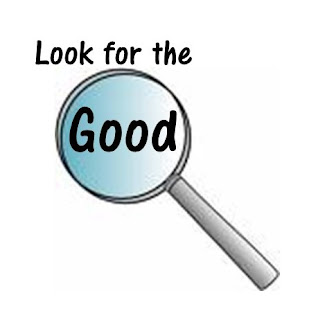 So here’s the action plan: when something comes up, something emotional, that makes you think, “Something’s got to be done to rectify this!” take a deep breath. Wait for more details. Look at the overall system, and especially look for something positive in the overall system. What’s working? Get a broader perspective, away from the pinpoint of the event. Only then can you see how the “problem” fits within the overall picture.

After that, you might realize all that’s needed is making sure the in-place procedures are followed to lead to the best outcome under the circumstances. Or maybe there are only small adjustments needed. Think of the energy you’ll save by not crusading for revolution when a little tweaking will do more good—and less potential harm.

It’s a more peaceful approach. Less driven by emotion of a particular event, without a fuller perspective. More likely to preserve the existing good.

Look for the good. Appreciate what’s good. Be thankful for what is already working. And then improve things with wisdom.

Posted by Spherical Model at 9:28 PM