Truth Before It's Too Late

It’s an act of faith to live in truth.

If existence is good, then the clearest and cleanest and most correct relationship with it is also good. If existence is not good, by contrast, you’re lost. Nothing will save you—certainly not the petty rebellions, murky thinking and obscurantist blindness that constitute deceit. Is existence good? You have to take a terrible risk to find out. Live in truth, or live in deceit, face the consequences, and draw your conclusions.[i]
Peterson asserts that it is lie upon lie that brings us to what appear to be unavoidable crisis points. He talked about one such point in one of his podcasts. Someone challenged him with this dilemma: “You have said that the only moral absolute is always to tell the truth. What if you have Anne Frank in the attic and the gestapo at your doorstep?” Here’s his answer:

Then I would say that there have been a lot of lies that have got you to that point. So, you may be in a situation where you’re damned if you turn right, and you’re damned if you turn left. And what that means is, you made a lot of mistakes along the way.
So, if the totalitarians are knocking at your door, if totalitarians are knocking at everyone’s door, that means everyone should have spoke up a lot sooner. And then they wouldn’t end up in a situation where the gestapo was at the door and Anne Frank was in the attic.
Now and then you end up in a situation where you’ve made so many mistakes that all you’ve got is hell around you. And that was certainly the case in Amsterdam when the Nazis came in. I mean, the Dutch are an admirable people. And I know they were invaded by the Nazis and that’s a terrible thing.
But many many many many people made many terrible errors for all of that to occur…. This is the answer. You be awake, and you make sure everything your society does doesn’t lead to the point where the gestapo’s at your doorstep and you have Anne Frank in the attic. It’s a little late to be thinking then, I would say.
He frequently mentions Aleksandr Solzhenitsyn’s The Gulag Archipelago, in which the author analyzes, as Peterson describes it, the “direct causal relationship between the pathology of the Soviet prison-work-camp dependent state (where millions suffered and died) and the almost universal proclivity of the Soviet citizen to falsify his own day-to-day personal experience, deny his own state-induced suffering, and thereby prop up the dictates of the rational, ideology-possessed communist system.”

In other words, he took responsibility, at least for his own part in the situation he had come to. But once he finally came to tell the hard, unvarnished truth, it changed the world. As Peterson says,

No educated person dared defend that ideology again after Solzhenitsyn published The Gulag Archipelago. No one could ever say again, “What Stalin did, that was not true communism.”[ii]
These big, state-sponsored lies lead only into darkness. As we say in Spherical Model terms, they lead to tyranny, poverty, and savagery—always down and away from freedom, prosperity, and civilization. You can’t create anything but hell when your building material is deceit.
There are big lies and little lies. In his book, Peterson quotes Hitler, from Mein Kampf, as recognizing the power of the big lie[iii]:

[I]n the big lie there is always a certain force of credibility; because the broad masses of a nation are always more easily corrupted in the deeper strata of their emotional nature than consciously or voluntarily; and thus in the primitive simplicity of their minds they more readily fall victims to the big lie than the small lie, since they themselves often tell small lies in little matters but would be ashamed to resort to large-scale falsehoods. It would never come into their heads to fabricate colossal untruths, and they would not believe that others could have the impudence to distort the truth so infamously. Even though the fats which prove this to be so may be brought clearly to their minds, they will still doubt and waver and will continue to think that there may be some other explanation.
Peterson follows up, saying that big lies are made up of multiple little lies: 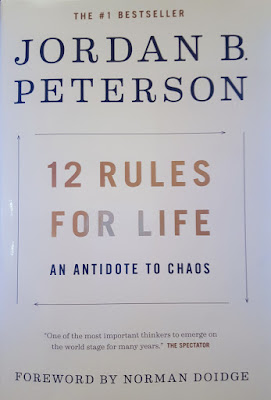 First, a little lie; then, several little lies to prop it up. After that, distorted thinking to avoid the shame that those lies produce, then a few more lies to cover up the consequences of the distorted thinking. Then, most terribly, the transformation of those now necessary lies through practice into automatized, specialized, structural, neurologically instantiated “unconscious” belief and action. Then the sickening of experience itself as action predicated on falsehood fails to produce the results intended.
The big lie that communism—or socialism, its synonym—is about fairness has always been illogical, and yet believed by the masses. It isn’t about making everyone equal, for the sake of fairness; it is about making everyone subservient to the wielders of power, and enforcing that subservience by policing people’s every deed and their very thoughts.

How could a national leader tell such a big lie? Well, boldly. The masses are more gullible about big lies, because of their audacity. It seems too incredible to believe it could be a lie.

But it had to start smaller. Something like, “We were treated unfairly,” “Everything bad we suffer is the fault of our enemies,” “Those who treated us badly are evil scum,” “They are beneath us,” “They are beneath our contempt,” “Everyone who isn’t us is beneath our contempt and doesn’t even deserve to live,” “Our being in power is the only solution for a world full of worthless scum,” “Wipe out the subhumans and ensure our power forever!”

It could start, alternatively, with “We deserve the fruits of the labor of our enemies,” “We must take what is rightfully ours, and they must submit to our right to rule over them.” That’s a short trip down the same road.

It starts with a relatively small divergence from a known truth—until the truth is nigh unto forgotten, or no longer recognized as true.

Here’s an example. The truth about humans is that we reproduce with a long gestation period and an extraordinarily long time of growth to adulthood and independence. The best way humans handle that is with a committed mother and father together raising their children to adulthood. Even though we know this, and have seen this truth played out over many millennia, people lie about it:

·         Sex doesn’t need commitment.
·         Men get sex without commitment, so women should too.
·         A woman shouldn’t be “punished with a baby” (to quote our past president).
·         It’s just a clump of cells.
·         It’s a woman’s choice.
Abortion has never been about value-less choices. It has always been about escaping the natural consequences of behavior that was a lie to begin with. What could have been “I offer you myself to show our forever love,” instead becomes, “I get what I can in the moment to serve my lust,” and “The loss of a subhuman life is mine to snuff out at my convenience.” The lie leads to an ugly way to live.
And before you realize it, you have 50 million babies murdered in the womb. A quarter of a million black babies a year are murdered in this country—more than are born; we’re supposed to believe that’s not racist? Or just plain evil?

Here are some other lies that lead to bad ends:

·         It’s unfair for some people to make a lot more money than others. I’m really thinking of the poor when I advocate taking from the rich.
·         You always have to believe the accuser—unless the accuser is accusing someone you agree with or you just don’t like her.
·         You should “shut up” (as Hawaii’s Senator Hirono demands) if you’re not a woman, or a person of color, or an LGBTQ… person, because your tribe matters more than your individual morality.
·         We support the right self-defense, but we need stronger gun laws; no one needs a gun. And we totally trust government to be the only holders of weapons.
·         Almost all of us in media vote Democrat and favor leftist ideas and causes, but we’re totally unbiased in our reporting.
·         People are just hiding behind religion as an excuse to discriminate against LGBT people, so they should be forced to act against their conscience.
·         Our enemies are wrong, so they should not be allowed to speak, so shutting them down by any means necessary is justified.
·         The other side does it, so we’re justified in doing it back to them.
This week we’re looking at this one:

·         Of course someone who is a lifelong activist in leftist causes would have no ulterior motive in accusing a Supreme Court nominee of sexual assault 36 years ago without any corroboration.
We've covered this for a week already. Do we need to follow the trail? A partisan block of senators takes their “advise and consent” role to mean “sabotage and prevent,” certain that their goal is justified by any means necessary. Everything they do is colored by that fact. Here's what has happened this week:
·         Daily the accuser’s story appears less plausible and more contrived. There are witnesses who have refuted her claims about her flying, her claustrophobia, her need for a second front entrance in her house (which was put in for renters, with no discussion about her fears, several years before her first claims of assault to a therapist), and her claim to know nothing about polygraphy.
·         Meanwhile, the chant is raised that, because the man Kavanaugh got upset during the hearing, when accused of attempted rape—and even gang rape by another discredited accuser—suddenly his temperament is not judicial. (They still seem unaware that their behavior is un-senatorial.)
·         The FBI report is complete; no additional evidence was found. Even though this took the full week the opposing senators had requested (a single day would have been adequate, because all the possible witnesses had already offered sworn statements), the opposing senators and their complicit media now claim it couldn’t possibly have been a thorough investigation, and they’re appalled, supposedly.
But the vote will be held, due to surprising and uncharacteristic grit from the Republicans. And then we will find out whether these lying senators, who never cared about the woman, and never cared about the truth, and never cared about justice have set a pattern that works for their purposes, that they will continue to practice in the future, or whether they are set back a step and we have a chance for society to move away from that darkness.

One more Jordan Peterson quote from the book:

To tell the truth is to bring the most habitable reality into Being. Truth builds edifices that can stand a thousand years. Truth feeds and clothes the poor, and makes nations wealthy and safe. Truth reduces the terrible complexity of a man to the simplicity of his word, so that he can become a partner, rather than an enemy. Truth makes the past truly past, and makes the best use of the future’s possibilities. Truth is the ultimate, inexhaustible natural resource. It’s the light in the darkness.
See the truth. Tell the truth.[iv]
Let’s hope we’ve called for truth soon enough this time. So we don’t find ourselves with Anne Frank hiding in the attic while the gestapo is at the door, and it’s too late.