L-Shaped Recovery and the Trampoline Effect

Some years ago, I talked about government interference affecting the economy. There’s a pair of posts: Parabolas and The Trampoline Effect. When there are downturns in the economy, there’s usually a natural rebound, forming a parabola, like a U. The bounce back usually reaches and exceeds the start of the fall pretty quickly. But if government steps in to “help,” or interfere, then you get something more like “help” on a trampoline, when someone steps in purportedly make the bounce higher. That help disturbs the natural up and down, and takes the energy out of the bottom of the bounce, so you don’t go back up. You just sort of stumble, and the trampoline flattens. And then you have to get going again from scratch.

In economist terms, this is an L-shaped recession recovery, instead of the usual U-shaped recovery.
Here’s the definition:

L shaped recession—refers to a period of stagnant recovery after initial fall in GDP. Even though technically the economy may have positive growth (e.g. 0.5%) it still feels like a recession because growth is very slow and unemployment high.
You know the phrase, about the scariest words: “I’m from the government, and I’m here to help.” Government’s role isn’t to interfere, or intervene. It’s to set up the background for free enterprise to take place.

There are a number of measures of how well the economy is doing. Growth in GDP is one. In fact, a recession has a specific definition related to GDP: "a period of temporary economic decline during which trade and industrial activity are reduced, generally identified by a fall in GDP in two successive quarters."

The converse is that two successive quarters of growth, however minimal, signify the end of the recession. But in an L-shaped recession, getting to technical recovery likely takes longer, probably over a year, rather than merely months. But getting back to starting position can take much longer, multiple years. 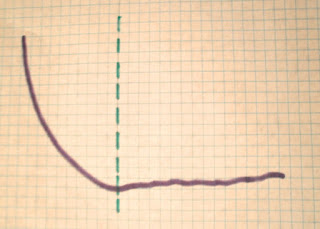 Such a "recovery" can take so long that various opinions may start calling it a square root-shaped recovery, meaning that, instead of ever getting back up, we should expect a new, permanent, lower growth reality. Obama and George Soros agreed on this "just the new reality" description of the 2008-2009 Great Recession. The malaise economy of Jimmy Carter was also described as a new normal that turned out not to be normal, after a bit of a Reagan tax cut.

And the Great Recession wasn’t a square root-shaped “recovery,” we now know, because the malaise of extremely low growth wasn’t permanent. It went away as soon as we had a government regime change that made necessary changes. They haven’t been extraordinary changes: lower taxes across the board, and concerted attempts to get rid of burdensome regulations.

We didn’t have to get all the way to the ideal lowest possible tax rate, just better. And we didn’t have to get rid of all burdensome regulation, just go in that direction, and stop the threat of ever more regulations that could be placed at any time, causing businesses to be wary about investing and growing. When people are free to make use of their own money, and can plan without government-induced uncertainty, that's the energy we need to get the economy moving back upward.

We can see some examples of the L-shape in various charts. A typical chart for showing recessions is GDP growth. This one, from the Center on Budget and Policy Priorities (CBPP)[i] 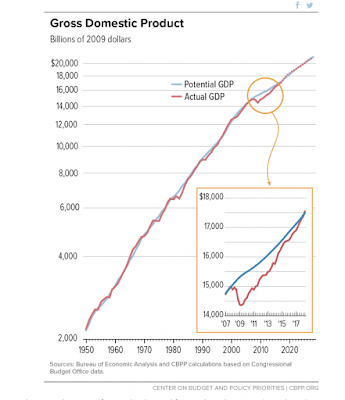 Because growth, by definition, rises, in order to see the parabolas and other shapes of recessions and recoveries, you need to turn the chart somewhat sideways, so the rise line is horizontal. The green is to show the L-shape. 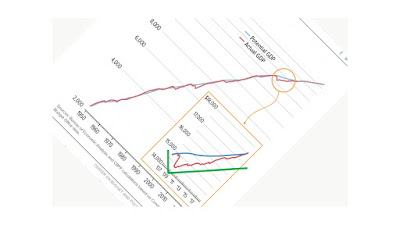 Besides GDP growth, there are some other measures. One is unemployment. Here’s a comparison of recent recessions and up to five years out.  In this chart the U-shape, or parabola, is upside down, because we want unemployment to be low. It goes up during the recession and down afterward. You can see that the unemployment spike was a bit higher in 1982, but by one year out had reached its starting point, and then continued dropping. The 2009 recession went higher half a year out, had some downs and ups for a year and a half, and afterward only slowly began dropping back down, taking seven years or more to reach pre-recession rates. 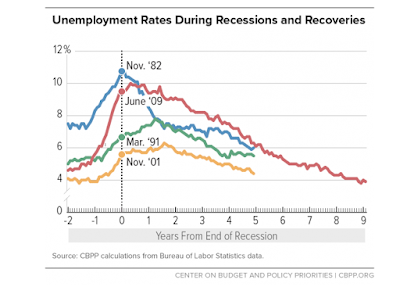 It’s possible for unemployment to go down even though there are more people not employed. Unemployment is measured by taking some combination of people applying for unemployment benefits and polling. That misses people who would be looking for work in a less hopeless economy. People who can’t find work could try to get more education, or could be just staying home. They don’t get counted. So another way to look at economic vitality is the employment-to-population ratio.

This one gives us a really clear picture of the L-shaped recession/recovery. I’ve highlighted the Great Recession in green, and in yellow are a few other more typical recessions with a quick rebound. On this chart, it looks like there might be another L-shaped recession just after 1960. 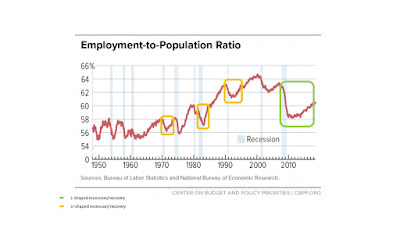 Another chart that shows the L-shape is average private sector hourly earnings. The housing and banking bubbles burst in the last quarter of 2008, which precipitated the drop. They didn’t start to rise again until 2015, and we’re still quite a distance from the starting point. The source for this chart seemed certain, later in the article, that things would have been much worse without the government interference. It’s hard to show an alternative version to use for comparison, but it is my assertion that government interference caused the intensity of the problem as well as the continuation. 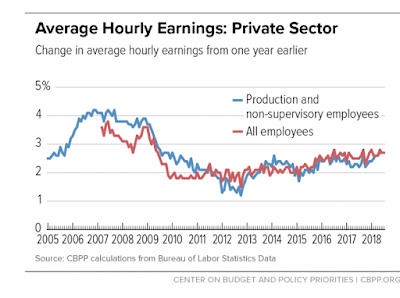 The 1929 market crash was similar. It was beginning to right itself within months, but then government stepped in with one intervention after another, intensifying and continuing the pain for more than a decade. It wasn’t the war that ended the depression, because there was so much to produce for the war; it was that FDR focused on the war instead of the economy, and he largely quit experimenting with ever more interventions.

There was some good news from The Heritage Foundation's 2018 Index of Economic Freedom. We used to be ranked “mostly free,” but had been less free since the beginning of the Obama administration—or maybe since the legislative takeover by Democrats two years before that. Now we’re moving back toward freedom.

The United States, ranked “mostly free,” had not been performing well in the index over the last decade. That precipitous slide has now fortunately come to a halt, with signs of renewed economic growth reinforced by major regulatory and tax reforms that elevate business confidence and investment. It is notable that the U.S. economy grew at a rate of about 3 percent in the last three quarters, something that economists said was very unlikely just a year ago. For the first time in a while, the United States isn’t just economically stronger. It has a real chance to become economically freer in the coming years.

We’ve had two additional quarters of higher growth since that assessment last February. So the news is even better.

When somebody interferes with your jump back up on a trampoline, it takes some regathering your balance and re-energizing your jump. And that gets harder when the “friend” keeps their hand on the trampoline. But once they get out of the way, the energy you put into the jump gets you rising again.
It’s good that happens in the economy too. When we move closer to a free market, not only do we become more prosperous, we become more free.