Population, Urban Thinking, and the Vote

Did I ever mention that I was once a cartographer? It’s what I did as a summer job, putting myself through college. This was back before AutoCAD, so we created overlays by hand. Fun times. It’s always been kind of a family joke, because I’m not good with directions (that’s an understatement). In a city the size of Houston, flat enough not to have directional clues on the horizon, it’s helpful that we now have GPS systems wherever we go.

Anyway, I’ve always been kind of fascinated by maps. I’ve come across some recently that are for different purposes, but imply some correlation. Those red spots are urban areas. I think that's cities with over 100,000.

This next one shows that information by counties. Essentially half of the US population lives in those densest counties, including Alaska and Hawaii. The blue "half" includes 146 counties out of a total of over 3141. That's about 4.6% of counties.


This next one is the 2016 electoral map, showing vote winners by county, with more intense color indicating wider margins of the vote.

You’ll need to use your imagination to overlay all four maps. But what you see is likely this:


The maps may not show this, but people who live outside the relatively few densely populated areas think differently, on the whole, than people who live in urban areas.

It may be that people self-select. Maybe cities make people think that government control is the answer to all their needs. Or maybe people who think that gravitate toward cities, and maybe more self-reliant types live in the suburbs and rural areas.

Maybe people who are born in cities inherit the ways of thinking that surround them. And people who live outside cities think in ways the people around them think.

Maybe people in these different settings have different needs based on their surroundings. For example, if you live in a small apartment with very little storage, you can’t keep a lot in your pantry and refrigerator—and you probably don’t have a deep freeze in your garage (which you probably don't have). So you would have to shop for just a few items at a time, frequently. Or eat out a lot.

But if you have to drive half an hour to the larger grocery stores, you probably stock up once a week, have supplies on hand to make various recipes. And you probably eat at home more often than city dwellers do.

If you live in a suburban setting, you might do more shopping around, and your stocking up or eating out may have more to do with your family’s schedule than location of stores or home storage limits.

If you live in a city, public transportation is widely available, and you may be used to it. You may not even own a car, which is expensive to garage, expensive to park, and inconvenient to get around town in.

If you live in a rural area, you’re used to driving long distances for everything: food, school, entertainment, work. Having your own transportation is essential.

If you live in a suburb, your access to public transportation may be spotty. And getting where you need to go, among many directions and choices, is a lot more convenient—even essential—in your own vehicle. Plus, you can carry a lot more in a car, or maybe an SUV, than you can on a bus.

Whether it's causal or not, people in urban centers tend to think differently from people outside urban centers. And, because they're surrounded by so many people who think like them, they may think that is the only right way to think. They may not even question what they think.

If we go back 230 years, when the Founders worked out the Constitution, a main concern was that argument about population or state power. Why would a small state like Rhode Island go along with a plan that would forever give all the voice to a large state like Virginia? People in powerful, populated areas thought differently from those in smaller and/or less populated areas.

The Founders came up with a great compromise: two houses of representative government—one determined by population, the other determined by state.

The United States is not a democracy. And that’s a good thing. In a democracy, all you need is half the people plus one to want something, and that’s what you get. If half plus one decide you don’t deserve the money you earn—because of your beliefs, or your looks, or because that many people just dislike you—then they “legally” take your money. If half the people plus one decide people like you shouldn’t own property, or shouldn’t get certain educational opportunities, or some other freedom we take for granted, the mob rules, and you lose that freedom.

That's tyranny of the majority. Back then, the Founders knew better than to want mob rule democracy. Do we still know better?

After the last election, especially, there’s been a push to do away with the Electoral College, which is the representative way we actually choose our president. The Electoral College is based specifically on that compromise between power by population and power by the various states.

Here's Robert Reich insisting that, since the election didn’t go the way of the population majority, the results were wrong, and this should never be allowed to happen again, so he’s offering a plan to thwart the Electoral College without all the bother of amending the Constitution. It’s called National Popular Vote, or NPV. And it’s getting enough traction that you’d better be aware of it.

Let’s be clear. Rule by popular vote intentionally and forever disenfranchises voters everywhere but in the urban centers.

Getting rid of the Electoral College—or any other scheme that grants power based solely on population—and you get the mob rule the Founders worked hard to prevent.Tyranny of the urban centers, we could call it.

PragerU has a brief video explaining why the Electoral College is a much better idea than the popular vote, and why NPV is such a bad idea:

Here’s one more graphic* to illustrate the value of the Electoral College to everyone outside the East Coast, the West Coast, Chicago, plus a few other cities. 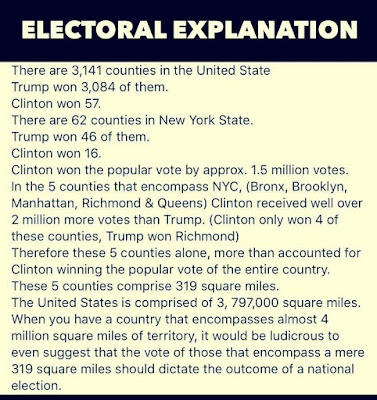 Posted by Spherical Model at 10:23 PM