French political economist Frédéric Bastiat published The Law in 1850, just months before his untimely death at age 49. The Law is a short work but packed with quotable lines. It reminds us that these truths are not new, nor were they limited to the United States. And it dispels the idea that we’re evolving into smarter humans, so we don’t need to listen to the wisdom of past generations.

This first quote lays out the proper role of government as well as anything since the Declaration of Independence:

Life, faculties, production—in other words, individuality, liberty, property—this is man. And in spite of the cunning of artful political leaders, these three gifts from God precede all human legislation, and are superior to it.
Life, liberty, and property do not exist because men have made laws. On the contrary, it was the fact that life, liberty, and property existed beforehand that caused men to make laws in the first place.

The next several relate to something I’ve been thinking about lately: the limits of government to do goodwill. Government doesn’t have a heart; it only has power. If it takes from someone to give to someone else, Bastiat identifies that as plunder:

Sometimes the law defends plunder and participates in it. Thus the beneficiaries are spared the shame and danger that their acts would otherwise involve… But how is this legal plunder to be identified? Quite simply. See if the law takes from some persons what belongs to them and gives it to the other persons to whom it doesn’t belong. See if the law benefits one citizen at the expense of another by doing what the citizen himself cannot do without committing a crime. Then abolish that law without delay—No legal plunder; this is the principle of justice, peace, order, stability, harmony and logic.

Government is the great fiction through which everybody endeavors to live
at the expense of everybody else.

Legal plunder has two roots:
One of them, as I have said before, is in human greed;
the other is in false philanthropy.
When plunder becomes a way of life for a group of men living together in society, they create for themselves in the course of time a legal system that authorizes it and a moral code that glorifies it.

The mission of law is not to oppress persons and plunder them of their property, even though the law may be acting in a philanthropic spirit. Its mission is to protect property. 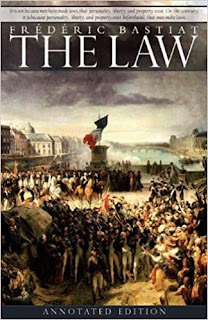 A week ago my post dealt with two competing impulses: compassion for people around the world who live less well, and the need for maintaining our borders to maintain our sovereignty. Individual stories tend to bring out our compassion. The law is intended to be just and fair, not persuaded by the most emotional story.

If you use Bastiat’s principles, you would need to ask yourself, “Am I willing to take from my neighbor at gunpoint to give to this person I think is deserving?” If you don’t see that as moral, then it cannot be moral to get your government to do it for you.

The plans differ; the planners are all alike.

If the natural tendencies of mankind are so bad that it is not safe to permit people to be free, how is it that the tendencies of these organizers are always good? Do not the legislators and their appointed agents also belong to the human race? Or do they believe that they themselves are made of a finer clay than the rest of mankind?

Bastiat mentions some sacred cows, such as public schools, which we forget were not required to educate the public until just about a century ago:

In this matter of education, the law has only two alternatives: It can permit this transaction of teaching-and-learning to operate freely and without the use of force, or it can force human wills in this matter by taking from some of them enough to pay the teachers who are appointed by government to instruct others, without charge. But in the second case, the law commits legal plunder by violating liberty and property.

Here are a few more that could come under the heading “good to be reminded of”:

As long as it is admitted that the law may be diverted from its true purpose—that it may violate property instead of protecting it--then everyone will want to participate in making the law, either to protect himself against plunder or to use it for plunder.

When law and morality contradict each other, the citizen has the cruel alternative of either losing his moral sense or losing his respect for the law.

Liberty is an acknowledgment of faith in God and His works.
Posted by Spherical Model at 10:31 PM