In part I, I covered the statewide races (except judiciary, which we’ll cover today). In part II, I covered Congressional District 2, the race to replace retiring Congressman Ted Poe. Today we handle all the rest, which is mostly judiciary.

As in the other two parts, I’ll be covering only contested races. I don’t know of any candidates unopposed in the primary who ought to be opposed.

I use a number of sources for my decisions, including endorsements and input from a friend inside the judiciary, my SREC chair, the Conservative Coalition of Harris County (CCHC), candidate websites when available, personal meetings at my Tea Party and other places, and more. I suggest you add my opinions as part of your research in your decision-making process.

I’ve added a graphic at the end to summarize all three blog posts into a single, easy-to-read list of my choices.

Sharon Keller is the incumbent, serving more than 15 years so far. There is a sense that Keller has been imperfect, but has been a solid conservative judge—which means judging according to the law, not legislating from the bench. Her opponent, David Bridges, has impressive appellate experience himself and could be good. But, without a compelling reason to oust the incumbent, I’m going with Sharon Keller. My inside-the-judiciary friend and the Conservative Coalition (CCHC) are with me here.

I have less surety on this position. Both the CCHC and my SREC chair go with Michelle Slaughter. But my judiciary friend says, “Jay Brandon has extensive experience that is better suited to the position he is seeking than either of his opponents. He has served for many years as a prosecutor, defense attorney, and appellate specialist.” I’m giving weight to the judiciary experience and going with Jay Brandon.

Terry Yates has 27+ years relevant experience. Katy Boatman has been licensed less than 10 years. I haven’t met either. But my judiciary friend and CCHC go with greater experience, and so I go with Terry Yates as well.

District courts all cover the entire county. They are assigned specific purposes. When a new court is created, it gets the next number. So the “district” and its number have nothing to do with location within the county. Many courts have been displaced since flooding from Harvey, so I offer my appreciation for the way the courts have worked long and creative hours to keep their courts functioning.

In all but a couple of cases, the contested judicial races are for seats held by Democrats, or open benches with a retiring judge. Two years ago, in a presidential election year, the Democrats, who vote straight ticket (until the law against that goes into effect in 2020) swept Harris County, winning every countywide race, which meant displacing a number of good Republican justices with inexperienced judges, some of whom willingly legislate from the bench. So it is important to vote this election to recover some of those lost seats.

This decision is evenly divided. Stacey Bond has judicial experience for this criminal court, and has worked as a prosecutor and defense attorney. She leans toward the defense. Maritza Antu has good experience as a prosecutor, but no judiciary experience. She has the badge of honor of not being retained when Soros-funded District Attorney Ogg got elected, and the defense bar doesn’t like her. It makes more sense to go with experience, although I’m tempted to go with the emotional appeal of Antu. Still may change my mind, but I’ll probably vote for Stacey Bond.

Justin Keiter gets unanimous support among my sources, with relevant experience for this court, over his opponent Charles Johnson. I’ll be voting for Justin Keiter.

I like both Alyssa Lemkuil and Melanie Flowers, and have heard them both several times at Tea Party meetings. Flowers always seems to be in a race with a stronger candidate. Eventually I hope she can become a judge. But Alyssa Lemkuil is a former Abbott appointee, and was highly rated by the attorneys who practice in her court. She’s the experience judge, so I’m voting for Alyssa Lemkuil.

There are three candidates for this court, which handles restraining orders related to domestic violence: Geric Tipsword, Angelina Gooden, and George Clevenger. I’ve heard all three in person. Angelina Gooden was recently appointed by Governor Abbott, so she’s an incumbent of only a few months. While the others would probably be adequate, I going with the Governor and my other source and vote for Angelina Gooden.

The two candidates are Dan Simons and Jay Karahan. Karahan is the incumbent and has done a good job, according to my judiciary friend. Dan Simons gets support from other sources, but he doesn’t have judicial experience. I’ve met Karahan in person a number of times. I can’t see any reason to oust a good incumbent, so I’m going to vote for Jay Karahan.

The two candidates are Lori Botello and Aaron Burdette. I met them both at the February 3rd Tea Party meeting. Aaron Burdette was particularly impressive. He’s has the better experience, and he gets the unanimous endorsement of my sources. I’m voting for Aaron Burdette.

This race has puzzled me. I wondered if I was missing some hidden information. Theresa Chang is the incumbent, with oodles of experience and high approval by the local bar. Her challenger, Erin Swanson, is just four years out of law school, and, while she claims extensive experience, that can’t be so. She’s barely eligible to run for a judge position. Why challenge an effective incumbent? I would not have taken her at all seriously, except that she is the daughter of Rep. Valoree Swanson, which is probably why she got a high percentage endorsement from CCHC. But I looked into this race long enough ago to tell Judge Theresa Chang to list me as endorsing her.

I have met Sophia Mafrige. I have not met David Tang. All my sources, and my personal impression leans toward Sophia Mafrige, so she gets my vote.

Justice of the Peace, Precinct 5, Place 2

There are three candidates: Jeff Williams, J. R. Harris, and Mike Wolfe. Williams is the incumbent, since 2010, and I’m told he’s doing a good job. Again, I’m puzzled by challengers to an effective Republican incumbent. Harris got the nod from a spare majority of CCHC, but I’m voting for Jeff Williams.

Among non-judicial countywide races on my ballot, only one is a challenger.

Paul Simpson was voted in as HCRP Chair at the same time I became a precinct chair, four years ago. This is an unpaid position, although it takes pretty much full-time work. I’ve seen training and outreach improve considerably. Funding is sound. Technology gets ever better.  Communications have been excellent.

We did lose the county in 2016. The county has always been 50/50, so it’s a matter of voter turnout, and the other party has some effective (albeit unethical) ways of making that happen when there’s an emotional election going on. I’m hoping we make some returns during this off-year election. Chris Carmona and his supporters think a change in leadership is the solution. I don’t. I’m in favor of keeping Paul Simpson.

Propositions on this ballot do not become law; they become suggested party platform planks, with more emphasis than other grassroots suggestions, because they have already made their way through grassroots support to the county party level.

I’m not 100% in favor of every idea, although I do strongly support most of them. But I’m willing to have the debate on all of them. My SREC chair and the CCHC both support a yes vote on all 11 propositions. I’m inclined to vote yes on all as well. 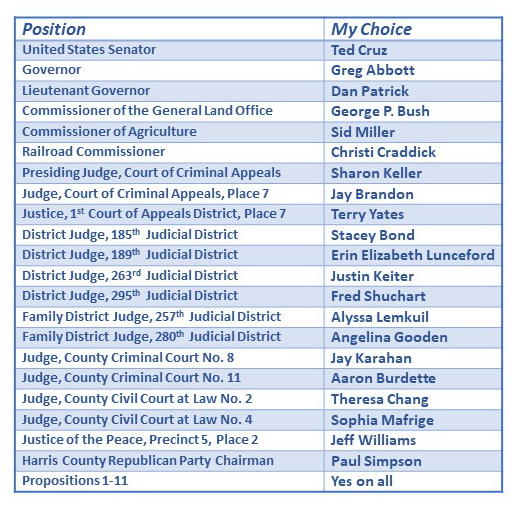 Posted by Spherical Model at 5:45 PM