There’s a lot of harm that feminism has done to men and women. I’m not saying there should be subservience, or underpaying, or arbitrary limitations. But feminism hasn’t really focused on equal opportunities and choices for women; feminism has been about insisting there is not difference between men and women, and then pressuring women to hide their femininity and behave as if they are men.

That is not freeing; that is limiting. And it is anti-woman.

There was a conversation I heard this week, an interview on British television, I believe, with Jordan Peterson, author of 12 Rules ofLife: An Antidote to Chaos. I wasn’t familiar with him, and haven’t read the book. But the conversation was enlightening. The Channel 4 woman interviewing him (her name is not mentioned, and I don’t recognize her) was aggressive, pushy, a lot of negative things—but there was, indeed, a conversation.

I'm including the video here. It's about 29 minutes long, so I'll only quote a few parts afterward.


Much of it consisted of her saying, “So, you’re saying…” and him returning, “No, I’m not saying that at all.” I tried to count. I think there are at least a dozen of those instances. Once he adds, “And I’m very very very careful about the words I use.” And another time he said, “It’s because you’re not listening,” to which she talked over him to insist she was listening carefully.

I found him to be very clear. But her misunderstandings come from an assumption that anyone who doesn’t see things the way she does must be asserting something unacceptably negative. So her purpose was mainly to catch him saying those negative things. It didn’t work. But it did demonstrate the difficulty in actually having these conversations.

There are several points he makes about the statistical differences between men and women and the choices they make. She always tried to imply that mentioning those facts was inherently sexist, and she would add on some negative assumptions. And then he would correct her.

For example, at around 6 minutes in, she brings up the 9% pay gap in the UK:

She: But I want to put to you that, here in the UK, for example—let’s take that as an example—the gender pay gap stands at just over 9%. You've got women at the BBC recently saying that the Pollcaster [?] is illegally paying them less than men to do the same job. You’ve got only seven women running the top FTSE 100 companies. So it seems to a lot of women that they’re still being dominated and excluded, to quote your words back to you.
JP: It does seem that way, but multivariate analysis of the pay gap indicate that it doesn't exist.
She: But that’s just not true, is it?
JP: It’s absolutely true.
She: 9% pay gap. That’s a gap between median hourly earnings between men and women.
JP: Yeah, but there’s multiple reasons for that. One of them is gender, but it’s not the only reason. If you’re a social scientist worth your salt, you never do a univaried analysis. Like, you say, well, women in aggregate are paid less than men. OK. Well, then we break it down by age; we break it down by occupation; we break it down by interests; we break it down by personality.
She: But you're saying basically it doesn't matter if women are getting to the top, because that's what skewing that gender pay gap, isn't it? You’re saying, well, that's just a fact…, but it doesn’t matter, because you’re never going to get to the top.
JP: No, I’m not saying it doesn’t matter either. I’m saying there are multiple reasons for it. 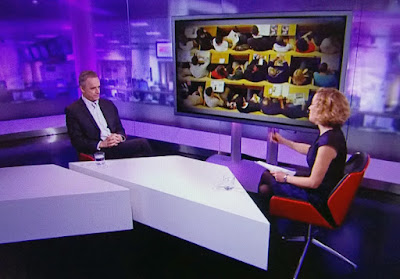 She: Is gender equality a myth?
JP: I don’t know what you mean by the question. Men and women aren’t the same, and they won’t be the same. That doesn't mean they can’t be treated fairly.
She: Is gender equality desirable?
JP: If it means equality of outcome, then almost certainly its undesirable. That's already been demonstrated in Scandinavia. Because, in Scandinavia,
She: What do you mean by that? Equality of outcome is undesirable?
JP: Well, men and women won’t sort themselves into the same categories, if you leave them alone to do it on their own accord.  We’ve already seen that in Scandinavia. 20 to 1 female nurses to male, something like that—it might not be quite that extreme—and approximately the same male engineers to female engineers. And that’s a consequence of the free choice of men and women in the societies that have gone farther than any other societies to make gender equality the purpose of the law. Those are ineradicable differences. You can eradicate them with tremendous social pressure and tyranny. But if you leave men and women to make their own choices, you will not get equal outcomes.
She: Right. So, you’re saying that anyone who believes in equality—whether you call them feminists, call them whatever you want to call them—should basically give up, because it ain’t gonna happen?
JP: Only if they’re aiming at equality of outcome.
She: So, you’re saying, give people equality of opportunity; that's fine?
JP: Not only fine; it's eminently desirable, for everyone, for individuals and for society
She: But, still, women aren’t going to make it. That’s what you’re really saying?
JP: It depends on your measurement techniques. They’re doing just fine in medicine. In fact, there are far more female physicians than there are male physicians. There are lots of disciplines that are absolutely dominated by women. Many, many disciplines. And they’re doing great.
She accuses him of not wanting women to have equal pay for equal work. He points out that the problem is complicated, because you have to ask, who decides what is equal work? There’s more. A lot of it uncomfortably argumentative. But it is revealing.

Men and women are different. They make different choices. There will therefore be different outcomes. If a woman does pretty much the same things as a man, in the same competitive business world—taking away all the different choices, and just comparing raw equal behaviors, which is more an intellectual exercise than an actual experience, you get woman who succeed. You only get more women at the top if more women choose to behave as men do.

That has always been my problem with feminism; it’s so anti-woman.

You see that as well in the recent sexual debate. The so-called sexual revolution was supposed to make it so women had the same sexual freedom as men. But that requires denying that women get pregnant from sex. It also denies that men degrade themselves with casual, commitment-free sex, and a woman only degrades herself when she follows that uncivilized male behavior.

Matt Walsh explained this  well this week. It was an uncomfortable conversation too, but needed. He was responding to the accusations against comedy actor Aziz Ansari. Walsh’s piece is titled, “You Feel Violated After Casual Sex Because You Degraded Yourself. Not Because It Was Rape.” There were parts a little too graphic for me to want to quote. But these paragraphs make the point:

So, you feel violated? Well, you were. But you allowed it to happen; you invited it; you participated in your own degradation, and you did the same to the other person, even if he does not share your regret. What you hear in your heart is your conscience telling you that your body is too sacred to be treated the way you treated it. You. You treated it that way. It wasn’t something that happened to you, it was something that happened through you, because of you. You are 100% responsible, and so is the other person.
In this way, casual sex is no different than any other sin. Whenever we do something wrong, if our conscience is still functioning, we will always look back when the deed is done and think, “Why did I do that? It wasn’t worth the cost.” And we may be tempted to retroactively relieve ourselves of our guilt by rationalizing and justifying. We may say — whether the sin is sex or anything else — that we were “pressured.” And surely we were pressured. Every sin in the history of man has been committed by someone who was pressured, whether externally or internally, to carry it out. But the fact that you were pressured into sex does not mean that you were raped, any more than the fact that you were pressured to smoke a joint in high school means that you were drugged. Moral courage is required to resist pressure and temptation. It is no one's fault but your own if you lack it.
There is one way the Hollywood “casting couch” scenario could have been prevented: If every woman who had ever been placed in that compromising situation had run, yelled for help, and made sure the men who put her in that situation were held accountable, it would never have become a thing.

I’m not saying this is the individual victims’ fault. I’m saying that it is the fault of willing females who sold their souls for a chance at fame, laying the trap for future victims. Every man who did these despicable acts is culpable, fully. And should be prosecuted and brought down. Every person, male or female, who knew about it and turned their head and gave predators a pass is culpable for their part.

But it’s not just a matter of consent. Like Matt Walsh says, even if a man doesn’t recognize why he should regret it, he degrades himself as well. Soul-degrading casual hook-up sex was never a way in which women should emulate men. But let’s not forget that, every time a man has casual sex, there’s a woman choosing to have it with him. This was true in the Ansari episode. The soul degrading consequences are severe for both, but the physical and emotional consequences are more likely to affect women, no matter what the feminists shout.

Feminists were always wrong about casual sex. And they compounded the wrongness by adding abortion, to take away the result of what the woman should only have done within a married relationship, in which the two parents would raise the child. So feminism denies womanhood, and kills babies in an attempt to cover up natural consequences.

I think it’s likely that women would be more respected in the workplace if they were still respected as women, instead of turned either into “just another man” or else the sex object of a man who never learned to respect women.
Posted by Spherical Model at 11:26 PM