In the Mind-Changing Business

I was talking with son Political Sphere the other day, about Ben Shapiro’s speech last week at Berkeley. I watched it live-streamed, and he had watched it replayed later. We had both enjoyed it. We’re Ben Shapiro fans.

The Q&A following the speech was pretty epic. You may have seen a clip of him doing a little debate with an audience member on the issue of abortion. I’ll include it here, because it may be the clearest delineation of the two sides (and the obvious morality of one over the other) that you will see in two minutes.

Ben Shapiro isn’t someone you can safely disagree with; he will win in a debate. He will have the facts in his head, and be able to lay out the argument in a logical way. And, as Political Sphere was pointing out, he never uses an emotional argument.

I am a lover of truth. Sometimes finding truth requires not only laying out the facts and arguments, but also applying conscience, which can be emotional, but is trained toward truth—unless you have practiced overriding your conscience.

When someone uses an emotional appeal—“But what about the children?” “Shouldn’t everyone be allowed to love the person they choose?” “Do you want people to die without health care?”—the emotion is typically irrelevant to the issue.

Do we care about children? Of course. It may be that we care more; we actually want them to be raised in stable families and taught to become productive, civilized adults. A policy that doesn't bring about those results doesn't qualify as actual caring.

Are we against love? Of course not. We’re not even against people committing to the person they choose. What we’re against is being forced to give some other arrangement the imprimatur that God gives to actual marriage.

Do we want people to die without healthcare? Of course not. But forcing people to buy a type of insurance they don’t want and can’t afford, and which does not meet their particular needs, is not providing actual health care. What we see as a better way of getting care to everyone is free market plus philanthropy—both of which are hindered by government interventions.

Earlier this week I listened to a Daily Wire Conversation with Ben Shapiro, a full hour of his conservative brand of fun, covering, at breakneck speed, political topics as well as music, movies, and religion. About ten minutes in, the host, Elisha Krauss, asks Shapiro about whether he intended to someday run for president. I’ve never heard him talk about any political aspirations before, and he wasn’t positive about any here either, but he didn’t rule it out. But he said something about his purpose—and the purpose of The Daily Wire, where he is editor-in-chief—that struck me:

Eisha Krauss: What would it take for you to run for president in 2020 or 2024?
Ben Shapiro: So, 2020 is not going to happen. I am old enough—like, right at the cusp. So I turn…  Let’s see, I was born in ’84. So, in 2020 I would turn 37. But the problem is that I wouldn’t want to divide the Republican Party, and whatever happens right now, President Trump is the titular leader of the Republican Party; there are a lot of people that are very loyal to him. The last thing you want to do is sink the candidate of the Republican Party in the primaries and destroy him for a general election. Or, alternatively, alienate half of the people who are big Trump supporters.
So I think it’s Trump of bust for the Republican Party in 2020.
Further down the line, yeah, we’ll see what happens. I don’t really have any intention of doing anything like that right now, but that’s because we’re focused, obviously, right now, on building the company, but in ensuring that the message gets out to the widest variety of people available.
And I’m actually not sure whether you do more good convincing people outside of government, or being in government, trying to convince people. Once you sort of have the patina of government stamped on you, I wonder how many ideas you can actually…how many minds you can change, as opposed to being in the mind-changing business, which is what we do here.
He’s in the mind-changing business. That’s very close to what I do. Maybe that’s why it struck a chord.

It’s an educational mission, changing minds. Mine is more refined as, “Let’s reframe the structure of the ideas, so we can see how they interrelate, and thereby make decisions that will lead us in the right direction—toward freedom, prosperity, and civilization.” Shapiro’s arguments fit well in my framework, but he’s doing more of the nitty-gritty details, issue-by-issue, comparing the two sides and showing clearly which side makes more sense, both morally and economically. While I try to do that too, on certain issues, I don’t tackle as many issues each and every day.

There’s a book I’ve been spending some time on—referred to it before, The Eden Conspiracy, by Joe Harless—that is education oriented, with the purpose of producing “graduates who have skills, knowledge, information, and attitudes to become accomplished citizens.” I agree with that goal, but then we have to define what an accomplished citizen is. 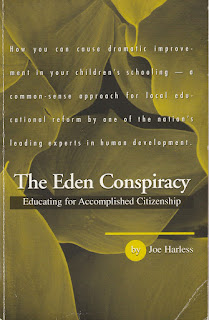 The author suggests that a society of accomplished citizens would have these characteristics [p. 47]:

·         Exists under a democratic form of government.
·         Is lawful, orderly, ethical, and safe.
·         Allows freedom for its citizens—within the law.
·         Allows freedom for enterprise—within the law.
·         Provides equal opportunity for its citizens.
·         Values the family as the basic unit of society.
·         In partnership with the family, provides protection and development of the young.
That’s not too different from how I describe civilization in the Spherical Model. But there’s some difficulty, not only in getting schools to teach these values, but even to agree on which values, and what those values mean.

Harless mentions an anecdote from his household: p. 148

This reminds me of the time our four-year-old son was going to a friend’s house. As usual, my wife admonished Be a good boy. With all sincerity he asked, Mom, what IS a good boy? I don’t recall what she then told him, but the question became our family’s response when any of us became too soft [ambiguous] in our speech.
This lack of precision in speech is part of why there is so much strife in society.

For example, can we agree that being tolerant of differences is a necessary value in a non-homogenous, free society? Yes. But what does tolerance mean? One side simultaneously screes, “Don’t shove your beliefs down my throat!” while using the force of dubious law, social shunning, economic boycotting, and even fascist violence to enforce their beliefs on those who disagree.

A non-slave should not be forced to use his artistic talents to portray a message that goes against his religion, for example. It’s not about a couple getting a cake for a gay wedding; they can get that elsewhere; forcing a particular baker to do it is the ultimate intolerance—beyond what slaveholders ever had the power to force their slaves to do.

Tolerance doesn’t mean we must believe or do all the same things; it means we ought to calmly agree to disagree.

Ben Shapiro’s speech at Berkeley is important for several reasons. One is that it became clear to anyone paying attention that his speech was not a threat; those trying to shut down his speech were a threat. Also, he spoke clearly, rationally, and calmly—even respectfully—toward those who disagreed with him. And that civilized decorum allows for an actual conversation.

If there is an actual conversation, in which terms are agreed on for common ground, then there can be mutual understanding. That may or may not lead to changing minds, but at least it gets rid of the hostile assumption that anyone who disagrees with some prevailing viewpoint is evil and must be eliminated.

If an idea is right, if it’s true, it stands up to scrutiny. If you feel so threatened by someone articulating an idea that you don’t agree with that you must resort to violence to forcibly shut down that speech, maybe your idea is weak. Maybe you’re wrong.

What I believe—what I trust about humanity—is that minds can be changed to come to see the truth. I believe that most people want to think of themselves as good and right, and so, if presented the truth clearly, without clouding emotional pressure, they will choose truth. I might be wrong. But I hope I am right.


Truth is worth seeking and finding. And it’s worth finding ways to express it so that minds—and lives—can be changed for the better.
Posted by Spherical Model at 6:33 PM