Things have meaning when we imbue them with meaning. 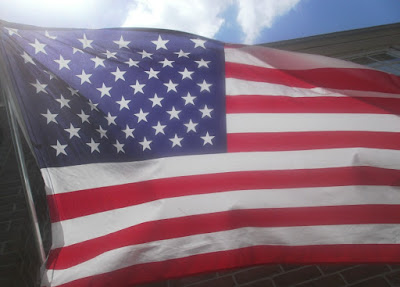 It’s useful to have a symbol that means something larger. Instead of describing, each time, that the United States of America is a nation based on a Constitution that limits government, and is intended to give people freedom while protecting their rights—kind of a mouthful—we have a symbol. A flag. It represents those larger ideas, plus some of our history.

The thirteen stripes represent the original colonies—the founding states. For a while there was an attempt to add a stripe with each new state, but that soon got unwieldy. The stars, though, do represent each state, so the number changed frequently until its current arrangement of fifty stars.

The red, white, and blue colors themselves add meaning. White stands for purity and equality. Red stands for valor, or courage. Blue stands for vigilance and justice.

Flag Day, June 14th, is actually the US flag’s birthday—which came about nearly a year after the Declaration of Independence, giving Washington's army a symbol to rally around.

When we “pledge allegiance to the flag of the United States of America,” we are using the word flag to represent all those ideas that are America. We even go on to clarify that we are also pledging allegiance to “the Republic for which is stands.” We mean all those states that make up our “one nation under God,” along with the ideas “indivisible” and “liberty and justice for all.”

Allegiance is related to the word ally, also align. When you offer your allegiance to the flag, you are allied with the ideas the flag stands for. In the case of this nation, we stand for some lofty things. The government doesn’t always meet up to that lofty standard. We love the country anyway. Like loyalty to family, we stand with, want the best for, correct as necessary; we don’t say, “You’re not perfect, so I’m abandoning you.”

You’re free to do that, of course. You can leave, become a permanent ex-patriot. But you can’t, by definition, be a patriot if you feel no allegiance to the place and those beautiful ideas the flag symbolizes.


A flag is a piece of cloth, with colors. But it’s much more, because of the meaning it carries. When we see our flag blowing in the breeze, we see it as beautiful. Aesthetically it is, but the beauty we feel is the loftier meaning it symbolizes.

We can imagine what Francis Scott Key felt, after the battle at Ft. McHenry, during the War of 1812, when the smoke cleared and he could see the colors flying. That "star-spangled banner" was beautiful because it meant that freedom won that battle against tyranny. And that is always a beautiful thing.

One other symbol got notice this week. Do you remember when President Reagan spoke the forceful words, “Mr. Gorbachev, tear down this wall”? It has been 30 years since that speech, given June 12, 1987. The wall was a physical barrier between East and West Berlin, But it was larger than that physical thing.

The larger thing was called the “Iron Curtain.” It represented the oppression of Communism, keeping millions of people trapped under Soviet communist rule. The wall was intended to keep people captive, separate from the Free World.

Two years after the speech, the day finally came when the wall was physically torn down. The meaning of that was more than just disassembling a structure; it meant renewed freedom. Families who had been separated for decades could freely visit one another again. People who had been held captive under tyranny gained visiting privileges to the rest of the world.

When I visited Washington, DC, I saw a piece of the wall, kept in a museum. It's not a pretty thing. But I'm glad we can see the symbol—that symbol we do not feel allegiance to—and remember what it meant, so that we can rejoice that the ideological barrier also fell that day.

Posted by Spherical Model at 12:37 PM