This past week, for book club, we read a biography: The Ditchdigger’s Daughters: A Black Family’s Astonishing Success Story, by Yvonne S. Thornton, MD (as told to Jo Coudert). It’s not a new book; it was first published in 1995. But it’s at least as relevant today. 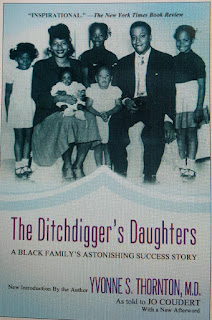 It’s an example of how a father in the home, doing his job well, makes all the difference. The five Thornton girls grew up in the 1960s, at a time when their friends were surprised to learn that their married parents lived in the home—the father hadn’t left.

Donald Thornton, whom the girls called Daddy, worked two jobs always. His wife Itasker (usually called Mommy) worked as a maid or laundress most of their growing up lives.

It was a loving and stable home. But Daddy was also blunt, as you might guess from the opening lines:

“You kids are black,” Daddy sometimes said to us. “You’re dark-skinned and ugly.”
“Daddy, don’t you love us? We wailed.
“I love you. I love you better than I love life,” he assured us. “But I’m not always gonna be around to look after you, and no man’s gonna come along and offer to take care of you because you ain’t light-skinned. That’s why you gotta be able to look after yourselves. And for that you gotta be smart.”
There’s a fair amount of frank talk about racism in the book, but never as an excuse. Daddy didn’t let them do that. Just face facts, and then do what it takes to overcome the odds.

I hadn’t realized how much racism based on skin tone existed (still does?) among blacks. Light skin is preferred, and given advantages within the culture. It was considered marrying down to marry someone more dark-skinned. But the book is never about how insurmountable racism is. Just the opposite.

To those who work so hard to inculcate a high self-esteem in children, separate from their accomplishments, Donald Thornton’s way was different. The way out of poverty was to work hard, be smart, do what it took to earn respect. He had specific goals for them: become doctors. That MD was inarguable; society had to respect you when you earned that degree.

Daddy and Mommy expected the girls to figure out how to get A’s in school. They taught them to look at someone who did well, use them as a pattern, pass them up, and then choose someone else to be a pattern.

It took some tremendous energy for the girls to travel and play in the band—The Thornettes—on weekends, and keep up with their schoolwork, plus sometimes extra jobs. They continued all the way through med school, which had to be dizzying and relentless. It also kept them busy, and out of trouble, and always aware of how much effort it took to earn advantages.

In the afterward of the edition I got (ten years after the original printing), Yvonne gives an update:

My oldest Sister, Donna (tenor sax) never celebrated her fiftieth birthday. She lost her battle with lupus in 1993 and died at age forty-eight. Although Donna chose not to graduate from college, she still recognized the value of education. Her daughter, Heather, is an alumna of the University of Virginia and the University of Pennsylvania. She is a social worker now living in San Francisco with her husband and young son.
Betty [a cousin who was adopted into the Thornton family] and her husband still reside in “The House That Donald Built” in Long Branch, New Jersey. Betty will soon be retiring after almost forty years of being a geriatric nurse.
Jeanette (electric guitar) continues to practice psychiatry in Albany, New York, in her subspecialty of Addiction Psychiatry. She has been married for over twenty-five years to her husband, Emile, a gastroenterologist. Although they have no children, Jeanette remains involved in many civic activities.
Over the past twenty-five years, Linda (drums and percussion) has since retired from the United States Army as Lieutenant Colonel. She is now one of the very few female board-certified prosthodontic oral surgeons in the country and holds a Master’s degree in Healthcare Administration. Currently, Linda is an associate professor on the faculty of Temple University School of Dentistry in Philadelphia, Pennsylvania, where she serves as the course director for removable prosthodontics.
Rita, my kid sister (piano and keyboards), has had a more circuitous route to her present career. After leaving her position as a science teacher, she enrolled in Seton Hall University School of Law and received her law degree at the age of forty. Not being satisfied in the legal profession, Rita hanged her path, entered the New Jersey Institute of Technology and, in 2006, at fifty-four years of age, became the first black woman at NJIT to receive a PhD in Environmental Science.
As for me, since 1983 (when the book ends), my life has been occupied with trying to balance my roles as a mother, wife, professor, obstetrician/gynecologist, and author. I am still married to my medical school sweetheart, Shearwood. It will soon be thirty-four years. Where does the time go?
I have been affiliated with several teaching hospitals and universities since the book was published in 1995. The academic achievement of which I am most proud is my climb to the faculty position of Professor of Obstetrics and Gynecology at Cornell University Weill Medical College in New York, and my delivery of 5,542 babies. I am presently a consultant in High-Risk Obstetrics (Perinatology).
It was an impressive goal for Donald Thornton to want all his daughters to become doctors. You set a high goal, you might reach it—and if you only get close, you’ll have accomplished more than if you set a lower goal.

One thing their Daddy told them over and over was to keep away from young men who would have no respect for their goals and their futures. It was all too easy to try to please a man, get pregnant, see him up and leave, and find yourself stuck in poverty. In a time, place, and culture where that was the common outcome, the Thorntons all managed to avoid that outcome. A determined Daddy and dedicated mother were the main reason.

In the afterward, their one more part that I think is important when you’re looking at successful career women:

My mother always told us: “No amount of success in your profession can ever make up for being a failure at home.” With that said, my greatest life accomplishment has been (with my husband) rearing two exceptional children. Our daughter Kimberly, is a graduate of Stanford University and is now completing her graduate studies in socio-medical sciences in the Master of Public Health program at Columbia University.…
Our son, Woody (Shearwood, III), is a Life Chess Master and has had a stellar career in the world of chess. He was the 1997 United States Junior Open Chess champion… and won the United States Chess Federation Scholar-Chessplayer Award before entering Harvard University. Woody graduated cum laude from Harvard and began his medical studies at Columbia University College of Physicians and Surgeons (our alma mater). When he graduated from P&S, my husband and I ascended to the stage and presented him with the diploma of Doctor of Medicine. He is currently in his residency, training to be a neurosurgeon.
One more time, the way out of poverty in America is:

1.      Don’t have sex before age 20.
2.      Don’t have sex until after marriage.
3.      Stay married.
4.      Obtain at least a high school diploma.
Donald Thornton set the sites for his daughters even higher. This was a starting point (he was actually only 18 when he married), but with drive, energy, and consistent common sense, he made it possible for them to have a much better future than a ditchdigger and a maid could normally expect.


Plus, the book is a joy to read.
Posted by Spherical Model at 2:59 PM

Email ThisBlogThis!Share to TwitterShare to FacebookShare to Pinterest
Labels: formula for avoiding poverty, The Ditchdigger's Daughters, The Thornettes, Yvonne Thornton