I’ve been re-reading a couple of classic youth novels for book club, and I’m reminded that, in order to become a classic, a piece of literature needs to touch our desire to  understand and strive for what is right, just, and civilized.

Black Beauty was published in 1877. It’s the story of a horse’s life—told from the point of view of the horse, in England when horses were necessary for most transportation. Horses are servants to humans, nothing to be done about that. But there’s so much about the way they’re treated that determines whether they can be a good servant. 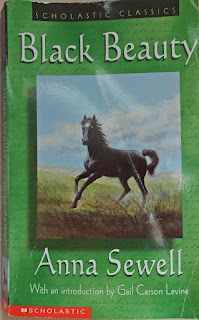 Nineteenth Century England is somewhat far off, and yet there’s some wisdom that transcends.

While Black Beauty is still at his first master Squire Gordon’s, he is cared for by a good and skilled stable master named John, and his assistant James. John has come upon a scene of a young man trying to force his pony to jump a fence that is too high. The pony keeps refusing, and eventually tips the boy into a thorn hedge. John, rather than helping the boy out, allows him to learn from the scratches, and then lets the father know what has happened—letting them stop worrying after the riderless pony has arrived home, and letting them know the pony was not at fault. The father sees the need to do some teaching with his son.

Back home, John tells the incident to James, and James remembers an incident with that boy at school. James had found the boy catching flies, pulling off their wings, and enjoying watching the resulting torture. James had whopped him, and then explained himself to the school master.

“Of course I said fair and square at once what I had done, and why; then I showed the master the poor flies, some crushed and some crawling about helpless, and I showed him the wings on the window sill. I never saw him so angry before; but as Bill was still howling and whining, like the coward that he was, he did not give him any more punishment of that kind, but set him up on a stool for the rest of the afternoon, and said that he should not go out to play for that week. Then he talked to all the boys very seriously about cruelty, and said how hard-hearted and cowardly it was to hurt the weak and the helpless; but what stuck in my mind was this: he said that cruelty was the devil’s own trade-mark, and if we saw anyone who took pleasure in cruelty we might know who he belonged to, for the devil was a murderer from the beginning, and a tormentor to the end. On the other hand, where we saw people who love their neighbors, and were kind to man and beast, we might know that was God’s mark, for ‘God is Love’” (p. 59).
I’m thinking this is much different from a likely teacher’s response today. A no tolerance policy for fighting wouldn’t even wait for an explanation; the protector against cruelty would be punished.

I have no fondness for flies and feel no compunction about using a flyswatter if they enter my home, but that’s different from inflicting torture. There are studies and statistics showing that adult predators were often cruel to animals and small creatures as children. Black Beauty is fiction. But somehow that long ago society knew animal cruelty was wrong way before the studies.

Also, today the teacher would hardly be allowed to mention the devil and God as his reasoning against cruelty.

And yet this paragraph is rather satisfying for a lover of civilization.

Later in the story, James, the assistant, moves on to a new job, and is replaced with a 14-year-old boy who needs an opportunity to learn a trade. There is an instance when Joe, the new boy, is getting along well, and is riding Black Beauty on an errand. They pass a brick field, where a man is beating his horses to pull his overladen cart out of mud. Joe calls to him to stop. He points out that the wheels are too stuck, and beating the horses won’t help them move the cart. Joe offers to help unload some of the bricks. The man—angry and drunk—tells him to mind his own business, and continues whipping the horses.

Joe goes to the house near the brickyard and finds the brickyard owner and tells him what is happening. The man thanks him. Later he has him testify to a magistrate. And young Joe does it all bravely.

When Joe gets home, John notices he is upset and has Joe tell him what happened. Then he says,

Right, Joe! You did right, my now, whether the fellow gets a summons or not. Many folks would have ridden by and said ‘twas not their business to interfere. Now, I say, that with cruelty and oppression it is everybody’s business to interfere when they see it; you did right my boy (p.88).
There are things we know about being civilized. We need people with a desire to be good. And we still have some innate understanding of what that looks like.

As we’re reminded in the Ten Commandments, we need to honor God, life, family, property, and truth. And we have additional lists like this one in I Corinthians 13, reminding us what pure love entails: being long suffering, kind, not envious, not thinking oneself above others, not unseemly (crude, inappropriate, coarse), not self-serving, slow to anger, avoiding evil thought, no joy in vice, but finding joy in truth.

And, one of my favorites, an admonition from Paul, Philippians 4:8, reminds us what to fill our minds with:

We suffered yet another savage tragedy this weekend. There can be no sympathy for the perpetrator who killed as many as fifty people in Orlando, Florida. He is dead, after a three-hour standoff. He was an Islamist terrorist.

There is something particularly savage about mass murdering and claiming it’s for your religion.

Religion is our search for how to live the best possible life. We can share our religions, but we cannot force others to believe.

Religions can and do define what behaviors qualify as good enough for belonging, for calling oneself by that religion’s name. But the power ends before coercion. Before force. Before physical punishment. The ultimate punishment a religion has a right to inflict is excommunication—removing one’s name from the membership. That is for serious wrongdoing, and usually for the unrepentant continuing wrongdoer.

No religion has authority to physically punish its members. And no religion has a right to condemn and mete out punishment on nonbelievers. A so-called religion that condones these things is a usurper of political authority masquerading as a religion.

I suspect there’s a lot I do not want in my lifestyle that the victims this weekend chose for theirs. It was a gay bar; I don’t drink alcohol, and I don’t have sex outside of marriage. I’m like a lot of religious people.

But the idea that anyone would murder them is abhorrent. Murder is far deeper into savagery than anything those victims might have been doing. That should be so obvious that everyone who can be comfortable living in civilization must see this truth.

There is nothing civilized about terrorism. There is no excuse for it. It is a delight in cruelty and killing that most of us can hardly imagine—even though in this country we’ve now faced 86 terrorist incidents since 9/11/2001. Almost without exception, the terrorist plots we face are Islamist. Their behavior has the mark of the devil, who is “a murderer from the beginning, and a tormentor to the end.” They lack “God’s mark, for ‘God is Love.’”

Terrorism can’t be condoned, given excuse, or tolerated. It needs to be prosecuted, prevented, and wiped out. Every tool at our disposal should be used, especially common sense.

If someone is Muslim, I’m afraid they will continue to be burdened with the necessity of proclaiming their difference from radicals who condone terrorism. We civilized people will continue to honor them and embrace them as they do so. But it is unfortunately true that the terrorists trying to murder us do it in the name of Islam.

The failure of this administration to acknowledge this basic fact is hurting all of us—including the peaceful Muslims.

Armed security at that gun-free nightclub might have helped. And people were prevented by law from arming themselves at many of the terrorist tragedies worldwide.