One of my earliest and most frequently read posts is Leaders vs. Power Mongers. A leader serves, with a love for the people and their united purpose. A power monger seeks power for its sake, for the personal desire for power, for the purpose of wielding it.

I was thinking about this while reading some books recently. I’ve just finished the first two books in Brandon Sanderson’s The Reckoners series: Steelheart and Firefight. In this dystopian world, something appeared in the sky—a bright star?—that no one understands. They call it Calamity. Shortly afterward, a number of humans began to change. They became superhumans in a variety of physics-defying ways. Each one seems to have particular abilities and not-so-obvious weaknesses. They are called Epics. 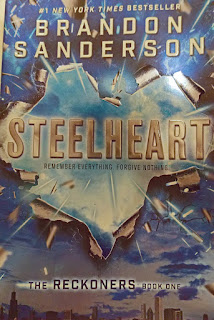 They aren’t superheroes; they are overlords, villains, and often killers. And they have reigned in terror for more than a decade as the story gets underway.

In the first book, an Epic called Steelheart takes over Newcago (the former city of Chicago). He can turn anything nonliving into steel, which he does with abandon. He does, however, allow most humans to live—if you can call it that—in the remains of the city. And he provides (through another Epic) electricity, and communications—which he uses to monitor everyone.

Our protagonist, David Charleston, is a young man who saw his father killed by Steelheart some ten years earlier. And he has spent his life since then gathering information about Epics, and particularly Steelheart, in an effort for revenge. He joins up with a group of rebels, who have been assassinating minor Epics, to help save humans in their small way. They are called the Reckoners. David joins up with them, and shares with them the sizable stack of data he has accumulated. And he persuades them to go after the high Epics, like Steelheart, which is a difficult and scary goal.

Unlike many dystopian youth novels, the protagonist in this one is very funny, which allows the series to be more entertaining and lighthearted than the circumstances in the story ought to allow. One of his quirks (he has many) is that he tries to explain things with metaphors—and he’s really bad at it. This is an ongoing joke that comes up every few pages for two full books so far.

Example: David is attracted to one of the other Reckoners, an unusual, beautiful weapons expert named Megan, who sometimes finds him amusing and other times annoying. This is in the second book (p. 173):

I needed to say something. Something romantic! Something to sweep her off her feet.
“You’re like a potato!” I shouted after her. “In a minefield.”
She froze in place. Then she spun on me, her face lit by a half-grown fruit. [The fruit weirdly glowed in this city, and was a light source.] “A potato,” she said flatly. “That’s the best you can do? Seriously?”
“It makes sense,” I said. “Listen. You’re strolling through a minefield, worried about getting blown up. And then you step on something, and you think ‘I’m dead.’ But it’s just a potato. And you’re so relieved to find something so wonderful when you expected something so awful. That’s what you are. To me.”
“A potato.”
“Sure. French fries? Mashed potatoes? Who doesn’t like potatoes?”
“Plenty of people. Why can’t I be something sweet, like a cake?”
“Because cake wouldn’t grow in a minefield. Obviously.”
Anyway, his quirks make the series quite a lot of fun.

The main thing going on in the first book is revenge, but that isn’t the overarching theme. By the end of the first book, and throughout the second, the idea has much more to do with choosing whether to wield power or resist the urge to wield it.

It turns out that one of the Reckoners is actually an Epic, but he tries not to use his powers unless absolutely necessary. Because using power changes the Epics. They become irritable, surly, and careless of human life.

In the second book, there is a point where this Reckoner gives in and uses his powers to rescue several dozen people from a burning building. Afterward, he tells David he has to go away for a while to recover. As he explains it, “It’s going to take every bit of my willpower over the next few minutes not to murder these people for inconveniencing me.”

David becomes more and more convinced that, if they could persuade Epics not to use their powers, the Epics would return to their real personalities and become reasonable and decent—especially if that’s how they were before they were made Epics.

In the second book, they are in the water-filled city of Babilar, which used to be New York. A water-controlling Epic, calling herself Regalia, runs the place. She knows about the Reckoners. And she tries to recruit David to her side. She has him out on the water, and summons Calamity—the inexplicable light in the sky that is still mysterious—to turn David into an Epic:

Was I now an Epic?
Yes. I felt it was true. What had just happened between me and Calamity was no trick. But still, I had to test it. I had to know for absolute certain.
And then I would kill myself, quickly, before the desires consumed me.
I reached out to touch the water.
I felt something.
Well, I felt the water, of course. I mean something else. Something inside of me. A stirring….
Take it, a voice said in my head. A quiet, distant voice, but a real one. Take this power. It is yours.
I…
Take it!
“No.”
The tingling vanished.
I blinked at the waters. Calamity’s light had retreated, and everything looked normal again.
I stumbled to my feet and turned to face Regalia.
She smiled. “Ah, it takes hold!”
“Nah,” I said. “I’m a washing machine at a gun show.”
She blinked, looking totally befuddled. “…What did you just say?”
“Washing machine?” I said. “Gun show? You know. Washing machines don’t use guns, right? No fingers. So if they’re at a gun show, there’s nothing they’d want to buy. Anyway, I’m good here. Not interested.”
“Not…interested. It doesn’t matter if you’re interested or not! You don’t get a choice.”
“Made one anyway,” I said. “Thanks, though. Nice of you to think of me.”
Apparently there is a choice about whether to accept power and wield it.

Later in the story, the dilemma is heightened. I hate to give spoilers, but let’s just say that giving in to power out of fear leads to the evildoing, but when love is a stronger motivator than fear, the real person isn’t overtaken by the evil side of wielding power. The person can wield power without self-corruption, and do good.

I’m wondering if that is applicable in our world. If we could get the powerful to stop wielding their power—to stop irritably disregarding the lives of individual humans around them—and keep strictly within the bounds of the proper role of government, then they would stop corrupting themselves and come back to helping society.

And if we could—at every level—find those leaders who love the people, and love to serve, and take on power only for that purpose, then we could work our way back out of tyranny, poverty, and savagery, and recover freedom, prosperity, and civilization.
Posted by Spherical Model at 6:54 PM