Along with the rest of the country, I’ve been trying to make some sense of the senseless terrorist murders in Orlando.

I am working on a theory that this—and a number of other challenges to civilization—are related to a misguided search for meaning.

Going back in history, for a moment, this is from The Looming Tower, by Lawrence Wright, concerning the Six-Day War in Israel: 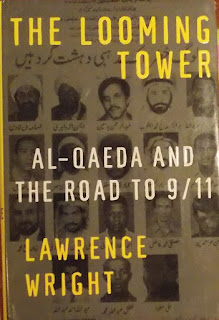 After years of rhetorical attacks on Israel, Nasser demanded the removal of UN peacekeepers in the Sinai and then blockaded the Strait of Tiran to Israeli shipping. Israel responded with an overwhelming preemptive attack that destroyed the entire Egyptian air force within two hours. When Jordan, Iraq, and Syria joined the war against Israel, their air forces were also wiped out that same afternoon. In the next few days Israel captured all of the Sinai, Jerusalem, the West Bank, and the Golan Heights, while crushing the forces of the frontline Arab states. It was a psychological turning point in the history of the modern Middle East. The speed and decisiveness of the Israeli victory in the Six Day War humiliated many Muslims who had believed until then that God favored their cause. They had lost not only their armies and their territories but also faith in their leaders, in their countries, and in themselves. The profound appeal of Islamic fundamentalism in Egypt and elsewhere was born in this shocking debacle. A newly strident voice was heard in the mosques; the voice said that they had been defeated by a force far larger than the tiny country of Israel. God had turned against the Muslim. The only way back to Him was to return to the pure religion. The voice answered despair with a simple formulation: Islam is the solution.
There was in this equation the tacit understanding that God sided with the Jews. Until the end of World War II, there was little precedent in Islam for the anti-Semitism that was now warping the politics and society of the region Jews had lived safely—although submissively—under Muslim rule for 1,200 years, enjoying full religious freedom; but in the 1930s, Nazi propaganda on Arabic-language shortwave radio, coupled with slanders by Christian missionaries in the region, infected the area with this ancient Western prejudice. After the war Cairo became a sanctuary for Nazis, who advised the military and the government. The rise of the Islamist movement coincided with the decline of fascism, but they overlapped in Egypt, and the germ passed into a new carrier (p. 38).
So, there was a loss, among Muslims in these Middle Eastern countries, of the sense that they were right, or possibly better than their neighbors as they had supposed. The way they saw it, God no longer favored them. So it was up to them to get back in God’s graces—by doubling down on being more of what they had been.

Fascism is an idea of coercion. It is extreme. They see a need to be extreme in order to assert their superiority. As with the Nazis before them, the fascist Muslims asserted their superiority through coercion, force, and death to the unbelieving or the different.

I wrote some months ago, after the Paris and San Bernardino attacks, about the siege in Mecca. The perpetrators of that terrorist attack were executed. During that one-month window between the end of the siege and the executions, the Soviets attacked Afghanistan.

It was a mythos that got Osama bin Laden. He had a teacher at King Abdul Aziz University in Jeddah, a Palestinian named Sheikh Abdullah Azzam. According to Wright, Azzam

embodied in a modern fashion the warrior priest—a figure that was as well established in Islamic tradition as the samurai in Japan. Azzam combined piety and learning with a serene and bloody intransigence. His slogan was “Jihad and the rifle alone; no negotiations, no conferences, no dialogues” (p. 95).
Azzam started traveling to Peshawar to help in the Afghan resistance. His descriptions were a recruiting tool, catching the imagination of bin Laden. As Wright explains,

The Afghans, in his tableau, represented humanity in a pristine state—a righteous, pious, pre-industrial people—struggling against the brutal, soulless, mechanized force of modernity….
The struggle of Islam, as Qutb had framed it, and as Azzam deeply believed, was against jahiliyya—the world of unbelief that had existed before Islam, which was still corrupting and undermining the faithful with the lures of materialism, secularism and sexual equality. Here in this primitive land, so stunted by poverty and illiteracy and patriarchal tribal codes, the heroic and seemingly doomed Afghan jihad against the Soviet colossus had the elements of an epochal moment in history. In the skillful hands of Sheikh Abdullah Azzam, the legend of the Afghan holy warriors would be packaged and sold all over the world (p. 96).
So bin Laden was captured by that mythos and used it to recruit throughout his deadly career. It appealed to others like him—the wealthy and educated,

According to research by Saad Eddin Ibrahim, a sociologist in Cairo, most of the Islamists who had attacked the mosque in Mecca were young men from villages who had come to the city for schooling. The majority were the sons of middle-level government bureaucrats. They were ambitious and tended to be drawn to the fields of science and engineering, which accept only the most qualified students. They were not the alienated, marginalized youth that a sociologist might have expected. Instead, Ibrahim wrote, they were “model young Egyptians. If they were not typical, it was because they were significantly above the average in their generation.” (p. 58) This type continued in recruiting of Saudis to Afghanistan.

It was never about recruiting the disenfranchised, the poor, the oppressed striking out at an unfair world. It appealed to privileged college students, wealthy sons, the comfortable—who lacked purpose, principles, and a sense of meaning. The mythos described for them led them to go fight in far off Afghanistan—at least during a school break. Maybe longer if they got the thrill they sought.

Afghan fighters, the mujahideen, tolerated the Saudis such as bin Laden, but only barely. They were untrained, undisciplined, unworthy of trust in times of war. Bin Laden spent the first several years with a “fear of bodily participation,” (p. 100). Later, ashamed, he pushed for greater Saudi participation in Afghanistan. Bin Laden was often ill, and militarily unwise. But he eventually maintained a training camp in a strategically located mountain overlook called the Lion’s Den.

There was a single battle, near the end, in which this ragtag group prevailed, almost accidentally, at a critical time. It followed their worst defeat, a three-week siege, at the end of which bin Laden ordered the destruction of the camp so the Soviets had nothing to pillage.

The Saudi group hid within the forest and attacked one-by-one any Soviets that approached. Sometime during this assault, bin Laden fainted (claimed he was calm enough to fall asleep). It was confusion within the dense forest that led the remaining Soviets to overestimate the number of the enemy and give up the attack. As Lawrence Wright describes it,

From the Soviet perspective, the battle of the Lion’s Den was a small moment in the tactical retreat from Afghanistan. In the heightened religious atmosphere among the men following bin Laden, however, there was a dizzying sense that they were living in a supernatural world, in which reality knelt before faith. For them, the encounter at the Lion’s Den became the foundation of the myth that they defeated the superpower. Within a few years the entire Soviet empire fell to pieces—dead of the wound the Muslims inflicted in Afghanistan, the jihadis believed. By then they had created the vanguard that was to carry the battle forward. Al-Qaeda was conceived in the marriage of these assumptions: Faith is stronger than weapons or nations, and the ticket to enter the sacred zone where such miracles occur is the willingness to die (p. 120).
Bin Laden was presented a rifle taken off one of the killed Soviets, which he brandished thereafter. He had neither shot the rifle nor killed the Soviet. But that didn’t matter; it looked good for building the mythos.

This is only a quarter of the way into Wright’s book. There’s much more to the story on the way to 9/11. But I think this beginning gives us some clues. Islamist extremists are people who:

·         Seek something to give meaning to their lives.
·         Reinterpret what they see in the world to suit their version of reality.
·         Define an extreme version of belief as “good” and all else as “evil.”
·         Believe they are superior and dehumanize anyone not among them.
·         Tolerate no belief outside their orthodoxy.
·         Seek power over anyone not associated with them in full, or annihilation of any who cannot be coerced to submit.
·         Believe that whatever they do is justified.
·         Delight in hating all who believe differently.
I do not think it is a bad thing to seek meaning in our lives; I think we should all do that.
But seeking meaning only in the southern hemisphere of the Spherical Model—below civilization—leads only to savagery.

And coercion will never be the right way to persuade others to find shared meaning. Real conversion comes only by invitation, “by persuasion, by long-suffering, by gentleness and meekness, and by love unfeigned, by kindness, and pure knowledge, which shall greatly enlarge the soul without hypocrisy, and without guile.”[i]

It is undeniable that Islamist terrorists are the most dangerous of the savagery-loving meaning seekers today. And we should do all in our power to identify and defeat this enemy-of-all-that-is-good.

But they are not the only savagery-loving meaning seekers. I’m seeing connections I hadn’t seen before, which may explain in part why our president fails to identify the enemy, let alone protect us by defeating that enemy. I’ll talk that about in Part II.