About That Wrong Abortion Ruling

Today’s title is vague. Which wrong ruling? There have been so many. Roe v. Wade, to begin with. Even this week there have been a couple. One was negating Indiana’s law against abortion based on possible fetal abnormalities. A US District Court judge decided the state has no interest in preserving those lives, and a woman has a right to kill an imperfect unborn child—or any other at her whim.

But, no, I’m going back to Monday’s ruling in Whole Woman’s Health v. Hellerstedt, about HB2, Texas’s 2013 abortion law. I wrote about it in more detail here and here. But let’s do a quick review.

There were separate portions of the bill, and the portion prohibiting abortion after 20 weeks—the point at which science has shown the fetus can feel pain—was upheld. Most European countries and many other states have similar limitations. Originally that was the loudest complaint, with Texas state representative Wendy Davis, in pink tennis shoes, and other pro-baby killers hysterically claiming the bill would cause women to resort to coat hanger back-alley abortions all over Texas.

The part of the bill recently ruled on was about the health of the mother. It was a reaction to the Gosnell case, in which an abortion clinic was filthy, grisly, and engaged in late-term and post-birth abortions (i.e., murder of newborns). There were two basic requirements to make sure Gosnell-like conditions wouldn’t risk the lives of the women receiving abortions. One was that clinics would be required to have doctors with admitting privileges at a relatively nearby hospital (the miles were far enough to offer flexibility in all cases). The other was that the facilities would have to meet the same standards as other ambulatory surgical centers.

So let’s be clear: the abortion industry fought all the way to the Supreme Court to avoid securing basic health care for women.

One more detail: Texas move in and close down any abortion clinics; clinics closed because they didn’t want to meet the standards—mainly based on not wanting to spend money to upgrade.

Sometimes that had to do with hiring a bona fide doctor with admitting privileges. Sometimes it was cleanliness, equipment, and other basics that they didn’t want to spend their profits on. Larger clinics, such as Planned Parenthood, were not affected at all. Also, very small clinics, such as an OB-GYN office that performed only a few (I think 15 or fewer per year) were not affected. Only actual clinics that were not willing to meet the standards had to close.

The state gave them extended time to meet the requirements. The clinics that closed did so because they didn’t want health care concerns to interfere with their bottom line—money for baby killing.

I do not write about this the way the news media writes about it. This piece in the Washington Examiner, specifically about how the Court changes abortion law back and forth, manages to be aware of the pro-life viewpoint, which I appreciate. But, this front-page story in Wednesday’s Houston Chronicle is typical opinion-pretending-to-be-journalism we’re so often stuck with: 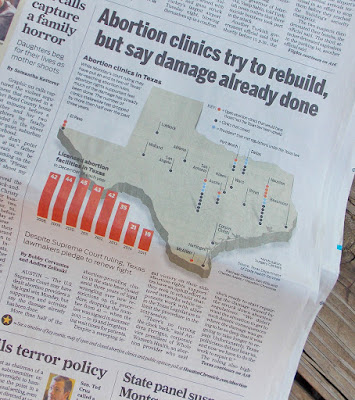 Notice the slant. This is not a neutral news piece. Maybe we should do some translating. It ought to read something more like this: “Despite the Supreme Court’s ruling against Texas’s right to protect women’s health care, many abortion clinics not meeting standards closed while the law was in effect.” The same graphic applies.

Following a mainly factual paragraph indicating that only 19 of 41 clinics remain open since the 2013 law went into effect, here’s one of the early paragraphs in the piece:

Despite a sweeping legal victory on their side, abortion-rights supporters have an uphill effort as they seek to rebuild shattered networks while opponents work with allies in the Texas Legislature to limit the procedure in the 2017 session.
Taking out the pro-abortion slant, it might read more like this:

Despite the SCOTUS ruling along liberal lines, preventing states from protecting women’s health when regulations could potentially make getting abortions less convenient, the pro-life side can be pleased that the 21 clinics that chose to close while the law was in effect will not likely reopen anytime soon.
Then following quotes would not come from the supposedly downtrodden and victimized (and ironically named) Whole Woman’s Health abortion provider; quotes would come from, possibly, Lieutenant Governor Dan Patrick, who worked for the bill—against Wendy Davis three summers ago.

And the story would certainly not go on to claim that the evil Republicans in the Texas Legislature are ignoring the litigious Democrats and their so-called experts, wasting taxpayer money by not agreeing with minority Democrats on all issues. Instead there might be some rejoicing. There wouldn’t be anything in this abortion story on the state’s voter ID law, for example, which takes up a good third of the piece.

When there are facts, there might be reason to rejoice: “The most recent data available show that the number of abortions in Texas dropped 14 percent—from 63,168 in 2013, to 54,191 in 2014—the first full-year after the law took effect.”

And then we could look at what the legislature is likely to do in the 2017 session—without the scolding and foreboding. The legislature is likely to outlaw dismemberment procedures; this has been done successfully in other states. Not only does this consider pain to the unborn, it is for safety—because dismemberment can lead to perforations of the mother.

We could say that, while the courts prevent the states from eliminating murder of the unborn—or at least limiting them to the extreme cases related to rape and incest (pregnancy without consent of the mother) or risk to life of the mother (which is usually a risk to the life of the baby as well)—then states will need to settle for working toward making them safe and rare.
Posted by Spherical Model at 7:12 PM