Review of the Proper Role of Government

This is a public service message for several presidential candidates, their supporters, and anyone else who may have forgotten (or never learned) the answer to this question: What is the proper role of government?

Choose the best answer. The proper role of government is:

A: to redistribute wealth, provide jobs, and control wages.
B: to protect the environment, end racism, and enforce agreement with prevailing opinions.
C: to offer security, education, and health care.
D: to protect life, liberty, and property.
Clue: the answer is in the Declaration of Independence.

WE hold these Truths to be self-evident, that all Men are created equal, that they are endowed by their Creator with certain unalienable Rights, that among these are Life, Liberty, and the Pursuit of Happiness—That to secure these Rights, Governments are instituted among Men, deriving their just Powers from the Consent of the Governed.
What does “Pursuit of Happiness” mean? because that’s the single difference from answer D. It means “property,” but more; it includes choosing how to pursue wealth—what job or profession you will choose—and it includes other pursuits that may or may not lead to gaining property, but are ways you choose to spend your life. Property is, after all, the things you accumulate by living your life in a way that exceeds subsistence. So “property” is shorthand for “how you live your life and pursue happiness,” but since “pursuit of happiness” is less concrete, for our purposes we can refer to property and be close enough.

If we turn to the Preamble of the Constitution, we can see how life, liberty, and property are applied:

We the People of the United States, in Order to form a more perfect Union, establish Justice, insure domestic Tranquility, provide for the common defence, promote the general Welfare, and secure the Blessings of Liberty to ourselves and our Posterity, do ordain and establish this Constitution for the United States of America.
Protecting life, liberty, and property, then, require some security things, like common defense from external forces, peace among the states (domestic Tranquility), and a justice system for lawbreakers and settling disputes, plus “general Welfare” good practices like standardized weights and measures, and maintaining the value of money, and arguably interstate roads and bridges. 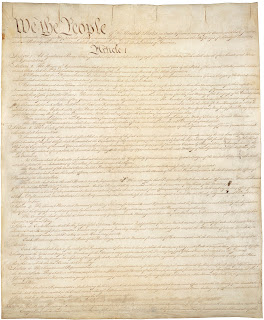 All of these things are designed to “secure the Blessings of Liberty.”

There are some more specifics within the body of the Constitution—enumerated powers. That doesn’t mean just numbered (although they are), but named, or specified. Nothing is enumerated there that isn’t designed to protect life, liberty, and property. And then comes the Bill of Rights, which spell out things that government absolutely can’t do, just in case someone comes along in a generation beyond the founders that doesn’t understand the “self-evident” truths.

There’s another truth about the role of government:

Whenever government goes beyond its proper role, there will be unintended negative consequences—and they are likely to be exactly opposite of the stated purpose of the government action.

This can be true not only in the United States, but anywhere in the world where the rules are followed: