A Platform to Stand On

One of the things we did at our precinct conventions on March 1st (primary voting day here in Texas) was to put forth resolutions for our state party platform. That’s where the grassroots get to speak.

I’m getting a first-hand view right now of the platform writing process. I got an invitation last Thursday to be part of the temporary platform committee for my state senatorial district—which meets in convention next Saturday. 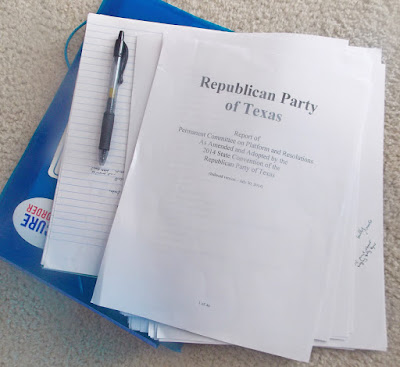 I very much appreciate this opportunity. This is something I’ve wanted to do for a long time. About 25 years ago I was at a county convention, in another state, and offered to help on the next platform—because I’m a writer and editor and thought I might be useful. What I didn’t know was that it is considered an influential position to be able to help write the platform—because you have control of the ideas. So, needless to say, my offer wasn’t accepted.

So here we are in Texas, and I started attending conventions as a delegate in 2004. I have always been both interested and frustrated at the platform process. At district and state conventions, discussions with the entire body can be tedious and painful—and time-consuming when everyone is tired after the other business. Usually we get through only a few details, and then everyone is just willing to pass the remainder as written so they can go home.

So the input actually happens before the meeting.

Eventually I learned that, to be a committee member (on just about any party committee), you need to be a precinct chair. So that was one of my reasons for running to be precinct chair two years ago. I don’t recall mentioning my interest in writing the platform to anyone; I may have, probably did. But this is the first opportunity (first primary season) since my election. And the invitation came out of the blue. Our district committeewoman knows me, and knows I am a writer, and recommended me to our district committeeman, who is chairing the temporary platform committee.

The committee is temporary prior to the convention. Temporary prior to permanent is a standard procedure. For example, as a precinct chair I made myself the temporary chair of the precinct convention, to get the meeting started. Then I was voted on by the attendees to be the permanent chair to run the remainder of the precinct convention (about an hour, plus duties afterward). It isn’t automatic, if others want to run the meeting. But it’s rare that the temporary chair isn’t made the permanent chair.

At that meeting, delegates are able to propose additional resolutions, and we will hear testimony on those, and incorporate them as needed, and then present our proposed platform.

In the meantime, we volunteer temporary platform committee members are doing the preparation work.

On Friday I got access to the platform resolutions submitted by all the various precincts in the county. Not every precinct held a convention (lack of interest?), and not every convention came up with resolutions. But there are several hundred precincts that submitted resolutions, from one to forty-four. Three to ten was pretty normal.

We are reading every single one. I started going through them Friday evening. Then Saturday afternoon we met for about 2 ½ hours to work together on understanding them, seeing whether they are significantly different from the existing platform from 2014, which is a starting point, and judging whether the concept is coming up enough that it might be considered to represent the feelings of the party.

One thing we found was that there are many repetitions. There are citizen groups that write resolutions and send them out to followers, asking them to propose them at their precinct conventions. There were a couple of very common lists, one of about 11 resolutions, and the other around 18. So once we’ve read those, we recognize them when they come up again. One of our volunteers has been setting up a spreadsheet of resolutions, so in our next meeting (tonight) we’ll be able to quickly make decisions on those repeated resolutions.

I’m nearly through with my reading—the homework preparation. The discussion goes a lot more smoothly if we’ve read through the resolutions ahead of time. I also learned that it’s helpful to identify which part of the 2014 platform a resolution relates to, so I’m trying to do that now. Sometimes we find it simple to address a new idea just by adding a phrase or bullet point to the existing platform.

Any changes we make will be in the direction of specifying details that have come up in the past couple of years, things that already fit into our conservative world view.

There are attempts at various things that aren’t going to get through, but there are a number of things that seem to be useful additions.

I personally like the idea of a shorter platform. We have a very succinct and valuable statement of principles on the first page. I’d like to call that The Platform—that is something the party in general can stand on. Then I’d like to see additional pages—maybe 10, much fewer than the current 40 or so—that are issues of concern to Republicans. These function to indicate policies we want to see go through state and federal legislatures.

I don’t know whether this drastic change can happen. Nor do I have enough clout to make it happen. But I would like to see a manageable size, so that the platform can be more useful to candidates and grassroots supporters. When I look at the current 2014 platform, I like a lot of it—most of it. But I think there may be too much explanation (a full page of long paragraphs on immigration, followed by several singular related issues, for example). It’s not that the wording is bad; it’s that the length of it makes it less useful.

I’m finding that, as we address things now, we almost always add a phrase, rather than remove something. That can’t go on forever. At some point, it’s just too long to be useful. So, shortening the platform is my dream, for some point.

I’m told that the state legislators actually do read our platform, and use it as a basis for what they work on in the upcoming legislative session. As long as elected officials are making use of the entire platform, I’m willing to live with the length.

I’m appreciating this opportunity to contribute. But I also want the grassroots to know—we are indeed reading every idea and considering it, and considering how well it fits into the conservative ideas that represent the Republican Party of Texas. What you do actually makes a difference.
Posted by Spherical Model at 2:08 PM