I stayed up and watched the Republican presidential debate Thursday night. We’re only a couple more weeks away from the first primary (Iowa, followed by New Hampshire). Texas early voting starts in a month, and our primary day is March 1st. So it may be time to settle down and make an endorsement. 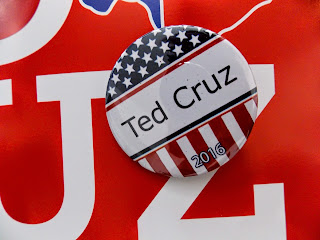 I’m for Ted Cruz. I’ve been for Ted Cruz since more than a year before he announced his campaign. I voted for him in the straw poll at the 2014 state GOP convention, and picked up a button, just in case. And the promises he has kept as our senator from Texas have kept me in his camp.

So the debates are of interest to me, not to convince me who to vote for, but for me to see what is being said, and what the other candidates are like. (Transcript available here.)

I have also been strongly against Donald Trump since he announced. I think he is an embarrassment to conservatives—because he isn’t one. And he isn’t much of an improvement over the other narcissist authoritarian/dictator/tyrant we’ve been suffering from for the past seven years—the candidate Trump voted for, back just a few years ago. I’m guessing he also voted for Hillary as senator from New York, since that happened during the time he was still calling himself a Democrat.

So, you can expect my view of the debate to be colored by my feelings. However, because I know that, I’m trying to avoid knee-jerk reactions and get a more accurate view of what’s really happening.

What I witnessed was apparently not the same debate the commentators were watching. Immediately afterward they couldn’t say strongly enough how they thought Trump had been brilliant and was the clear winner. That is exactly the opposite of what I saw happen.

Before I talk about Trump and Cruz, let me mention the others—all of whom appeared reasonable and appealing. In another year, any of them might seem quite electable. Maybe even John Kasich, who hasn’t ever been impressive but is, as last night, well-spoken and competent sounding. And while Jeb Bush is on my list of absolutely not getting my vote—because his view on Common Core reveals he doesn’t understand the Constitutional limits of government, nor government’s basic limited role—he also appears reasonable and conservative.

I am a Christie fan. I find him entertaining and appealing. When he says conservative things, he says them with color and clarity that delight me. I feel confident in his economic conservatism, his grasp of foreign affairs, and his willingness to stand up against the tremendous liberal push in his own state of New Jersey. However, on social issues I have my doubts. So I would rather look at him somewhere in the future.

I also like Marco Rubio. People keep talking about him as the youthful optimist, which I find puzzling. He is youthful. But he counters that by sounding very serious—always. He’s clear. He’s articulate. He gives you the sense that he understands the issues clearly and can explain and persuade with some ease. The main drawback is his Gang of 8 participation in an attempt to do “comprehensive” immigration reform, which is translated as “path to citizenship for illegal aliens.”

There is, of course, a need for real comprehensive reform—an easier, fairer process. Something much less Vogon-like. But that can’t be accomplished until the borders are secure. Those of us with some experience recognize that the federal government cannot be trusted on this. They have had funding provided for a border fence, and they failed to use the money and build it. This administration has gone out of its way to allow in illegals and possible terrorists pretending to by refugees—without an appropriate vetting—while keep the process as painful as ever for law-abiding potential immigrants.

I’m guessing Rubio learned that truth the hard way. I’m willing to forgive him for that one thing, pending future evidence that he now knows better.

However, his attacks on Ted Cruz are losing me. This may be some acceptable part of campaigning. I can roll my eyes and ignore it from some PAC. But right there before our eyes, coming from Rubio himself, it was unseemly. And untrue. Attempts to characterize Cruz as inconsistent and dishonest are going to fail, because Cruz is about the most consistent elected official any of us have ever encountered. Plus, his specialty is the law, particularly the Constitution, which is the basis of our law. He’s scrupulously law-abiding. If your campaign depends on painting Cruz as something other than he is, maybe you need to be self-aware enough to realize you don’t measure up.

That said, if the nominee were Rubio, while he wouldn’t be my first choice, I believe I could support him. He would take us in the right direction.

Now, about the two main characters.

Trump appeared petty, vindictive, proud, and uninformed. As usual. The target this time was clearly Ted Cruz. The particular attack that Trump trumped up (pun intended) was the birther issue. It came ahead of the debate, so Cruz was ready for it.

Do you really think one of the best Constitutional scholars ever to run for president would not know whether or not he is a natural-born citizen? He is, of course. He was born to a native American mother; his father was a refugee from Cuba who was not planning to return to Cuba. While Canada may be one country that would allow Cruz to consider himself to be a native Canadian, if he had stayed there from birth onward—unlike most countries—he was his mother’s son, an American.

When they moved back to the US, when Cruz was still a preschooler, there was no need to apply for naturalization; he was already a US citizen. To assume that his parents could return to the US with him, where he would live the rest of his life, and raise him as a Canadian instead of an American is absurd. As the law in practice has said repeatedly. Words with the nat root refer to birth: nature, native, nativity, natal. He was born a native American citizen, not naturalized (made native through a legal process) later.

What had changed was the threat in the polls from Cruz. Trump insisted temporarily that his only thought was the Republican party, because there will be a legal challenge to Cruz’s eligibility. But eventually he admitted that he brings it up now, because Cruz is doing better.

In other words, he lied about it not being an issue in September because he didn’t think Cruz was important enough. Or he’s lying about it now, because Cruz is a threat.

The exchange was highly entertaining. Cruz verified that the main Trump’s legal expert was a far-left partisan—so no wonder Hillary, et al., are jumping on with Trump’s claim. Some of the experts twist the “natural-born citizen” law to the point that they insist a presidential candidate must have not only been born on American soil, but must have both parents born on American soil. You should hear Cruz present this—about a minute in:


Trump’s response appears to me a combination of embarrassment and failure to understand what Cruz is saying. To view this and think Trump came off better is to fail to see.
That’s why the pundits’ response was so puzzling. To get a view of what actual Americans saw, it helps sometimes to watch Frank Luntz’s focus groups. Usually he asks for a raise of hands for the winner. This time it was so clear, he let them just say it. With one voice, they said “Cruz.”

Another attack that was supposed to have thrown Cruz off the rails was his comment a few days ago abut Trump being a New Yorker, and we all know what New York values are. We do. But Trump took issue with that, as did a few newspeople who live and work in New York (Megyn Kelly was one). So that nonsubstative issue also came up at the debate. And Cruz said people outside Manhattan know what he means by New York values: not very many conservatives come out of Manhattan.

Trump countered with William Buckley. Yes, Buckley was conservative. But what was remarkable about him was his ability to be conservative and good humored while surrounded by unfriendly liberals. And he’s been dead for some years now. In a city of 8.4 million, Trump can only recite one person—one who is no longer living.

He might have mentioned Rudy Juliani, who was a very successful law-and-order mayor there, and a Republican. But he’s not a conservative either and would have only proved Cruz’s point.

New York conservatives aren’t completely unheard of. But they are rare. I saw a figure of voters in Manhattan (not the whole city, but representative for our purposes). Of registered voters, 82% were Democrat, and 12% were Republican.

Being Republican does not necessarily mean conservative, especially Constitutional conservative, which Ted Cruz is. In Texas we could estimate maybe 50% are conservative—in this reddest of red states. New York is much more likely to produce “progressive” Republicans. But to be generous, if we say half of Manhattan Republicans are conservative, that’s 6%. That’s only 6 out of every 100 voters. They’re as outnumbered as blacks voting against Barack Obama. So that means Cruz’s statement is accurate.

Being referred to as having New York values does not mean all New Yorkers are bad people, or that all their values are bad. He was, as he said clearly, referring to the tendency to be socially liberal—favor abortion and gay marriage, disfavor freedom of religion and the right to bear arms. But the only values Trump could come up with were the ones that matched the whole rest of the nation after 9/11. Those weren’t at issue. Only someone as thin-skinned as Trump (or Obama) would jump at the chance to misconstrue.

But Trump took it personally. He takes everything personally. He would rule personally, by his gut, regardless of the law or the Constitution. I do not trust his New-York-values-laden gut. Or him. Or his temperament or preparation for this powerful position.

I do trust Ted Cruz, who handled the attacks with calmness, good humor, and an extraordinary command of facts. Even on those ridiculously irrelevant issues. On the issues that count, he is very prepared.

One of his better points (and it was offered first by Dr. Carson) is that, if we do not elect a Republican (and I add, a conservative dedicated to the Constitution), the next president will appoint three or four justices who agree with the dissenters on the Heller case: they believe in depriving Americans of the right to defend themselves with arms. As Carson put it, if “a progressive gets in there and they get two or three Supreme Court picks, this nation is over as we know it.”

Since Trump has agreed with the Clintons on so many issues over the years, I have no confidence that he would appoint better jurists to the Court than Clinton or Sanders.


In terms of the Spherical Model, Trump would do nothing to move northward; he might move the country further southward. Most of the candidates might be capable of moving us a tick or two northward, toward the equator. Cruz is determined to move us up where we have the opportunity to enjoy freedom, prosperity, and civilization.
Posted by Spherical Model at 4:07 PM