Back in September 2011 I wrote a couple of pieces about ultimate good. In one called Ultimate Right and Wrong"  I referred to a lecture I went to with American Heritage professor Brett Latimer. He pointed out the dichotomy between two groups of people: those who believe in ultimate Good and those who don’t. Those who don’t use relative beliefs as their standard.

He used a formula for looking at things:

So, capital G means ultimate Good—what is permanent, unchanging, and revealed to us by God, and necessary for civilization.

Dogma is the way a culture goes about trying to reach ultimate Good. For example, chastity (no sex outside of marriage) is a revealed G, which gives us strong families, the basic unit of civilization. A head scarf and burka might be a culture’s way of being modest in an effort toward reaching that ultimate G; those cultural requirements would be dogma, a little g. A culture that thinks music (at all) or dancing (at all) should be taboo because they can lead to impure thoughts—that would be a little g. People who believe in ultimate G can differ markedly on little g practices to achieve G.

Relativists don’t look at the anything as G; they look at various versions of g that they think are ridiculous and conclude that all dogma is wrong, proving to them that no ultimate G exists. Instead, they believe all beliefs are equally true and relevant. This is represented as b=b: one belief is equally as true and relevant as any other belief.

But a society will have some version of requirements and laws. So, in a relativist world, the “law” becomes what those in power believe. This is represented as capital B, for the ruling belief.

Who decides the capital B? Whoever is in power. And it can change day to day.

Truth doesn’t matter, because everyone experiences their own truth. However, if your “truth” doesn’t agree with the truth of those in power, you may be coerced into re-thinking until you stop expressing what you believe is true. Because, even though relativists start with the idea that one belief is just as good as another, when they invent a capital B, no other belief is acceptable.

That explains some of the news this past week. Obamacare (the ACA) has increased costs, coerced millions of Americans to buy services they do not want, attempts to force Americans to pay for things that go against they’re deeply held religious beliefs (abortion), and has caused many lost jobs and contributed to economic stagnation—and it doesn’t meet any of its purported purposes, like lowering health care costs and providing coverage to more people. [Analysis from Heritage Foundation here, including an interactive graphic showing how much better off you’d be without the ACA.]
But the president stands before a microphone and with a straight face claims, “There can be no doubt that this law is working. It has changed, and in some cases saved, American lives. It set this country on a smarter, stronger course….This morning, the Court upheld a critical part of this law—the part that's made it easier for Americans to afford health insurance….If your family gets insurance through your job -- so you're not using the Affordable Care Act -- you're still paying about $1,800 less per year on average than you would be if we hadn't done anything.”

These are provable falsehoods, not just opinion. But he’s not held accountable for the lies. Because he wants the reality to be what he says it is, and he’s in the power position, joined by other relativists.

Hillary Clinton sets up an illegal private server, from which she conducts official Secretary of State business—which means our enemies were able to hack in and get access to those emails, but to us she says it was just private things, like her yoga class schedule or maybe some recipes—and that she provided everything that was pertinent. Except that she doesn’t include anything from any server about communications during the Benghazi attack. Except that the slow trickle of emails that have been grudgingly produced show otherwise. But she gets away with saying, “What difference does it make?” and goes ahead assuming she will be our next president.

[I’d really like to have a president worthy of a capital letter P, which I have been refusing to use with our current occupier of the office.]

So, truth is one of those ultimate Goods that relativists don’t believe exists. Instead, they distort and lie, and then insist that we go along with their version of reality.

Here’s another ultimate G: marriage is a God-given institution, to bind a man and woman together, to bear and raise children in order to build a thriving civilization.

Relativists start with b=b: a married heterosexual couple is equivalent to a homosexual couple. I have a hard time buying the equivalence when, this week, following the erroneous SCOTUS ruling, “gay pride” parades included plenty of indecent exposure, and spitting upon clergy, and a group flipping their middle finger at a portrait of Ronald Reagan. Those are equivalent to my husband and me raising our children to be civilized?

But they are indeed claiming equivalence. And then the man-made B takes over: you’re not allowed to believe that man/woman marriage is better than homosexual couples, and you must redefine marriage to include homosexual couples. If you refuse, you will be persecuted and coerced to align with the capital B. You might be deprived of your business, fined, maybe imprisoned, and receive hate and threats.

Our Constitution is full of Capital Gs, because it was written by believers in ultimate Good. So it’s not surprising that the first one listed in the Bill of Rights is the freedom of religion.

The relativists start with the assumption that belief in religion = belief in no religion, or secularism. But when the relativists get power, they don’t stop at equivalence; they impose a capital B. So the new B is, "We will allow you to believe in your religion as long as it doesn’t interfere with our enforced secularism. You can’t talk about religious beliefs in public places, like schools. You can’t expect to choose work you will do or not do based on your beliefs. You must pay for things against your beliefs if we say so."

Requirements of the secular Bs could include making cakes, doing photography, or providing a venue in your home for a same-sex wedding ceremony. [Good list here.]  It could include being forced to personally be the clerk who licenses such a wedding. It might, as has happened in other countries that have experimented with same-sex “marriage,” include being a clergy forced to perform the ceremony for a same-sex wedding. Coercive measures may include threat of job loss, threat of loss of tax-exempt status, threat of loss of power to perform any marriages, loss of ability to offer adoption services to anyone if same-sex couples aren’t given preferential treatment. And more we are yet to imagine.

In the world of ultimate Good, freedom with responsibility is G, and slavery is antithetical to G. But in relativism world, words mean something different. In past centuries relativists thought slavery was acceptable because of rationalizations they could come up with to justify it: not all lives are equal; it’s tradition; our economy might be negatively affected. After a Civil War that ended slavery in our country, relativists still find ways to justify it. That insistence that a Christian florist uses her skills to service a same-sex “marriage” is slavery—beyond what was institutionalized slavery, which couldn’t force use of artistic skills. Insisting that churches alter their beliefs is slavery, not to mention a complete rejection of the First Amendment. And remember, in reality world, rights come from God, not government. So it is never right for government to pretend it can grant or take away those rights at will.

Is there a vast difference between the pro-slavery types of the 1860s and those who today kidnap vulnerable young people and immigrants and enslave them? Because some reports claim there is more slavery in the world now than during institutional slavery. And none of it is done by believers in ultimate Good.

Valuing life is an ultimate G. Relativists think some lives may be valuable, and others not so much. For example, unborn life isn’t valuable if it’s unwanted by the adults who engaged in the act that led to the pregnancy. They might think the elderly or very ill might not be worth caring for, because younger, healthier people are more valuable. Some of these very relativists (including at least four members of the Supreme Court) warp life value by claiming there should be abortion and euthanasia (no value for innocent life) but no capital punishment (value for heinous criminal life). 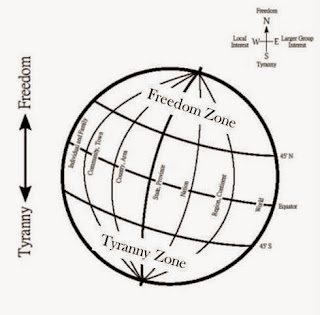 This is our new reality in the relativistic southern hemisphere. Relative efforts to get an ultimate Good always fall short. Inevitably. If you aim several feet below a target, you’re more likely to hit the floor than the bullseye.

In Spherical Model terms, Ultimate Good is the way to the northern hemisphere, where you can enjoy freedom, prosperity, and civilization. Relative Belief just changes from one relative belief to another, depending on who manipulates mass opinion successfully, leading inevitably to tyranny, poverty, and savagery.

I choose Ultimate Good.
Posted by Spherical Model at 8:18 PM