Path Forward for Us Dissidents

dis·si·dent[i]
ˈdisədənt/
noun
1.     1.
a person who opposes official policy, especially that of an authoritarian state.
"a dissident who had been jailed by a military regime"

I enjoy people who can see a positive direction, even from a dark place. Ryan Anderson is such a person. He is the William E. Simon senior research fellow in American Principles and Public Policy at The Heritage Foundation. He specializes in issues of marriage and family. In short, he is the best public voice on marriage in the public arena today. I read almost everything he writes, and see as many videos of his speeches and interviews as I can.

His book came out last week: Truth Overruled: The Future of Marriage and Religious Freedom. I haven’t read it yet. I’m still debating with myself between Kindle and hardcopy. The paperback isn’t available until the end of August, so that may decide it for me. (Plus, it has text-to-speech enabled, which fewer Kindle books have lately, and I appreciate that.)

We, who know the truth about marriage, and how valuable—essential—it is to civilization, have been feeling low this month, following the SCOTUS ruling on Obergefell v. Hodges. It wasn’t decided according to the Constitution. It wasn’t decided according to the beliefs of a large majorities is most of the states—wherever the people have been allowed to voice their views. It wasn’t anything but a capitulation to an intense and relatively short (decade) campaign to alter public opinion on what marriage is. And it has the ugly impact of curtailing the religious freedoms of anyone who knows the truth about marriage.

It has made dissidents out of people like me who hold to the truth known for millennia when the authoritarian state says we’re supposed to believe something else.

So there has been reason to mourn.

But Ryan Anderson is ahead of the game, ready to take the necessary positive steps. 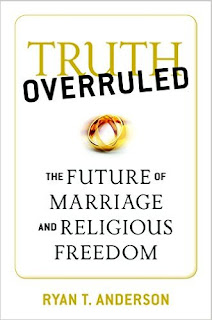 In an article, as well as in an interview, this past week, Anderson makes a comparison with the pro-life movement following a similarly bad SCOTUS ruling in Roe v. Wade. At that time, people who knew the truth about the human life and value of unborn children were told, “You lost the argument; get over it.” And they were told the next generation would be on the “right side of history,” would be pro-abortion. But, in fact, this upcoming generation is more pro-life than their parents' generation. Partial birth abortion is outlawed already nationwide. Many states have outlawed abortions after 20 weeks—the time at which the fetus can be shown to suffer pain (which other nations already use as a standard). How could this progress be made, when the debate was supposedly shut down by the Supreme Court?

The pro-life movement did some things very right. They made it clear that the ruling was judicial activism—because it was. Even Justice Ginsburg has been heard to say that it was a bad ruling. It had precious little connection to the actual Constitution.

Then the pro-lifers used science, which tends to bear out the truth, if it’s real science. So they have been able to show that the unborn child has a heartbeat, has its own DNA, responds to stimuli, looks human, and is not simply a blob of tissue.

Their progress was evident this past week, when information came out about Planned Parenthood  “selling” fetal body parts—when both the late-term abortions that allow for such harvesting are illegal, as is the selling of fetal body parts. The claim that they were “donating” with reimbursement plus a bit doesn’t stop the public from recognizing the horror of what they’re doing, and being disgusted with the cavalier attitude with which they do it.

Strong majorities are against late-term abortion. Overwhelming majorities are against partial-birth abortion. More people are recognizing that when pregnant women see a ultrasound of their growing baby, they are less likely to go through with the abortion. The other side is left blustering that pregnant women shouldn’t be forced to learn the truth about their babies. Or they go overboard and claim the right to kill a baby even after birth, revealing their savagery.

We’re nowhere near outlawing abortion on demand, but we’ve made progress.

So, looking at that pattern, here are the steps Ryan Anderson suggests we take—over the next generation and beyond—to repair real marriage.

1.      We must refer to the ruling in Obergefell v. Hodges as judicial activism, and be able to state clearly why. The dissenting opinions by Scalia, Alito, Thomas, and Roberts provide clear arguments. There will be other resources as well—including Anderson’s new book.

2.      We must protect our freedom to speak and live according to the truth. We need to keep speaking the truth, with calm clarity and reason. Accusations of bigotry won’t fit when good people keep getting called bad by unreasonable, intolerant “winners.” We must press for legislation that protects religious liberty—in personal lives and businesses, as well as in churches. This would be similar to mainly successful pro-life efforts to make sure no one would be forced to perform or pay for an abortion when doing so would go against their personal beliefs.

3.      We must redouble our efforts to make the case in the public square. Bring in the new and growing social science that shows the importance of having a mother and a father in a child’s life. Don’t let the false “science” claim of no difference stand. As Anderson points out, “Pro-lifers did much more than preach, launching a multitude of initiatives to help mothers in crisis pregnancies make the right choice.” I don’t know yet, beyond continuing to write, what that will look like in the marriage debate. It may include what Utah did, combining legislation that protected homosexuals in housing and employment (where discrimination was already illegal) with agreements to protect religious liberties. It might be in supporting children who have been raised with two mothers but no fathers to know that their sense of missing something is valid—every bit as valid as such feelings in children raised by singe parents.

There’s much to do. It’s an uphill battle. But if we have any interest in civilization, and the freedom and prosperity that go with civilization, then we must gear up for what we need to do.


[i] From online dictionary: https://www.google.com/webhp?sourceid=chrome-instant&ion=1&espv=2&ie=UTF-8#q=dissident%20definition
Posted by Spherical Model at 3:38 PM