Last fall we took a trip to Washington, DC, which I reported here in September, in four parts. I’m repeated parts of them today, in the reverent spirit of Memorial Day, plus maybe some additional things.

We got to witness the changing of the guard at the Tomb of the Unknown Soldier. This was one of the most reverent moments of our trip. We all stood, in silence, throughout. The ceremony takes place whether people are there or not. They revere those sacred dead; we are invited to join them in that honor. We felt privileged to witness it.


After the ceremony, we were waiting for our tour bus, and I ran off to take a few more photos. And I noticed this additional ceremony, the retiring of the flag in early evening. There was no crowd around. The soldiers were doing the honorable ceremony, because that’s what they do. I took the photo from a distance; I was glad I got to see this sacred moment.


I know it doesn’t sound like a thrilling vacation to go to a cemetery, but Arlington Cemetery is worth experiencing. It’s vast, and beautiful, and sacred.


The Iwo Jima Monument relates to World War II. It is located just outside the Arlington Cemetery. We saw it just before sunset, which made photography a challenge, but the sky toward the sun was stunning. This photo is taken with back to the sun.


﻿
One of my favorite memorials was the World War II Memorial, located between the Lincoln Memorial and the Washington Memorial. We were there on a day when busses were bringing WWII veterans, many in wheelchairs and in their 90s, to honor those they served with most of a lifetime ago.

﻿ There’s a wall of stars at the memorial; each star represents 100 who lost their lives. There are 4048 gold stars, representing the 405,399 American dead or missing.


The Vietnam Memorial Wall is most impressive maybe because of its length, full of names of those lost in service in that war.

On the opposite side of the Lincoln Memorial is this Korean War Memorial. It also has a reflective wall, this one with faces looking out. The wall is alongside a garden of statues, soldiers walking through undergrowth, as you might have seen them in action. I hadn’t been aware of this memorial before the trip. But I saw it in a scene of a TV show after returning home. This was another place I really felt the reverence. Maybe it relates to having had a son stationed in Korea. 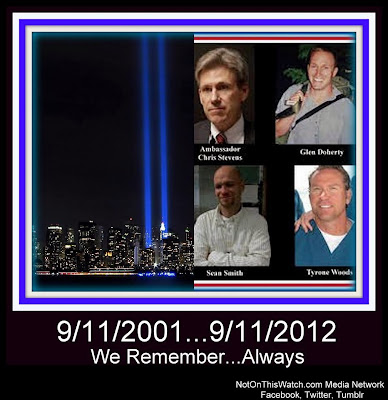 I want to add this photo, honoring four fallen Americans in Benghazi, September 11, 2012. We’re still trying to find out what happened, and why the administration lied about what happened, and continues to obstruct the investigation. The honor is for today; we’ll save the troubling discussion for another time.
Posted by Spherical Model at 11:54 AM