The Free Exercise of Religion Clause


One of my most popular posts (in fact, the second most viewed) is my 200th post, in January 2012. It was a little grammar lesson about the religious freedom clause of the First Amendment. It's short, so I'm about to re-post some of it:


First, let’s do a little grammar practice. This is what the 1st Amendment to the 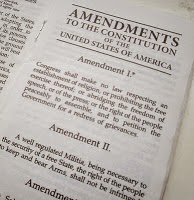 Constitution says concerning religion:
Congress shall make no law respecting an establishment of religion, or prohibiting the free exercise thereof
There are two parts. So how would it read if we clarified by making each part its own sentence?
·         Congress shall make no law respecting an establishment of religion.
·         Congress shall make no law prohibiting the free exercise of religion.
It’s not really that difficult, grammatically. The second has been violated many times because of some twisted misunderstandings about the first. What would it mean for Congress to establish a religion? It would mean that they would make one particular religion (sect) the preferred religion—they would “establish” that religion as “the” official religion of the nation. Adherents to that particular faith would have preferred status under the law. Our founders didn’t prevent particular states from establishing their own state religion, and in the beginning several did indeed have state religions. But the Constitution prevented that from ever being done at the federal level. (And states figured out on their own it wasn’t a good idea at their level either.)
There is nothing about getting all religious expression out of public life. In fact, getting religious expression out of public life would indeed violate the second part; it would be prohibiting the free exercise of religion.
So what about non-believers, or different believers? They get to tolerate differences in religious beliefs, just like the rest of us.


I wrote that the week the Supreme Court voted unanimously to sustain a parochial school’s right to terminate an employee who refused to sustain their religious beliefs. Usually the Supreme Court has ruled in favor of religious freedom. More Obamacare mandate cases are coming up this spring.
In the past, religious freedom won on religious exemption for churches, and religious exemption for religion-affiliated non-profits, such as Catholic schools. The First Amendment also prevailed on exemption for closely held corporations, such as Hobby Lobby. Still to come are rulings on Little Sisters of the Poor, an independent non-profit serving the elderly poor, clearly formed and run by religious people—but the administration refuses to give them an exemption as a religious entity. We also don’t have any exemption in sight for larger corporations that were formed based on religious people and are run by board with those religious principles in mind.
The federal government has no business forcing anyone to purchase any service. But aside from that, forcing someone to make a purchase that goes against their religious beliefs is clearly in violation of the first amendment protection of religious freedom.
Let’s be clear: the Constitution does not grant religious freedom. God gave us religious freedom. The First Amendment is a declaration to make it crystal clear that the limited powers granted to the federal government do not include any power to prohibit the free exercise of religion. We would still have those freedoms, even without the Bill of Rights. Those first ten amendments were put there just in case there came a time when the people no longer understood what was self-evident to the founders.
We are living in such a time.
I’ve written a few times on business people who are being forced to perform services against their religious beliefs, most often regarding same-sex “marriage,” a movement becoming more and more coercive against religious people. We’re on a knife-edge, waiting for SCOTUS to rule on same-sex “marriage” this term. Oral arguments will be heard April 28th. They’ve allotted more than the usual hour, planning to determine two issues: Are states required to redefine marriage to include same-sex couples? (It’s often erroneously worded as, “Are states allowed to ban same-sex couples from marrying?”) And also, are states required to recognize same-sex “marriages” of couples “married” in states where such “marriages” are legal?
In Texas there’s a bill in the legislature, HB 623, making it clear that officials cannot grant same-sex “marriage” licenses against Texas constitution and law. (Breitbart had a piece on the bill when it was filed.) Lest you think there will be confusion, we already don’t recognize illegal marriages; for example, in some Middle Eastern countries, polygamy is legal; if such people move to the US, only one wife is recognized as legal. In addition, within the US, some states recognize common law marriages, but not all states are required to recognize such marriages. So there’s already precedent for handling marriage law differences. It’s a state’s rights issue, regardless of what SCOTUS rules. But we can still pray that the rulings go the right direction, to minimize the momentum of the hate-religion groups, chief among which are LGBT activists.

Another religious persecution case came to my attention this week. Catholic schools in San Francisco. As you would expect, teachers in Catholic schools are supposed to uphold the doctrines of the religion. That includes “denouncing masturbation, pornography, same-sex marriage, contraception and other issues that, in line with Catholic teaching, are described as ‘gravely evil.’” Seems totally unsurprising, if you know anything about Catholic doctrine. But some California senators and assemblymen took issue with the statement of belief, and are asking for a discrimination investigation of the archdiocese. Ryan Anderson wrote about this, and a list of other attacks on religious institutions. He included these:
·        Gordon College, a religious school, with a conduct standard (I believe for students and employees) of chastity—no sex outside of marriage—is being investigated for discrimination based on that behavior standard.
·        Notre Dame and Wheaton College being forced to provide contraceptives according to the HHS mandate.
·        Washington, DC’s private schools, including religious schools whose beliefs would be violated, to be required to recognize LGBT clubs and host “gay pride” events on campus.
I went to a large religious-affiliated university. I can't imagine any of these coercions being submitted to there. But the need for defiance may be simply a lawsuit away. I don't know.

What is clear, if you read the First Amendment with any basic understanding, is that the federal government is making laws (or making up meanings of laws) prohibiting the free exercise of religion.
Posted by Spherical Model at 1:48 PM