Today is the second part looking at the questions to be answered in oral arguments before the Supreme Court on April 28th. There are two questions being addressed.
We covered question 1 in Part I. Today we’ll cover question 2, plus take a look at the status of marriage laws in the states prior to a ruling.
Question 2 relates to Article IV of the Constitution, Section 1: “Full Faith and Credit shall be given in each State to the public Acts, Records, and judicial Proceedings of every other State.”
Normally, a contract formed in one state is upheld in the other 49 states. But marriage isn’t a normal contract. A simple contract between two people—such as co-ownership of a boat—would hold up beyond state boundaries. But a marriage is more complicated. It’s more than just a two-person contract; government and society are involved in honoring the particular thing that marriage is. While the marriage remains intact, we offer joint ownership of property accumulated during the marriage—which allows for one spouse to stay home to care for offspring while the other spouse earns income for the whole household, and other arrangements particular families might find beneficial. Insurance is different for married and single people. Taxes are different for married and singles (sometimes choices can be made to do what is most beneficial, filing jointly or separately).
Then there are things the state is required to do when the participants choose to end the contract—to divorce. States differ in general rules for dividing property. And then there’s the more difficult issue of dealing with child custody—preferably in the best way possible for the children while not abrogating the rights of fit parents.
Note that states already differ in ways they handle divorce; the couple is subject to the laws of the state in which they divorce, regardless of what the laws were where they married. The Full Faith and Credit clause does not require a state to have its laws subsumed within some other state’s laws, just because the contract was formed there.
Things would be less messy if no same-sex “family” had child custody issues. No such couple can produce children, so if a child is genetically related to one or the other, the simple decision would be to allow custody to the biological parent. If laws had been maintained to allow adoption only by married husband and wife, there would be no messiness now, in which homosexual couples complain that we, society, have somehow marginalized their children by making it seem that their family forms were less valid.
We did not make it that way; nature made it that way. And so far these “parents” are failing to prove themselves equally valuable to children or society. More studies are showing that same-sex parented families have outcomes seriously inferior to married parent families.[1]  Among the amicus briefs offered to the 5th Circuit Court in January came from a group of now-adult children raised by same-sex parents, declaring the problems they faced, ranging from sexual confusion, to fear of disagreeing with the same-sex “marriage” promoters (risking ostracism from family relationships), to subjugation to sexual predation—apparently unprotected by the parents, and possibly even enabled by those parents.
We do, however, have precedent for how to treat marriages formed in other states (other sovereign nations) that do not meet our basic definition. Various countries throughout history, and currently in our world, allow for multiple wives. Our government does not recognize more than one as a legal wife. Most of the time there is not interference with these people’s chosen family forms—unless they start requiring government recognition, such as in taxes, welfare, or child custody. It would be a simple thing to apply the same pattern among the united sovereign states in the US. If there are differences in what can be accepted as a marriage, then let the couple be aware of where they are going, as they do now concerning divorce.
No one is going to stop these people from traveling state to state and staying together. Nobody cares. But if they move to a non-recognizing state and then start requiring the state to determine their division of property and child custody disagreements, they shouldn’t expect the state to deal with them as their state of origin might. Nor should they expect the state’s tax laws to change just to satisfy them.
It shouldn’t be possible for a small state, like Massachusetts, which had same-sex “marriage” imposed on the people by its state supreme court’s misreading of their constitution, to suddenly by fiat go against the will and belief of the people in all the other states. That is not the intention of the Fourteenth Amendment, nor of the Full Faith and Credit clause.
Changes happen day-by-day lately. But I’ve attempted to find the current status of marriage in the United States and its territories. By my count, currently 25 states have had same-sex “marriage” imposed on them regardless of the state’s laws and constitutions to the contrary. Ten states plus the District of Columbia have had same-sex “marriage” imposed on them by state legislatures, with varying percentages of agreement from the people. Eight states have court rulings attempting to impose same-sex “marriage,” but these are under appeal and haven’t been imposed yet (or fully imposed in some cases). Seven states and the remaining five territories still have their original definition of marriage—so far. 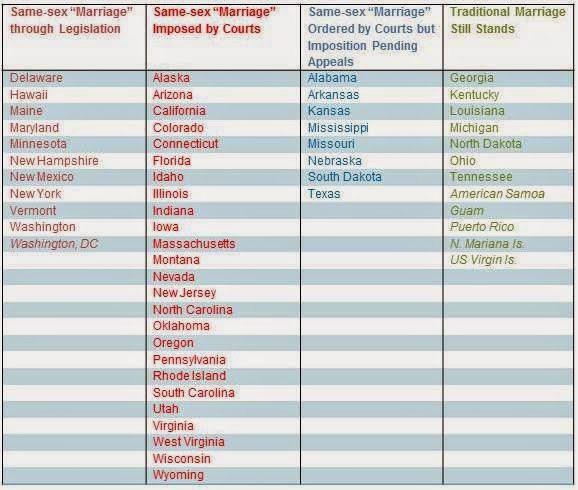 If the SCOTUS ruling is that states have no right to define marriage in a way that doesn’t include same-sex couples, that would be at odds with the purpose of the 14th Amendment, and it would reverse the Court’s most recent ruling.
If the ruling on question 1 is that states have the right to their own definitions, as was made clear the last time the Supreme Court looked at the issue, then it would allow any or all of those 25 court-imposed states to revert to their traditional definition of marriage. That would be a swing from 35states licensing same-sex couples to only 10 (plus DC). And it would move the number keeping the traditional definition of marriage to 40 plus the territories. If that is the ruling on question 1, then it is likely that individual state laws will be respected in question 2 as well.
An anti-freedom ruling on either question would face state sovereignty challenges in a number of states (Texas, for one).[2] But the ruling would be expected to go beyond the court cases at issue and apply to every state.
So the stakes are high. Certainly higher than anything court related was intended to be by the writers of the Constitution. We’ll be watching and praying that the justices understand the law and abide by it, for the sake of civilization as we know it.
While the questions address specifically whether same-sex "marriage" will be imposed generally, we should be aware that every time same-sex "marriage" is allowed, freedom of religion comes under attack. Civilization requires a religious people, self-governing according to codes of conduct based on the Ten Commandments, and protecting family as the basic unit of society. Same-sex "marriage" isn't just a question of whether homosexuals have an innate right to marry whoever they choose regardless of the definition of marriage; it is a question of whether we choose to live in a civilized society, along with freedom and prosperity--or the alternative of savagery with tyranny and poverty.

[1] Citations related to same-sex parents and children’s outcome:
• Parliamentary Report on the Family and the Rights of Children, January 2006.
• Douglas Allen, “Review of the Economics of the Household,” October 2013, described in “A Married Mom and Dad Really Do Matter: New Evidence from Canada,” by Mark Regnerus: http://www.thepublicdiscourse.com/2013/10/10996/
• Loren Marks, “Same-sex parenting and children’s outcomes: A closer examination of the American psychological association’s brief on lesbian and gay parenting,” Social Science Research, Volume 4, Issue 41, [  http://www.sciencedirect.com/science/journal/0049089X/41/4     ] July 2012, pp. 735-751.
• Mark Regnerus, “How different are the adult children of parents who have same-sex relationships? Findings from the New Family Structures Study,” Social Science Research, Volume 41, Issue 4, July 2012, Pages 752–770.
• Ana Samuel, “The Kids Aren’t All Right: New Family Structures and the ‘No Differences’ Claim,” The Witherspoon Institute, June 14, 2012, http://www.thepublicdiscourse.com/2012/06/5640/#_edn1. [See the footnotes as well.]
• Ann Bailey, “How do children fare when reared by same-sex couples?” United Families International Blog, June 11, 2012 [has an excellent graphic]: https://unitedfamiliesinternational.wordpress.com/2012/06/11/how-do-children-fare-when-reared-by-same-sex-couples/
[2] The Texas Legislature is currently considering a bill that would disallow officials from granting licenses to same-sex couples or any others that do not meet the requirements of the law, as written in the state constitution; it is a sovereignty issue. More on this bill in a Breitbart news item:  http://www.breitbart.com/texas/2015/01/11/texas-rep-introduces-bill-to-defend-traditional-marriage-and-state-sovereignty/ .
Posted by Spherical Model at 12:18 PM