I recently read Malcom Gladwell’s latest book, David and Goliath: Underdogs, Misfit and the Art of Battling Giants. His books are a collection of data, combined with stories, making surprising, often counterintuitive, points. He and Charles Murray are the best I know at writing statistics books for general reading. And Gladwell’s tend to be less numbers-heavy and more weighted with stories. They can be a fun read. 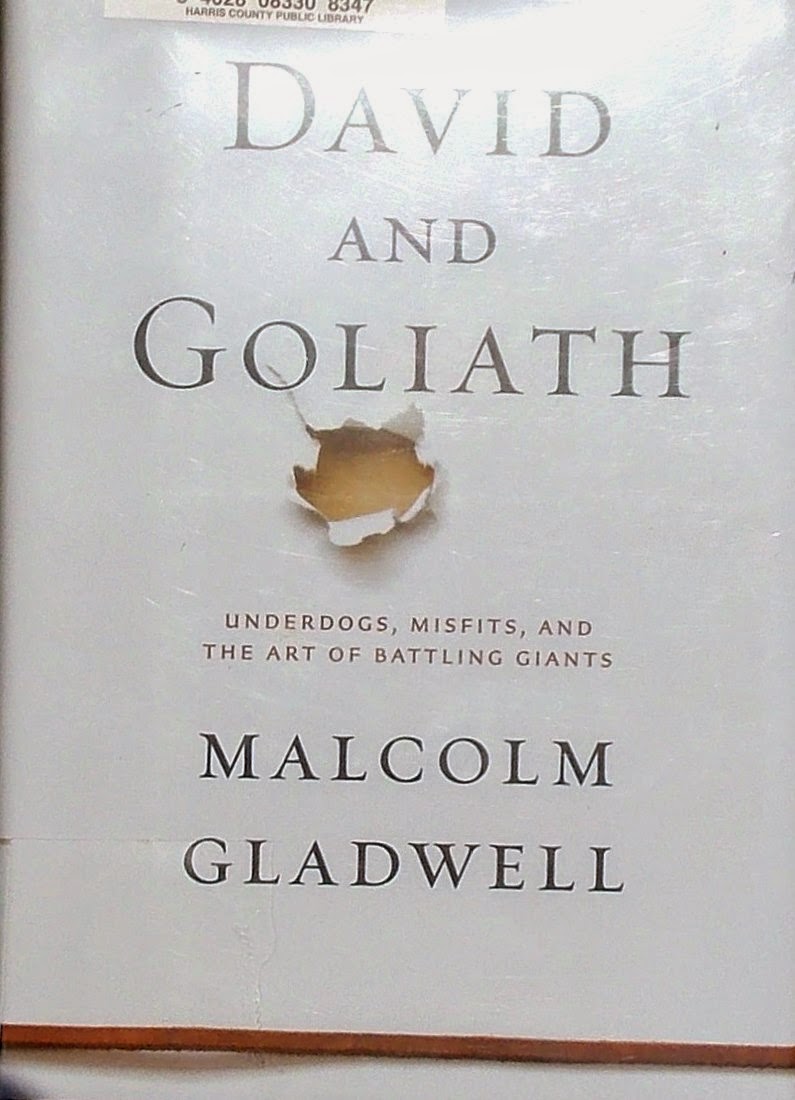 His underlying theme, in David and Goliath, is that those who appear to be the underdogs might actually have advantages that aren’t obvious, but might explain why they win against the odds. With the David and Goliath story, he passes along various scholarly details, saying, “No one in ancient times would have doubted David’s tactical advantage once it was known that he was an expert in slinging.” (Notes, pp. 279-28.)
David was powerful like an artilleryman, as opposed to an infantryman. He was skilled and practiced, as boys of his day were likely to be, given time to practice. Goliath, on the other hand, may have suffered from a glandular disorder called acromegaly. Besides making him very large, it was associated with a partial blindness. So Goliath needed David to come in for close contact battle. All David needed to do was attack, with skill, from a distance. Essentially, Goliath brought a sword to a gunfight.
The book sorts through a number of underdog stories, from a girls’ basketball team to Martin Luther King, Jr., and the Civil Rights movement. Sometimes the stories seem only peripherally associated to the theme (my opinion), but they still make for an interesting read.
One of the ideas Gladwell talks about is the “principle of legitimacy” in leadership, or authority: “When people in authority want the rest of us to behave, it matters—first and foremost—how they behave” (p. 207). Among the many things in the book I was marking to recall later, this one got special attention.
Remember back in the 1990s, when the Clintons and their allies were lying to the American people and then eventually saying, “What difference does it make?” and “It’s only his personal life.” Remember that? I remember thinking of the William Cowper quote, "When was public virtue to be found when private was not?"
If a leader lies to the woman in his life he has covenanted with, and lies about it to the people he serves—aware that the behavior subjects him to the risk of blackmail—can such a person be trusted with the life and death decisions of the leader of the free world? I don’t think so. Nor would I trust anyone else who claims character has nothing to do with ability to lead.
Gladwell doesn’t continue on with the idea of personal morality, however. He looks at other behaviors that lead to authoritative legitimacy:
Legitimacy is based on three things. First of all, the people who are asked to obey authority have to feel like they have a voice—that if they speak up, they will be heard. Second, the law has to be predictable. There has to be a reasonable expectation that the rules tomorrow are going to be roughly the same as the rules today. And third, the authority has to be fair. It can’t treat one group differently from another (pp. 207-208).
Gladwell doesn’t seem to me particularly political. And if I had to guess, I’d say he leans slightly democrat. He does not go on from this point to talk about our current presidential regime. He talks about police in New York, English-Irish unrest in Belfast a couple of decades ago, and the end results of the three-strikes-you’re-out laws that started in California. All worth reading.
But I’d like to just briefly apply the three rules to this president.
·         People need to feel like they have a voice.  No.
o   This president doesn’t listen. No Republicans voted for Obamacare. Most Americans were against it, and have continued against it, with those percentages growing as the rollout continues to fail.
o   He refers to legitimate questions about an array of administration-caused scandals as trumped up faux scandals: VA deaths, Benghazi deaths and cover-up, IRS targeting of conservative groups…
o   He refuses to listen when Congress puts limits to his executive powers, and acts unilaterally outside the law


·         Consistency of rules over time. No.
o   Those seeking citizenship through the maze of legal means get turned away, sometimes for years. Meanwhile, illegals are invited and welcomed and forced on border states—and remember how Arizona was sued for being willing to help enforce existing laws? The administration claimed that it has the right to pick and choose which laws it chooses to enforce, and no state should assume enforcement is a good thing.
o   Obamacare doesn’t work—not news. So the president decides who gets exemptions, at his whim—or which rules will get postponed to after another election, breaking his own law.


·         Fairness from one group to another. No.
o   Voting violations will not be prosecuted by this justice department. When New Black Panthers were shown to be blocking voting places and intimidating voters, the DOJ said it wasn’t possible for African-American-skin-colored people (blacks, but we not supposed to use that descriptive word?) to be prosecuted for racist behavior.
o   Homosexuals, atheists, "green" businesses,and anyone else the administration favors currently, gets special treatment, exemptions, rules. But religious people are not allowed their God-given right to practice their religion. Under duress, the administration gave in and allowed exemptions for churches and religious nonprofits. It saw no need to extend that exemption to closely held companies, run by religious people, like Hobby Lobby. SCOTUS has ruled in Hobby Lobby’s favor, but only narrowly. And the dissent argument claims that the 1st Amendment right to freedom of religion goes out the window when one enters the marketplace. Courts have put small businesses—bakeries and photographers—out of business when they refused to act against conscience.


When a solid majority of Americans disapprove of how the president is doing his job, and 67% believe the country is on the wrong track, that either means—as this president and his minions assert—that it’s simply because of his color. Or it means he lacks legitimate authority to lead—because of his behavior.
Posted by Spherical Model at 2:34 PM