This past weekend I was a delegate at the Texas State Republican Convention. It’s not a presidential year, so it might seem more low key then in those other years. Still, there’s some good conservative stuff being said.


There are more delegates at the Texas convention than at the national GOP convention. And there’s a much higher percentage of those that are conservative or very conservative. So, it’s safe to say this is the biggest gathering of conservatives participating in the government process anywhere in the world.
Texans are plain spoken. In-your-face bold. And sometimes colorful with the metaphors. I’ve developed a taste for the Texas sound. (I’ve been imitating the sound pretty well since our pre-Texas years, when we started reading Hank the Cowdog books aloud.) One of the most Texas sounding was Sid Miller, candidate for Agriculture Commissioner. He always has his cowboy hat on. If I’m remembering his bio accurately, he’s a former rodeo champion. In his speech, he said the greatest threat to freedom is the overreaching federal government: “Standing up to the EPA, BLM, or any of those other dirty three-letter organizations” is what we’re about.
I think there’s a good chance we heard from the next US President during this convention. I’m not that good at prognostication, and no one has announced a candidacy yet, but some speeches sounded like the preliminaries.
There was a straw poll—and a change in the rules, so that two years from now our straw poll will have an effect on how the at-large delegates will be directed to vote. For now it was just for fun. 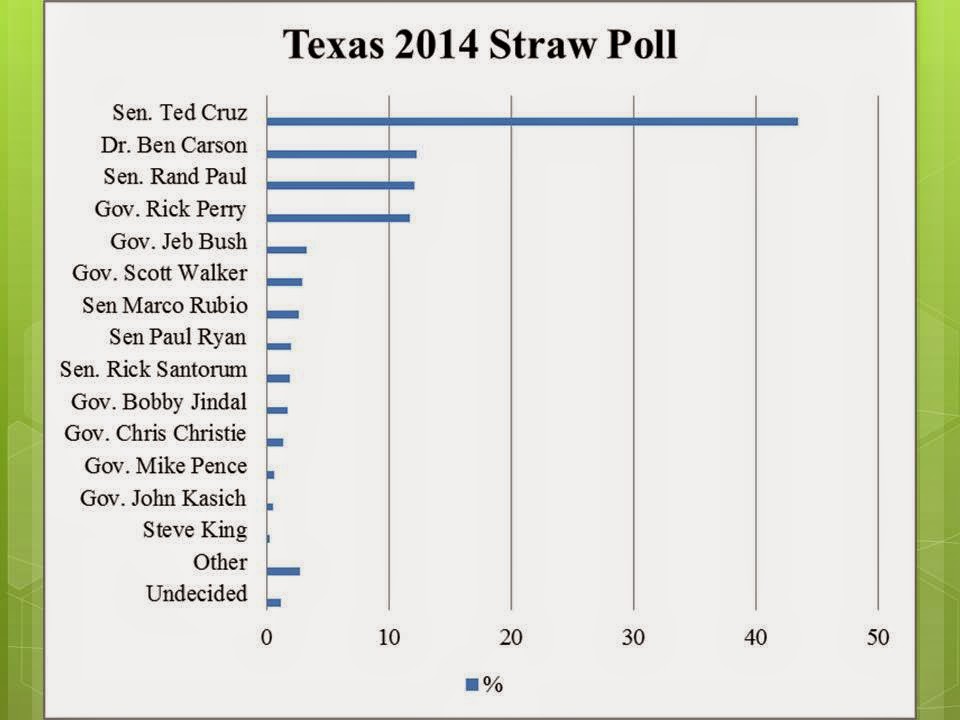 I hadn’t done a lot of thinking about Ted Cruz as a candidate for president. He’s a first-term senator, doing a stellar job there (no voting present). We’ve elected a first-term senator before, and his lack of experience is becoming more evident as he fails to learn on the job.


Ted Cruz had a lot of good experience before becoming a senator, but I do think governors are a more typical source of executive material, as a rule of thumb. But clearly other Texans have their hopes set on him. And I have to say, if he runs, I would be glad—and very supportive. (I bought myself a political button, just before they ran out, in case I need it later.)
He sounds like he just might run, although no mention of the possibility came up in his speech. I thought I’d share some highlights here, for those who didn’t get to be there. Ted Cruz, by the way, sounds like a thinking lawyer, fully capable of supporting his ideas before the Supreme Court—which he has done. He doesn’t have much of an accent, and he dresses in conservative suits and white shirts and ties. Still, he speaks very boldly, in that Texas way—and he wears cowboy boots with his suits.
His first words were, “I spent all week in Washington, DC; it’s great to be back in America.”
The speech was divided into three main parts, with some extended comments on each. Part I was Defend the Constitution. He quoted Thomas Jefferson: “In questions of power, let no more be heard of confidence in man, but bind him down from mischief by the chains of the Constitution.” Cruz said we should defend all of the Bill of Rights.
Of the Second Amendment he offered this Texas perspective: “In Texas, gun control means hitting what you aim at.”
Of the First Amendment, he referred to the litigation against Little Sisters of the Poor, in which the federal government claims it has a right and overriding interest in forcing nuns to pay for abortions of others. Ted Cruz offers a “simple rule of thumb—if you’re litigating against nuns, you’re doing something wrong.”
When referring to privacy, as in the Fourth and Fifth Amendments, he said, “Please leave your cell phones on today—we want Obama to hear every word we say.”
Part II was Restore America to Leadership in the World. He talked of the dangerous vacuum created when America fails to lead. Two week ago he was in Israel and visited with Natan Sharansky, who had been in a Russian gulag near the end of the Cold War. He and fellow prisoners used to pass along Reagan’s words, when he called the Soviet Union an “evil empire.” When he gave his simple plan: “We win. They lose.” When he stood at the Brandenburg Gate and said, “Mr. Gorbachev, tear down this wall.” This was immediately after the ineffectual administration of Jimmy Carter. Ted Cruz was pointing out how quickly things can turn around when you change from malaise to bold leadership.
He reminded us that, when Iran appointed a terrorist as their ambassador, he put forth legislation to bar that man from entry into the country. It passed the Senate 100-0. It passed 435-0 in the House. Then, under that kind of pressure, Obama signed it. Some things need to be acted on, and Ted Cruz is willing to do that. As he put it, in his colorful way, “We will no longer play footsie with the mullahs of Iran.”
Cruz called for rescue of Christian prisoners, such as Pastor Saeed Abedini, imprisoned in Iran for professing his Christian faith; and Miriam Ibrahim, a lifelong Christian woman married to an American citizen, being held in Sudan for the crime of “converting” to Christianity from Islam, punishable by death. Cruz says, “Where is the president of the United States? Why isn’t he standing up on the world stage and calling for her return?  Bring our Americans home.”
Part III was Bring Back Jobs and Economic Growth. He said, “For five years we’ve been trapped in the Great Stagnation.” [I love that phrase and plan to use it hereafter.] And those who struggle the most are the ones most hurt by it. How do we turn that around? Get back to free-market principles. Specifically, “Unleash an energy renaissance.” “Audit the Federal Reserve.” “Abolish the IRS.” And “Repeal every blessed word of Obamacare.” I think the word blessed in that context was not meant to imply those words are holy, but rather the opposite.
I got to hear his father, Pastor Raphael Cruz, earlier, in my Senate District caucus meeting, and he’s an impressive speaker as well. Ted Cruz quoted his father, who fled communist Cuba 57 years ago: “I lost my freedom once, and I’ll die before it happens again.” Ted Cruz imagined a time when our children or grandchildren could ask, “What was it like, when there was freedom?” We never want to have to answer that question. We together claim freedom.
There’s plenty more to share from the convention. Wish you could have been there.
I think I’ll need another day to share highlights from some of the better speeches: Rand Paul, candidate for Texas Governor Greg Abbott, candidate for Texas Lieutenant Governor Dan Patrick, and others. And there’s a whole discussion about the business of getting a party platform, which is probably worth its own post. Somewhere in the middle of this series comes Father’s Day, so we’ll have to just patiently get it all covered. So come back for eventual parts II and III.
Posted by Spherical Model at 5:01 PM