Examples of the Believers*

I was reminded the other day of a book of research put out several years ago: Amazing Grace: How Religion Unites and Divides Us. It’s about religion in America. The reminder fit in with what I see with the Spherical Model: religion civilizes. 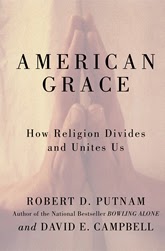 Some of what I came across relates to my own religion, The Church of Jesus Christ of Latter-day Saints. Here are some of the findings:
·         In measuring “religiosity,” Mormons registered at a high level. In other words, among those with my beliefs, my devoutness is kind of normal.
·         Mormons are more likely than most to keep their childhood religion into adulthood.
·         Religious people in America account for much of our country’s “civic virtue, altruism, and good neighborliness.” Or, in other words, our level of civilization. Among these good neighbors, Mormons are unusually charitable, giving “their means and time, both in religious and nonreligious causes” (p. 452).
·         Mormons receive a surprising amount of disapproval from other faiths (which showed up during Mitt Romney’s presidential campaigns), but Mormons tend to be friendly and accepting of other faiths. They even believe that people who live their own other faith have a good chance of getting to heaven.
That’s a lot of pro-civilization there, according to the data. I’m pleased to see that. It coincides with my own world experience. One of the book’s general religious findings is this:
·         Religious Americans are better neighbors than secular Americans—more generous with their time and treasure, even for secular causes.
I’m especially pleased with the evidence that religious people increase civilization—which is what we expect from our very definition of civilization. But we live in mixed times. This past Sunday in Sunday School we talked about the cycle that shows up in the Bible. The people are in captivity. They humble themselves and turn to God. They get delivered. They prosper in freedom. They become prideful. They weaken and return to captivity.
We can see every stage of the cycle, if we look around just a little. But as a trend point, I’d say we are beyond the prospering in freedom, into weakening because of pride, and suffering increased captivity. [I read a story today showing the captivity evidence. A woman was fined because of a misunderstood Facebook post.]
I don’t want us to be stuck at this point.
As far as I have control, I can personally live in humility before God, asking for relief from captivity and for prosperity in freedom—and I can stay there by remaining humbly obedient to God’s principles. In my personal life, I never have to follow the cycle. But there are limits to what I can make of the larger world around me. I can say, simply and directly, that choosing to live the principles that lead to civilization make for a happier life. With enough of us doing that, we expand the extent of our civilization.
I came upon related article in my latest alumni magazine. As you’d expect, the two most ethical business schools show up in religious universities. Businessweek rates Notre Dame as number one, and BYU’s Marriott School of Business as number two. BYU Magazine has a long piece on ethical dilemmas. Professors Bradley Agle and Bill O'Rourke have gathered and categorized dilemmas into 13 categories. Among those discussed in the piece are:
·         Conflict of Interest
·         Unethical Request from an Authority Figure
·         Sacrifice of Personal Values
·         You Made a Promise, and the World Changes
·         Intervention—or Turning a Blind Eye
They take real-life examples, discuss the appropriate questions to ask, and suggest what each of the authors would do. This is some deep thinking, and not easy. But the purpose is not to find just an acceptable response—because any response can be justified somehow. It’s about finding the best response. As Agle puts it, the answer to a conflict of interest, for example, isn’t whether you can come up with an ethical justification for what you are doing. “Because in most cases, you can.” So the question should be, is your behavior above potential reproach?
An example in the “unethical request” category was about a cancer-causing carcinogen found near an Alcoa plant. The carcinogen couldn’t be traced to the plant. The legal response could easily be to do nothing. But O’Rourke asked the question, “What would the best company in the world do?” Alcoa took that and made the decision to deliver bottled water to everyone in the community, and to install filters.
O’Rourke asks the question, “Is there honor in business? I think so.” In fact, there are questions of honor in every aspect of life, and business is just a big part of that.
Agle sees his career, as an ethicist, as living his religious values, and helping others live them: “If we are truly living our values, we should be more of a light on the hill than we are in the business world.” He adds, “I get paid to figure out, what does it mean to follow Christ? In my particular area, I focus on how you do that in a career….If you come right down to it, that’s what this life is about: it’s ethics.”
Growing and expanding civilization, helping people thrive is a simple matter of a critical mass of people choosing to live righteously according to God’s rules. In reality, what is simple is not always easy.
I love the basic principle that more of us living religious lives is good for civilization; that is true. But I also love how these ethicists are about even more. They're about how those of us already in that camp can refine our efforts, can be better at figuring out what is right to do in situations where the difference between right and wrong, and even between good, better, and best options are not as obvious. The more each of us lives better, the better off all of us are.
___________________________________
* Title comes from St. Paul's words in 1 Timothy 4:12, "...be thou an example of the believers, in word, in conversation, in charity, in spirit, in faith, in purity."

Posted by Spherical Model at 2:57 PM