Human beings can be a complex combination of good and bad. With that in mind, I want to take a brief look at the life of Nelson Mandela, following his death December , 2013.


He is known as the father of post-apartheid South Africa. This must mean that he was a great influence for good.
My real time memories of him are sketchy.  The 27 years he spent in prison ended when I was an adult, and his time as president of South Africa was something I certainly remember; that election was 1994. But I didn’t pay a huge amount of attention to what was happening on the other side of the world. I was aware that many people refused to do business with South Africa during the last years of Apartheid, in an effort to pressure for change, which eventually worked. 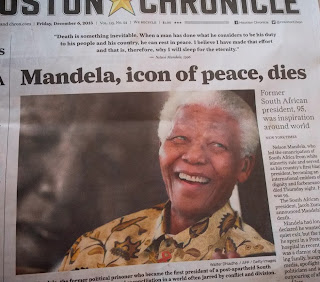 Mandela’s tribal Xhosa name was “Madiba,” which he was often called with affection. He was born in 1918, about a month after my own father, so that gives me a view of his lifespan. Some of what I know of him is through media. I especially liked the movie Invictus, a rugby movie that was really about bringing people together. Morgan Freeman played President Mandela, and the photo on the cover of Friday’s Houston Chronicle looked surprisingly like the actor. I love the smile. It’s understandable why many people would have affectionate memories for that face and the apartheid-ending legacy.
I do recall bad media of his second wife, Winnie Mandela, during the latter years of his imprisonment, I think. She was known to beat and berate her personal servants. Looking at media now, I’m uncertain what to believe. But there are some other details about Mandela that are historic and worth considering. (The Wikipedia article, already updated since his death, is useful.)
He spent many years working as a lawyer, speaking for rights for black South Africans, as a leader in the ANC (African National Congress, an anti-imperialist pro-independence movement). He grew up Christian, was baptized a Methodist, and attended throughout his childhood, even though this was mixed with tribal practices; his mother was the third of four polygamist wives, in the royal tribal family. Mandela was among the royal family of his tribe, yet the first of his family to attend school.
While he was interested in Soviet support for wars of independence, he didn’t trust the idea of communism. And through WWII he supported British rule. So he was a skeptical communist. He seemed to favor the non-communist idea of freedom to vote for all citizens as paramount, but willingly accepted socialism as a way to rule.
Early on he was a follower of Ghandi’s nonviolent resistance, more for pragmatic than ideological reasons. Later he came to believe the ANC had “no alternative to armed and violent resistance.” At trial he pleaded guilty to 156 counts of public violence and terrorism. I don’t know how specifically guilty he was personally for murders that took place, but there are claims that he, as ANC leader, was behind multiple bombing plots in which women and children were killed.
He could be compared to Yasser Arafat of Hamas, a terrorist leader of a terrorist organization, who later became a “respectable” leader of a people. But I was aware enough of Arafat to never see him as other than a terrorist. I don’t know how much of Mandela’s reputation is media created, but he wasn’t—as was Ghandi—a political prisoner; he was imprisoned for crimes he admitted committing, which was why Amnesty International refused to advocate for him.
The outcome of overcoming the suppression of a people based on race is an important positive outcome.  There is no overstating that. I have no patience for tearing down a person because of disagreement over race. But that is not the only issue of his life, so I’m trying to see the full picture.
His other efforts, using socialist means to “fight poverty,” are all statist tyranny tactics. He worked for income redistribution, using the typical socialist approaches, apparently unaware that these tactics never create wealth but only prevent wealth creation by the “haves.” Granted, there was a lack of basic needs, like water and electricity, suffered by the black poor but not the white wealthy. So, without the thinking of American freedom, it’s unfortunate but not unlikely for socialism to appear persuasive. Socially, he was pro-abortion. He codified pro-sexual promiscuity into the constitution—in a country suffering from the devastation of AIDS (one f his sons died of AIDS).
Personally, he was known to be friendly, relaxed in the company of everyone, and humble—even making his own bed while president. Promiscuity, combined with the strain of political strife, ended his first two of three marriages. Still, he is reported to have enjoyed his private family time.
South Africa is much better off today than during apartheid. But think how much better off the people would be if their great leader had used his influence to lead the people to guarantees of God-given rights, free market economics, and the pro-religion and pro-family principles necessary for thriving civilization.
The title “southern hemisphere hero” does not refer to the location on the globe of South Africa; it refers to the southern hemisphere on the Spherical Model. North is freedom; south is tyranny. So much of world history has taken place in the southern hemisphere, where people believe the choices are between anarchic tyranny and statist tyranny. But there is an entire northern hemisphere of freedom they’re missing.
The decision to allow all people a vote was a movement northward. It might be that Mandela accomplished all he could, as a single individual, in a difficult time and place, without the right beliefs. And not every “hero” has as much moral integrity as Ghandi or George Washington. But I believe the struggles his country still suffers could be solved by significant movement northward on the sphere.
So this remarkable man is to be honored, but with limits.
Posted by Spherical Model at 11:27 AM