Labor Day, the day we don’t work. Hmm. The history (Wikipedia and Department of Labor) shows the intent to be honoring workers and tradesmen, and their valuable contributions to society, which seems worthy enough, even though we don’t have corollary doctors’ days, politicians’ days, or musicians’ days. Labor Day is a product of the labor movement; i.e., labor unions, which makes me less enthusiastic about it.


Instead of a day to bring attention to workers through parades and civic events, it is now a day for shopping, family barbecues, and marking the end of summer—and in fashion the end of wearing white shoes until Easter. We don’t actually learn much about workers on this day. Nor do we give a holiday to many lower skilled workers—food service, retail, theme parks, movie theaters, etc. So, as a holiday, it lacks meaning. But we enjoy the day off.
When I was growing up, we never started school until after Labor Day. That’s still true some places. (Daughter Social Sphere starts her college semester tomorrow.) But here in Texas, many public schools started last week. So this is a chance to regroup, gather supplies, and breathe one more time before diving in to daily routine unbroken from now until Thanksgiving. (The year we moved to Texas, school started August 11th, which was particularly painful because we’d left a district that hadn’t ended until two weeks into June. It took until just a few years ago to push Texas schools later into August, long past the years we were using them.)
I thought, in the spirit of the day, it might be worth looking at the concept of labor, which is a positive thing. 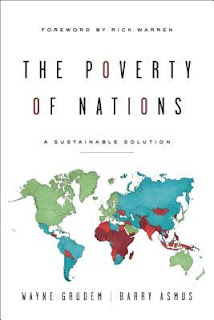 I’m about halfway through a book called Poverty of Nations: A Sustainable Solution, by theologian Wayne Grudem and economist Barry Asmus. It’s an economics book, for general readers, with an emphasis on what systems and policies can get a nation from poverty toward prosperity. (Hint: natural resources and receipt of nation-to-nation aid don’t bring people out of poverty.) And it uses a Biblical approach; it looks at particular ideas and their known outcomes, and compares them to what the Bible says. It turns out, a free market is the most moral, and the most likely to both require and encourage moral behavior in citizens. Property rights (thou shalt not steal), honesty and keeping contracts (thou shalt not lie/bear false witness), and respect for life and liberty all directly contribute to prosperity.
I first heard of this book when the author was being interviewed on the Hugh Hewitt show (August 19, but you might need a membership to listen to the archive. Hewitt plans a week-by-week look at each chapter of the book starting, I think, this week). The connection between freedom, free enterprise, and civilization sounded very much in line with Spherical Model concepts.
They talked about the idea of “earned success.” I hadn’t heard that exact phrase before, but it struck me as true. I found the phrase in the book (on my Kindle, so no page numbers, but at location 3790), where he quotes Albert Brooks: “The secret to human flourishing is not money but earned success in life.”[1]
Brooks studies what makes people happy, or satisfied with life. There are other life factors as well, relating mostly to living the laws of civilization, emphasizing family and religion, but the economic factor contributing best to human happiness is earned success, which Brooks defines as “the ability to create value honestly—not by winning the lottery, not by inheriting a fortune, not by picking up a welfare check. It doesn’t even mean making money itself. Earned success is the creation of value in our lives or in the lives of others.”[2] I’d like to add that stay-at-home mothers earn success without a paycheck.
On a national scale, rather than promoting redistribution of wealth, governments would do their people a financial favor if they encouraged earned success. One policy Grudem talks about is micro-capitalization. I’ve been intrigued by this concept for a few years. LDS Humanitarian Services started using this practice after the Christmas tsunami in Indonesia in 2004, which was the first I’d heard of it. They would interview the survivors about what they needed. Beyond the immediate offerings of food, clothing and shelter Humanitarian Services was known for supplying in the wake of disasters around the world, the survivors needed a way to replace some of what they’d lost, to get back on their feet and self-sustaining. Sometimes the aid provided a sewing machine or two, plus enough for a few starting supplies of fabric and thread. Sometimes it was a fishing boat, or even just a new sail.
The book Influencer (by Patterson, Grenny, Maxfield, McMillan, and Switzler of VitalSmarts) talks about the process of combining microloans with a small group council, to improve the success of fledgling businesses. They use as an example a small village in central India, where a group of housewives meet to discuss ways they can individual develop very small businesses, such as starting an egg business.[3]
Grudem suggests that organizations, or perhaps wealthy individuals looking to invest capital, make the microloans, rather than governments. And he encourages slightly larger investments as well:
While many organizations have promoted microloans (typically under $250) to start one-person businesses, we are also aware of encouraging cases in which Christians have decided to invest in for-profit businesses in the “small and medium enterprise” (SME) range, where $25,000 to $1 million is required to start a business. Such businesses are crucial for larger economic growth in poor nations, but they are more difficult to launch due to high start-up and due-diligence costs, and the challenge of providing a reasonable risk/return model for investors.
Foreign aid, or government aid, that does not encourage independence, or earned success, binds people in poverty.
Sometimes there’s an immediate need to give a man a fish. But that is never a long-term solution to his hunger. You teach a man to fish, and he has the skill to take care of himself. But maybe he also needs the means to make or otherwise get hold of a fishing pole or net or boat.
Following up each concept, Grudem gives a follow-up of the concept in scripture. One detail he brought out, that I guess I needed reminding of, because I hadn’t really noticed it, was that Adam and Eve were commanded to work in the Garden of Eden, to till and tend it, to be stewards over the earth. After the fall, out in the cold cruel world, work started having more challenges—heat, drought, insects. So work came to require more sweat to get from subsistence to creative, innovative earned success. But doing work is important to human beings, no matter how many basic needs are met.
Human creativity—our work— is part of our purpose and happiness on earth. Labor on, and be good at what you do. It pleases God, and will please your soul as well. We want that for everyone.