Libertarians on the Sphere

I’ve noticed something of a name-calling rift recently between people who are really pretty close to agreement: general conservatives and libertarians. It seems more worthwhile to work on repair there than on the huge chasm between conservatives and tyrannists (liberals/progressives/statists).


Let’s start with definitions, because that might provide some stitches to the wound right there.
·        Conservatives believe in conserving and protecting the natural God-given rights, and believe the US Constitution, as written and understood at the time of the founding, is well-suited to provide those protections.
·        Conservatives believe the person best suited to deciding how wealth should be spent is the person who earned it. While there will be inevitable inequities and poor, free-choice charity is better than statist coercion to see to people’s needs. (I think this is also a pretty good statement of libertarian belief.)
·        Conservatives believe in supporting the values and institutions that have led to civilization in the past, and are necessary for civilization: a religious people (because God granted the rights we enjoy), who live basic rules of decency, such as the Ten Commandments, in order to live in harmony with others; and support of strong traditional families (married mother and father raising their own children) so that the necessary values of civilization will be passed from one generation to the next.


·        Libertarians believe that all decisions about how a life should be lived should be decided by the individual, as long as the person’s behavior doesn’t interfere with or harm others.
I should be able to come up with more that this single principle for libertarianism, but, as often happens, it’s difficult from the outside. I am a conservative. While I enjoy conversations with libertarians and find a great deal of common ground, I don’t find their single principle philosophy sufficient.
A couple of days ago I read a long piece (linked at The Imaginative Conservative, by Nathan Schlueter, associate professor of philosophy at Hillsdale College) listing several basic libertarian statements, and then carefully debunking them from the conservative position. It is worth reading. Here are a few of the statements it deals with:
·        Only individuals exist; therefore there is no such thing as a “common good.”
·        The only purpose for which power can be rightfully exercised over any member of a civilized community, against his will, is to prevent harm to others.
·        Virtue cannot be coerced; therefore government should not legislate morality.
·        The only alternative to libertarianism is totalitarianism.
I like the response to the question of the purpose of law, because all law identifies what society views as appropriate or not:
The law, both by prohibition and by silence, is a powerful signal of acceptable behavior, and thus a powerful influence on character. When the behavior in question involves moral norms that are consequential for the rest of society, it is a proper object of law.
You can’t have civilization, which requires strongly supporting the family, if you have no way of disapproving of sex for sale, for example. You can’t protect personal freedom if you have no way of disapproving of the sale of mind-altering addictive drugs, which result in loss of personal choice and lead to harm of the individual and often to a fair amount of collateral damage.
Back in May 2011 I wrote about why I’m not quite a libertarian. And I described it in relation to the Spherical Model. Libertarians often coincide with conservatives, because it is so often the case that the appropriate level of interest is the most local: individual and family. (Libertarians might or might not include family as qualifying in their philosophy.) So often the problems with government and society are caused by usurpation by an entity too far removed from the most local interest.
But it’s the assumption that the dichotomy is between libertarianism and totalitarianism that causes problems. It shows that libertarians, even when their behavior and outcome put them in the freedom zone, get there sort of accidentally. Like tyrannists, they can only visualize the southern hemisphere. They don’t even know that there’s a freedom zone up there in the northern hemisphere. 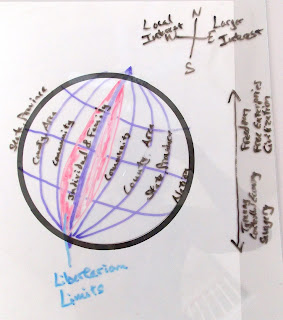 I haven’t shown this visually on the sphere before, so I’m giving that a try today with my whiteboard (where is a computer graphic designer when you need one?) The drawing is the basic Spherical Model. Southward is toward tyranny, controlled economy, and savagery; northward is toward freedom, free enterprise, and civilization. North is good; south is bad. But longitude depends on the appropriate level of interest. The range is from individual/family (most local) on the most westward side of the globe, moving (either left or right) to the other side of the sphere with world interests as the far eastward extreme (not visible on this diagram, because we can only see a hemisphere at a time). The range spreads out from individual/family, to community, to county or area, to state or province, to nation, to continent or region, to world.
In principle, according to the Spherical Model, the most local interest that can handle an issue should handle it. Since this often means individual and family, there’s a natural agreement with libertarians. Libertarians, philosophically (but not practically, if you actually talk it out) don’t believe in the value of any affiliation beyond the individual. So they don’t really value community, state, or national governments—even though they do concede that there needs to be law to protect people from those who would do them harm.
In the diagram, there’s a narrow range (in red) at or around the individual longitude line, going all the way from the north pole to the south. In the northern hemisphere, conservatives spend a lot of time in that same zone, pulling always more local, since there has been so much usurpation by less local entities. But for conservatives, the goal is to remain upward in the freedom/free-enterprise/civilization zone—whether or not that requires only family control, or whether the state or nation is the most appropriate placement (for border security, for example). While it’s hard to come up with interests beyond the purview of the nation, and even more unlikely to see the need for an international entity with power beyond suggestion, conservatives do embrace the entire freedom zone.
Libertarians, meanwhile, limit their vision to that long, narrow strip of the sphere, and only enjoy true freedom, prosperity, and civilization when they happen to coincide with conservatives on specific issues—often the economic issues. But it tends to be on the issues of civilization where the rift appears. They may be right that people can’t be coerced to be virtuous, but the law does serve the purpose of providing expectations, so even the naturally unvirtuous have an incentive to behave virtuously. Then the virtuous-by-choice are not forced to live in—and accept as normal—an uncivilized society.
The debate is valuable. Many conservatives don’t well articulate the principles of conservatism either, or even recognize the underlying philosophy. It strengthens us all to be able to talk through our views, and find the areas of agreement—and maybe persuade libertarian individuals to add conservative principles to their too-limited worldview. With a lot of well-meaning, thinking people who value freedom, we can gain strength together.
Posted by Spherical Model at 6:00 AM