I love Disney, and I love fairy tales. Put them together, and I’m as happy as my granddaughter when she talks us into watching—one more time—whichever princess video is her current favorite.


But have you noticed that there’s a pattern of missing mothers?


·        Snow White: her mother has died (from childbirth?), so she faces the evils of a jealous stepmother. Where is her father, the king? Not helping rescue her from scrubbing floors.
·        Cinderella: her mother has died (cause and timing unknown), so she faces the evils of a jealous stepmother, pushing forward her own unpleasant daughters. Where is her father? In some versions, he’s just incompetently unaware; in others (the Disney version), he has also died before the story begins.
·        Aurora (Sleeping Beauty): technically she has both parents, but she is separated from them at birth, for her own protection, raised by a trio of good fairies, until she’s old enough to have outlasted the dangerous curse following her 16th birthday.
·        Ariel (the Little Mermaid): her mother has died (cause and timing unknown), and she defies her father, who can manage the entire underwater world except for this headstrong daughter.
·        Belle (of Beauty and the Beast): her mother has died (cause and timing unknown), and she has mostly raised herself, because her loving father is preoccupied with his inventions.
·        Pocahontas: her mother has died (cause and timing unknown), and she is subject to her father, the chief, who is loving, but not listening.
·        Jasmine (from Alladin): her mother has died (cause and timing unknown), and she is raised by a loving but ineffectual father, who becomes subject to the evil influence of the Vizier.
·        Mulan—a rare exception, who has both parents, both loving. She doesn’t, however, emulate her mother, but goes to war as a man, to act in her father’s place.
·        Tiana (the Frog Princess)—another rare exception, but her father has died. She doesn’t emulate her mother, but strives to fulfill her father’s dream.
·        Rapunzel—her parents are alive, but she was kidnapped in infancy by an evil witch who poses as her mother, with more scary guilt-inducing manipulation than just about any arch nemesis. She’s probably going to need therapy after reuniting with her real, loving parents.
Is there a conspiracy? Not exactly. It is understood that fiction needs opposition for the main character to face and get through. Lack of a mother is sufficiently trying that, getting along without a mother and turning out OK declares character strength in itself.
What would be good to see in literature would be a daughter growing up with two healthy parents, influencing her appropriately, so she can face odds with something better than either the lucky timing of a rescuing prince or having to act like the rescuing prince herself.
And, speaking of princesses, I want to add a couple of other thoughts. At last week’s book club, we discussed The Goose Girl, by Shannon Hale. It was a re-read for me; I read the whole Books of Bayern series when there were only three (just learned I’m missing one). In this story, the princess is sent to marry the prince in a larger nearby kingdom, to ensure peace. Her lady-in-waiting and some henchmen decide to do away with her and substitute for the sake of their own power hunger. She escapes and hides out, becoming a keeper of the royal geese in the kingdom of Bayern. She learns and grows her own abilities and talents (which include some magic, this being a fairy tale). Much good is done because she lives as a commoner and comes to understand their needs and desires. 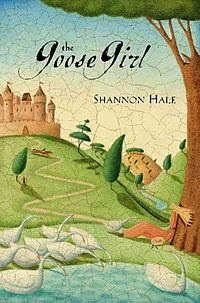 While I was at the library getting a copy of that book, I also picked up Princess Academy, Palace of Stone, the sequel to Princess Academy. The princess in this series is only a supporting character. The main character is a (motherless) young girl named Miri, who is learning all she can and discovering singular ways to help her people. In this second book, she and friends are spending a year living at the palace and learning according to their various interests.
There is a fair amount of tyrannical confiscatory taxation going on in the kingdom, as well lack of freedom of speech, lack of representation, and other things common in monarchical tyrannies. People are on the verge of revolution. Miri likes the ideas of changes that will help her people, but she also comes to recognize how rebellion is likely to affect her friend, the princess, and others. She seeks a way to persuade people without violence—doing surprisingly well for a teenage girl raised in the hinterlands. Again, there’s a bit of magic involved; it’s a fairy tale. I enjoyed the story, quite a lot, as a light summer read. But, while it shows that character matters for all individuals, it doesn’t quite leave the princess dream for the American Dream.
I think we tell our girls they are princesses, because we mean they are special, and valued, and we treasure them. But we don’t mean to be telling them, “You’re born better than everyone else, so feel free to be petulant and selfish and look down on others.” We never admire princesses (or anyone) with those characteristics. Not even in books.
We’re Americans; we believe everyone is equal before the law. No one is given special treatment because of aristocratic birthright. And we can move from class to class based on effort, learning, and other measures of success and character. It is not enough to sympathize with those beneath us. We need to know that, in God’s eyes, everyone is His child—greater than any princess, in truth. What we need to do is live up to that birthright, and teach our daughters who they are and who they can grow to be.
I’d like to see a story, as entertaining and readable as any fairy tale, that shows the love of God through the example of loving parents in an intact family—a rare story in literature. And I’d like the egalitarian princess to come to value her God-given individuality, not the luck of birth or outward beauty, or the replacement of feminine gifts with male behavior instead.
Posted by Spherical Model at 1:03 PM