On Friday we looked at some of the data about how states have historically voted since 1960. Today we’re going to dig a little deeper to see if this data can tell us anything about this year. For your review, I'm including the (almost too small to read) charts again. 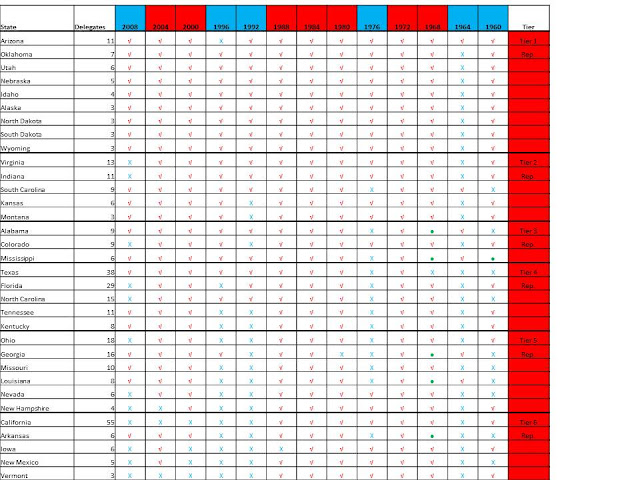 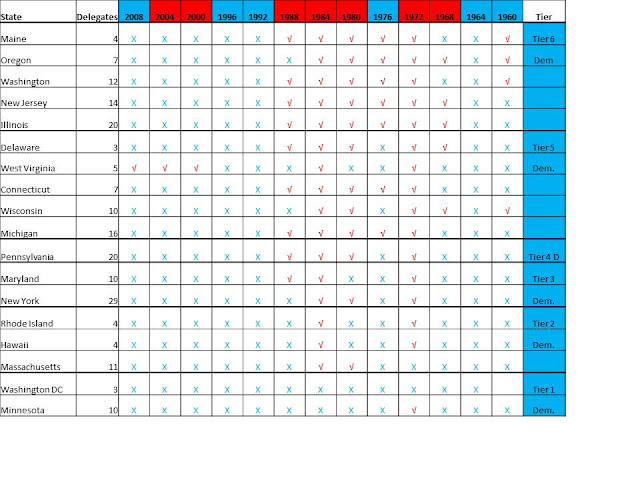 First let’s take a look at Tier 1 Republican states: Arizona, Oklahoma, Utah, Nebraska, Idaho, Alaska, North Dakota, South Dakota, and Wyoming. Of these, all but Arizona have voted for the Republican presidential candidate every election except 1964. Arizona voted GOP that year, but Democrat in 1996 only. So what was going on in 1964? That was Barry Goldwater against LBJ. Goldwater only took six states. Arizona was his home state; the others were Alabama, Mississippi, Georgia, Louisiana, and South Carolina. The first four of those states were also outliers in the 1968 election, voting for the third party segregationist candidate. In other words, it was not likely Goldwater’s conservatism that appealed, but his racism. The Tier 1 Republican states probably didn’t vote in favor of LBJ’s liberal policies so much as they voted against Goldwater’s unsavory policies; none of the Tier 1 states ever had slaves or particular race issues.
George Romney, Mitt’s father, ran (among others, including Nixon) against Goldwater in 1968. People today like to characterize that as the moderate candidate vs. the conservative. While there were a number of conservative positions put forward by Goldwater that have since become basic doctrine, back in the 1960s, the matchup was more likely to be seen as sane vs. insane. Think, for comparison, of Ron Paul’s anti-Israel foreign policy—with vitriol.
All of the Tier 1 states voted against Obama in 2008, so it’s likely we can count on that position again. Of Tier 2 Republican states, Virginia and Indiana are the outliers. They voted Democrat in 1964 (the same year the Tier 1 states voted Democrat) and again in 2008. The “historic” opportunity to vote for the first black president, especially with the alternative being a weak conservative, probably caught them; now that the results of that mistake are clear, they are not at all likely to go Democrat again this time.
There were 22 states that voted against Obama in 2008; it is practically guaranteed that all 22 will vote against him again. So the question is, really, which of the ones suckered in to that “historic” thing now know better?
Colorado has gone Democrat only in 1964 (the outlier Goldwater year), 1992 (Clinton’s first, but not his second race, when 3rd party Perot was a factor against the GOP), and 2008. Since the Obama error is considerably worse than the Clinton error, logic would say they will go against Obama in 2012. No guarantee, but that is a possible 9 electoral votes.
Then we’re down to Florida and North Carolina. Florida went Democrat in 1964 (Goldwater again), 1976 (against Reagan, but they are adjacent to Carter’s Georgia), 1996 (Clinton’s 2nd term, another 3rd party Perot interference), and 2008. Floridians voted for Bush narrowly both times. So they’re questionable. As my son Political Sphere points out, Florida has people who couldn’t read a ballot, and then tried to overturn an election by looking at “pregnant chads.” Having our future depend on them makes us feel vulnerable. But the state, with 29 electoral votes, is definitely worth fighting for. They have been voting regularly for GOP governors for quite a while, so that is a positive.
North Carolina went Democrat only in 1960, 1964, and 1976. Up until 2008, they went GOP seven straight times. Let’s hope it was just the “historic” problem, and they will self-correct, for another 15 electoral votes.
In the top 4 tiers, the only real question is Florida. If we assume the scenario that the GOP gets all of the top 4 tiers, as we showed in the last post, that’s 212 electoral votes.
In lower tiers, the GOP will also get Georgia, Missouri, Louisiana, Arkansas, and West Virginia—all of whom voted against Obama in 2008 when we didn’t know how bad he would be. That is another 45 electoral votes, putting the GOP candidate at 257. Another 13 electoral votes means a win.
Of the remaining states, let’s look at those who voted GOP recently before 2008:
·         Ohio                            GOP in 2000 and 2004             18 electoral votes
·         Nevada                        GOP in 2000 and 2004               6 electoral votes
·         New Hampshire            GOP in 2000                             4 electoral votes
·         Iowa                            GOP in 2004                              6 electoral votes
·         New Mexico                 GOP in 2004                              5 electoral votes
Ohio alone could do the job, or any other three. Plus there is the possibility that any historically blue state might notice the abysmal result of the Obama vote. Almost any loss could mean defeat for Obama.
This assessment is based mainly on history. There is no guarantee that demographics have stayed the same. For example, Texas voted Democrat four of five times from 1960-1976, but has voted GOP in every presidential election since. Some migration has happened with people leaving high unemployment places to places with more opportunity. The better opportunity places tend to be conservative, places that resist big government interference.
National polls show two conflicting things: low and sinking approval ratings for Obama (despite the mainstream media as his propagandists), and slight leads for Obama against specific GOP opponents. But the polls don’t say who was polled. A fair poll would be numbers that relate to registered GOP and Democrat voters, and should be likely voters. Polls tend to be canvass more Democrats than Republicans, and not necessarily those who vote. So polls tend to be skewed against Republicans. Also, the national polls do not show where the voters are. If there is a preponderance in urban areas and blue states, the poll is skewed against Republicans in a way that is particularly inaccurate in relation to the electoral college.
The point is that, ten months out from voting day without a chosen Republican candidate, there is quite a lot of reason for us to hope for change, so we can get our country back.
Posted by Spherical Model at 1:16 PM