The Fall 2011 issue of The Intercollegiate Review arrived recently, so I’ve begun wading through during some odd hours. These articles are always mind-bending, sometimes making my head hurt for hard work. But often I glean something valuable. 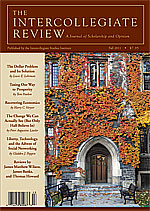 I just read the article, “The Change We Can Actually See (But Only Half Believe In)” by Peter Augustine Lawler. He philosophically compares the free individual ideas of both Locke and Tocqueville, in contrast to each other and to Marxist progressivism. I know Locke and Tocqueville only superficially. Our founders studied Locke. Alexis de Tocqueville wrote Democracy in America, following his visit here around 1830, examining the new freedom experiment that was the . So when Lawler starts talking about Lockean ideas, my understanding is limited.
What I do glean from this is that, when we combine our belief in individual political and economic freedom, we must do so in conjunction with voluntary, moral, mainly family social connection. That is what I have been saying at the Spherical Model.
Here are a few samples:
Individualism and the Birth Dearth
He [Tocqueville] thought that the natural limit to individualistic self-absorption would be the family: even in a democracy, free individuals would persist in thinking of themselves as parents and children. He had a kind of sociobiological faith that the limit to individual liberation would be the natural social inclinations that lead the species to perpetuate itself. Locke seems to have had that faith too. He thought people would continue to have children, and their natural inclination, supported by law, would cause them to stay together long enough to raise them (p. 32).
The Entitlement Implosion
The primary experience of most ordinary Americans these days is the erosion—with the prospect of implosion—of the various safety nets of our relatively minimalist welfare state. The change we can actually see has been, and will continue to be, from defined benefits to defined contributions. Private and even public pensions are done for. They will continue to be replaced by 401(k)s. That kind of change will also be true of health care, as employer-based plans become unsustainable. It will also soon be true of Medicare and probably Social Security—if not quite as soon as Representative Paul Ryan thinks. Ryan, it is already obvious, will come to be known as a man just slightly ahead of his time. In that sense, just as obviously, he is the real progressive—the prophet of the more or less inevitable world to come. And his opponents, who are called Progressives, are just as obviously the real reactionaries.
The good news here, the new birth of Freedom celebrated by the Tea Party, is more choice—a lot more choice—for individuals. The bad news is that risk is being transferred from the employer and the government to the individual….
There really is a lot of good to be said about a renewed emphasis on individual responsibility, just as there is a lot of good to be said about perfecting the productive meritocracy that is the main source of our prosperity. Perhaps there will also be a new birth of voluntary associations—such as the extended family, the church, and the neighborhood—and voluntary caregiving for the social support even free individuals need to live well (pp. 35-36).
The Change We Can Actually See
People are, it turns out, stuck with working. And the demands of productivity actually accelerate as technology progresses. They are also in some ways more future-obsessed than ever. Free individuals tend to believe that their own deaths are the extinction of being itself, but as Lockeans we are less whiny-existentialist and fatalistic about that than we are powerfully resolved to do what we can to stay around as long as possible. (We can exempt our religious minority of observant believers from this view of who we are, just as we can notice that they are actually the ones who are mitigating our birth dearth with their many babies. It is always possible that there could be a religious solution to the crisis of our time.)
Our libertarians were wrong, however, to think that we could flourish in abundance by understanding ourselves with ever-more-perfect consistency as free and productive individuals progressively untethered by biological direction. It turns out that it is not free individuals but men and women in touch, so to speak, with who they are by nature who have enough babies to secure our productive future and so to pay for our minimalist entitlement programs….
The next stage in American progress, we can hope, is that we will discover, or rediscover, the truth that the free or personal being is necessarily a relational being (p. 38).
As I’ve said, we want political and economic freedom as a goal, but to have civilization as an outcome, we need a religious people, who honor God as the source of their rights, and who recognize and honor family as the basic unit of society.
Posted by Spherical Model at 11:52 AM