I didn’t get around to discussing book club last week. My little group read and discussed Princess: A True Story of Life Behind the Veil in Saudi Arabia, by Jean Sasson, © 1992. Sasson tells the life story of a princess whose pseudonym is Sultana, a granddaughter of the first King Sa’ud of . The story is fictionalized and changed in places to protect the identities of the women. 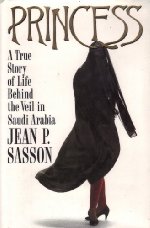 Most of the book, and most of our discussion, concerned the oppression of women in Saudi Arabian culture. But that is the subject for another day. There is one happy part, shortly after Sultana’s marriage to a man who seems, at least at that point, less oppressive than she might have gotten stuck with. They spend some time in , and she makes some observations about the freedom contrast she sees there.
In , after weeks of meeting transported Americans from practically every state in the , I announced to Kareem that I like these strange, loud people, the Americans. When he asked me why, I had difficulty in voicing what I felt in my heart. I finally said, “I believe this marvelous mixture of cultures has brought civilization closer to reality than in any other culture in history.” I was certain Kareem did not understand what I meant and I tried to explain. “So few countries manage complete freedom for all their citizens without chaos; this has been accomplished in this huge land. It appears impossible for large numbers of people to stay on a course of freedom for all when so many options are available. Just imagine what would happen in the Arab world; a country the size of would have a war a minute, with each man certain he had the only correct answer for the good of all! In our lands, men look no farther than their own noses for a solution. Here, it is different” (p. 147-148).
Sultana voices the common belief that the two alternatives are control or chaos. A culture thrives or not depending on how well the ruling powers allow just enough freedom to get good results without allowing so much that there is chaos.
In Spherical Model language, this view is totally southern hemisphere—some form of tyranny, the choice between governmental control and the control of strong over weak that happens in anarchy. People fear anarchy, so they allow themselves to be controlled by a state authority.
But in America Sultana observes an alternative possibility. Culturally we have more freedom, because we reject tyranny and move northward toward the freedom zone. Instead of ceding power over our lives to a statist government, or sinking into gangs and “organized” crime, we believe our freedoms are granted by God, not government. So when a government assumes those powers, it is usurping the rights of man granted by God. We naturally resist the oppression. We also recognize that avoiding chaos means governing ourselves—living honestly, and respecting the rights and opinions of others, as we expect them to respect ours. Consistent application of minimalist law leads to ordered freedom without coercion by an arbitrary ruler.
We’re the longest-running such experiment in world history. No wonder it looks strange yet appealing to someone who never knew that possibilities out of reach of tyranny existed.
Posted by Spherical Model at 9:00 AM