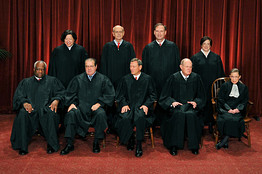 There’s good summary at the Law Blog of the Wall Street Journal.
These are the questions the Court will address:
Some years ago I was talking with a friend, who was then a constitutional law professor, about some issue that seemed simple to me; he pointed out that it took years of study and practice to obscure things as well as the court justices can do. So, being unencumbered, here is my opinion on the four points, ahead of the hearing.
The answer to the first question is yes. It would be better if we didn’t have to bring suit concerning a law enacted by our elected officials. But this one was pushed through using shady late-night, weekend, procedural technicalities to avoid succumbing to the will of the people or even the actual majority of elected officials—even during a time of complete Democrat control of both houses.
The question itself relates to whether the penalty for not buying insurance is a tax. Ahead of passing the law, Obama’s team insisted that it was a penalty, not a tax. If so, then there is no roadblock to bringing the suit. But now they are claiming it is a tax. Supposedly, if it’s a tax, then you have to wait until it is enforced before it can be shown to be subject to a lawsuit, and these particular “taxes” wouldn’t be enforced for another year or two. This is a semantic question only, twisting words to suit themselves—as the administration would do with the entire 1200 pages of words in this boondoggle.
The second question relates to the commerce clause of the US Constitution. This is Article I, Section 8, Clause 3: “To regulate Commerce with foreign Nations, and among the several States, and with the Indian Tribes.” The only difficulty is the definition of “regulate.” Over the years we have come to think of it as “make rules of control over,” but at the Constitution's writing the word meant, “to make regular, or expected.” How do you make sure international and interstate commerce can take place? Mostly get out of the way. Deal with trade agreements internationally, and make sure states don’t set up illegal embargoes against their fellow states. It’s about making sure free exchange can happen, not about controlling details of such exchanges.
Is there anything in there to imply that the federal government has an enumerated power to force a purchase by every citizen simply because that citizen has been born? No. I’d say that’s a serious overreach. If you skew the clause to mean the federal government is allowed control over any issue that can affect the economy in any way, then you have granted total power to the government over all personal choice of how one uses the results of one’s life work. That is slavery, not a limiting enumerated power at all.
The answer here, then, is yes, Congress did overreach, and the individual mandate is unconstitutional. That is how the Supreme Court must rule. The concern I have is that such a simple question of our personal freedom depends on the opinions of nine unelected individuals in black robes. If they rule correctly, great. But if they do not, that doesn’t change the fact that the law goes against the letter and spirit of the freedom-ensuring US Constitution.
The third question is another yes. There is so much infrastructure in that huge bill, most of it we’re still unaware of, that are intrusions into our lives, we need to scrap the entire thing before the damage becomes endemic. There should be nothing about student loans in there. There should be nothing about taxing home sales and purchases in there. There should be nothing in there about setting up health clinics on school campuses in an effort to subvert parental rights. There should be nothing that discourages businesses from providing health care as a benefit to employees, thus forcing more and more employees to have no other option than a socialized federal government option.
Is there any small piece of the law that might be Constitutional? Maybe. Show me. But, if so, couldn’t that particular piece be resubmitted for debate and vote as a bill on its own merits?
The fourth question is technical. It appears to me that the effects on Medicaid are negative for the truly needy. My personal view, always, is that the federal government has no business using tax money for charity. There is no enumerated power granting such power. That is not to say that we as a people should ignore those truly in need. The answer is a combination of free market and philanthropy—both of which are hindered when the government steps in the way. How we get there from where we are, I don’t know. We have to do it without abandoning those who have had promises made to them and are truly in need, but we have to get back to the Constitution.
I hope getting back to the Constitution will be the result of this hearing. It looks like arguments will be heard by sometime in March, and a decision should come down in June. This is well ahead of the election, and may have an effect either way. Whichever way the court decides, the other side will use it as an argument for recruiting votes to get things the way they want. And it will also point out the importance of having the right president at a time when additional Supreme Court justices will be chosen.
Posted by Spherical Model at 11:26 AM