The Rich Are Getting Poorer

The other evening my son Political Sphere was sharing with me Greg Mankiw's latest blog post. Mankiw is a professor of economics at Harvard; a textbook he authored is probably the most widely used for college freshman economics. He’s a free market guy, former advisor to Pres. Bush and advisor to Mitt Romney. And he has the skill of posting skillfully short blogs, with links to all the harder stuff.

Clearly the wealthy had a greater fall in income than the median (median means as many individuals earning more as earning less). But, then, the wealthy have so much more to lose, maybe they can afford it. So I asked what the percentage losses were. Political Sphere crunched the numbers and made me some charts.

This first one shows the simple amounts of loss for the different groups. 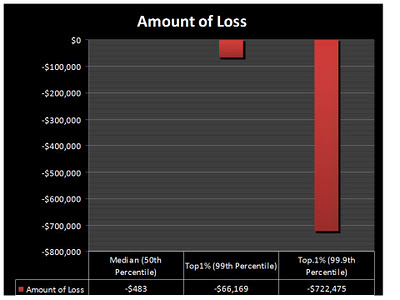 A median income earner loses the ability to make a car payment or two, or to buy a new computer, or to pay a dentist bill. It will be felt, but as long as this doesn’t continue year after year, it will probably be recoverable, and it looks like only the median earner and immediate family are affected. The overall economy might be more sluggish, but no jobs will be directly lost.

The top percentile earner loses enough to need to downsize by a couple of median employees, or sell a high end automobile. Or a mortgage payment would have to be $5500 lower per month, so a high end home would have to be sold, or would not be built at all. Even for one year, that amount has a significant impact on the top percentile, and on some lower earners as well.

As for the really high earner, the top 10th of a percentile (best earner out of a thousand), the loss is almost three quarters of a million in income per year. That means that a business will not get startup capital, or an existing business will not expand. It means 22 employees that will get laid off and not rehired until the income returns with certainty. It means a high end home will not be built, or maybe three median homes that could have been rental property. The loss to the top earner is significant, and a sizable number of lower and median earners will be affected.


This second chart shows the percentage of loss to each of the groups. 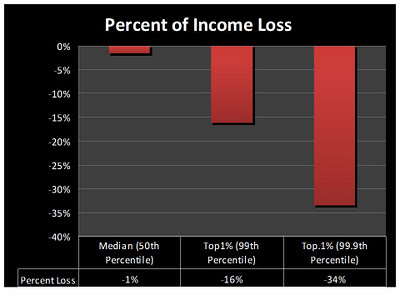 If you’re into class warfare, maybe seeing the rich get poorer makes you smile. But if you’re into a healthy economy, you’ll see that this isn’t about leveling the playing field; it’s about lowering the standard of living overall. More wealth created by those who know how to create wealth means more wealth in the economy as a whole, which affects everyone. Less wealth means less capital, less spending, less spreading it around. Maybe there’s wisdom in the commandment, “Thou shalt not covet.”
Posted by Spherical Model at 9:00 AM