In August 2010, before I was trained as a poll watcher, I was at King Street Patriots to hear Christian Adams, a former Department of Justice lawyer. He began by showing a video of the New Black Panthers members Shabazz and another thug intimidating voters in , and then video showing New Black Panther leaders unwilling to repudiate either the behavior or the hatred, and indeed disdaining the rule of law.


A lawsuit was filed on the voter intimidation charges on election day November 2008. There was plenty of evidence against the perpetrators. There was no testimony even lined up to defend them. There was no doubt about the eventual outcome. The case was already won. Deadlines were missed. Stonewalling was taking place.
And then the Eric Holder’s (Obama’s) Department of Justice dismissed the case. Two DOJ lawyers, Michael Cord and Christian Adams, were called on by Congress to testify as to why the case was dropped. The DOJ higher ups informed them they would be breaking the law if they testified truthfully; but they could be held in contempt for refusing to testify. It was a no-win situation, which was why stepped down. 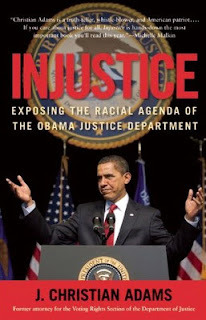 He has now written a book about the case, called Injustice: Exposing the Racist Agenda of the Obama Department of Justice (just out, so I haven’t read it yet). What is significant here is that the entire reasoning for dropping the case was the assertion by Obama’s administration that only whites can be racist; anything blacks do is fair game and will not be prosecuted. Those who wanted to believe their vote for a black president was proof was past racism were sorely mistaken. Racism is alive and well among black liberals and their supporters. Obama attended a black racist preacher’s church for twenty years, so it’s beyond believable that he’s unaware of these racist and illegal policies put in place under his watch.
There’s a good summary of the situation in Thomas Sowell’s piece here. He says,
The widespread, organized and systematic corruption of the voting process revealed by the author of “Injustice” is on a scale that can swing not only local but national elections, including the 2012 elections. The Department of Justice under Attorney General Eric Holder has not only turned a blind eye to blatant evidence of voter fraud, it has actively suppressed those U.S. Attorneys in its own ranks who have tried to stop that fraud.
On voting day 2010 I spent an hour or two at King Street Patriots headquarters before being sent to the voting place where I replaced a poll watcher who had been shoved out the door unlawfully by a voting judge (need I mention that the presiding judge was black? I’m not sure we had any problems that day except with blacks). Christian Adams, if I’m remembering right, was at KSP headquarters that day, taking calls, advising on procedure, and taking notes. I’m interested to see if any of our adventures made their way into his book. New Black Panthers indeed were in Houston that day, intimidating poll workers, poll watchers, and voters. (Not at my particular polling site; I don’t mean to say I experienced the full force of these thugs. My story is here.) And we, as a team of around 700, gathered data that could be used both for prosecution and better voting law.
While some of the voting fraud problem certainly involves racism, the evil of racism is simply a tool used by the statist power mongers. Historically both parties have had their share of voter fraud, but currently it is almost exclusively a Democrat evil. “Liberals,” (the pro-tyrannists in the southeast quadrant of the Spherical Model) use the hatred of racism, the hatred of class envy, and just about any other tool to foment chaos so that they can step in and offer security to the masses. They aren’t helping blacks or helping the poor—their policies hurt these demographics. Rather they are manipulating to increase their own power.
Walter Williams also talks about the nurturing of racism by the liberals, in his article here. He points out some telling statistics:
One might think that seeing as elected its first black president, it would usher in the end of racism; but it’s all a racist plot that’s easily uncovered simply by asking: “Who really elected Obama to the presidency?” It surely wasn’t black people. Of the 67 million votes that Obama received in the 2008 election, I doubt whether even 7 or 8 million came from blacks. That means white people put Obama in office, and that means he is beholden to white people, not black people.
You say, “Williams, that’s preposterous! What’s your evidence?” Just look at the unemployment statistics. White unemployment is 8 percent, and black unemployment is double that, at 17 percent, and in some cities, black unemployment is near 30 percent.
And then Obama goes before the Congressional Black Caucus and tells them to stop complaining. Because he can smugly assume that whatever he does, the black vote is guaranteed.
Here’s one solution: vote according to love—of freedom and the Constitution—instead of according to hate. And if you really want to put that love into action, do more than vote if you can; volunteer to make sure there are free and fair elections. (See True the Vote.)
Besides his book, you can read more from Christian Adams at Election Law Center. If you're in Houston next week, you can see him debate local NBP leader Quanell X, info here.
Posted by Spherical Model at 10:59 AM