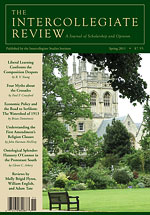 Some things I leave lying around for rereading. The Intercollegiate Review (available at ISI.org) is one of those things. At the back they book reviews, and there’s one from the Spring 2011 issue I’ve reread a couple of times (even though I still haven’t gone to get the book itself). The book being reviewed is The Uses of Pessimism: And the Danger of False Hope by Roger Scruton. The review is by Molly Brigid Flynn.


This has gotten my attention because of the idea that optimism doesn’t always lead to good things; sometimes a good dose of reality is actually more positive. The book outlines some logical fallacies that are common pitfalls of the optimist. Since yesterday we talked about the need for change in order to regain our hope, following losses caused by the hope-and-change president, I thought this might be instructive.
One of the things I’m looking at is how the “let us control your life” types are likely to fall into these pits—so maybe there’s even more reason we shouldn’t trust them. Here are the fallacies:
I like this summary: “The politics of hope often blames normal people—non-busybodies—for being selfish, for not realizing how ‘we’ must take care of all, rather than each taking care of his own.” If only those busybodies would limit themselves to giving what is their own, rather than assuming what is mine is theirs to give to whomever they deem worthy, we would all be positively better off.
Posted by Spherical Model at 10:45 AM