I clipped this quote back in the summer of 1999; it relates to today’s post.


At the dawn of time, Truth was wandering the world when she came upon a town and first saw people. Delighted, she entered the town to speak to them, but when they saw her, they ran away screaming in terror.
Dismayed and discouraged, she left the town. Soon she came across the most beautiful being she had ever seen, clothed in lovely robes of shimmering color. The being noticed how sad Truth was and asked the reason.
“When I saw the people, I was glad because I had so much to tell them” Truth said. “But when they saw me, they were afraid and ran away.”
“Well, of course, they ran away,” the being said, “for you are naken and people are greatly afraid of the naked truth. My name is Story, and I have many of these beautiful robes. Here, take one and let us go into the town together.”
When the people saw Truth clothed in the beautiful garment of Story, they greeted her warmly and asked her to stay.”
—A folk tale adapted by Tom Burger, 1999
Much of my writing these days is pretty straightforward “naked” truth. But I often think of this quote. Sometimes I use analogies to get ideas across, or personal experience. Sometimes I use literature. I often use literature for gathering truth. 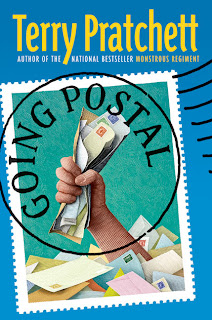 Since it’s summer, I’ve been doing some light reading. I just picked up another Terry Pratchett Discworld book. If this is something you’re unfamiliar with, you might want to take a chance for a good laugh or two. My favorite Terry Pratchett is Good Omens, the apocalypse comedy [yes, you read that right] he co-wrote with Neil Gaiman (of Stardust novel and screenplay fame). But this particular book is from Discworld (a world that is flat and sits on the back of a giant turtle, if I recall the mythos of the series), called Going Postal. Pratchett is British, and who knows what his politics are, but as for skewering politics in general and human nature in specific, he is the master.
A petty thief, Moist von Lipwig, gets hanged to within half an inch of his life (by a very skilled hangman), and then is offered the job of postmaster, as opposed to certain death. He takes the job. I am finding it necessary to carry around a stack of small sticky notes to mark things I want to remember, such as these:
There is a saying, “You can’t fool an honest man,” which is much quoted by people who make a profitable living by fooling honest men. Moist never tried it, knowingly anyway. If you did fool an honest man, he tended to complain to the local Watch, and these days they were harder to buy off. Fooling dishonest men was a lot safer and, somehow, more sporting. And, of course, there were so many more of them. You hardly had to aim….
The world was blessedly free of honest men and wonderfully full of people who believed they could tell the difference between an honest man and a crook (pp. 17-18).
As Moist settles in to the job that first day, he thinks, “What kind of man would put a known criminal in charge of a major branch of government? Apart from, say, the average voter” (p. 45).
In the book, where semi-crooks inhabit the imagination safely, I am amused. If only Pratchett’s observation were less true in our world! 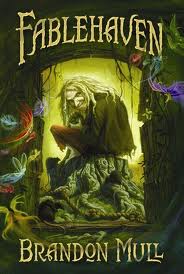 It was a book club day today, and we talked about a youth fantasy novel, the first of the Fablehaven series. I have since read book 2, and borrowed book 3 today from a book club friend—who has the whole set and promises that book 4 is the best. I expect we’ll put book 4 on our list for next year (even though I expect to finish the whole series in the next month or so).
I had hesitated to pick up this series. For one, I don’t right now have a young person in the house that the series is aimed at. Still, that was no hindrance for the Percy Jackson series (not very deep, but entertaining), and never stopped all of us from reading and re-reading The Chronicles of Narnia, The Lord of the Rings and The Hobbit, and the whole Harry Potter series.
But I hesitated with this one, because I have come up against the occasional fantasy series that bores me—and I’m not easily bored. When a series has as a theme “you should use your imagination” or, worse, “you should follow your heart,” I roll my eyes. Sometimes an author’s imagination is really worth following, but sometimes it’s just an exercise, and it’s not mine. (Neverending Story, the old movie, was like that for me—sorry to those of you who loved it. Compare that to The Wizard of Oz, where the abundant creativity is a way of showing young Dorothy that there’s no place like home—to appreciate her black and white world and the people there who love her.) There’s nothing really harmful in developing imagination, but there’s not enough exploration of truly valuable human themes either.
As for the “follow your heart” theme, note that these are usually aimed at teens. Think about it. How many teens do you know that are so Spock-like that their rational thought overrules their impulsive passions? Teens simply don’t need to be told “go with your feelings,” because that’s almost all they do. They need to be taught, “think it through; consider the consequences; wait and make a more informed decision.” So, that’s my little soapbox.
Back to Fablehaven, a rather pleasant place to spend some summer afternoons. The two young people, Kendra and her younger brother, Seth, visit their grandparents—and come to learn of the fantastical world they preserve. Adventures ensue. But among the often humorous situations, Kendra and Seth are realistic characters, with definite tendencies, but believable thought processes.
And here’s something there’s not enough of in literature for any age: everything they do has natural consequences. Even when they make mistakes that are unintentional, the consequences follow. Sometimes their grandparents are able to guide them through a process to overcome the negative consequences, but not always. They can’t just be magically bailed out at every turn. So their decisions are important.
You can see their growth as they change from irritating each other to caring ultimately for each other and even risking their lives to protect each other and their grandparents. Kendra grows in bravery. Seth grows in thoughtfulness (although I suspect his growth is going to be strung out over several books). And their natural strengths—obedience for her, daring for him—are developed as assets, while they broaden and deepen other character traits.
It was easy to care for these two young people, because they felt so real. And I appreciated the worldview of the author: family is important; choices have consequences; there is evil in the world, but there’s no reason to put it in your mind where the images will stay. Thank you, Brandon Mull. This is how is should be done.
Posted by Spherical Model at 11:31 AM