The Law and The Nine

In Chief Justice John Roberts’ confirmation hearings, during his introductory speech, he made this analogy:

Judges and justices are servants of the law, not the other way around. Judges are like umpires. Umpires don’t make the rules; they apply them.
The role of an umpire and a judge is critical. They make sure everybody plays by the rules.
But it is a limited role. Nobody ever went to a ball game to see the umpire. 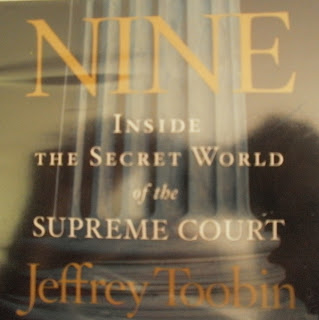 I’m about finished with The Nine, Inside the Secret World of the Supreme Court, by Jeffrey Toobin. The above quote was in a recent chapter, and I perked up and thought, “Yes, that’s what I think.” But the author is less positive. He says, basically, Roberts is naïve and wrong, because justices clearly do make law.
A book like this is quick to become a bit dated and become merely a historical viewpoint; it was published in 2007, so Sotomayor and Kagen are missing. Still, it has some good inside information. One interesting thing about this book is the fairly obvious self-view of the author as just a historian, just a reporter, without bias. Yet to a conservative, while much of what he says in The Nine is historically accurate, his bias is evident.
Of all the justices he talks about, he spends the most time on Justice Sandra Day O’Connor, covering her thought processes pretty thoroughly, and clearly admiring her special skill of finding the middle ground, her "brilliant" ability to avoid coming down on either one side or the other. He is disdainful (and quotes O’Connor as disdainful) of Scalia for being such a doctrinaire originalist. There is clearly a roll of the eyes at anyone who would consider the law to be, not a living whatever-we-say-it-is amorphous mass, but rather a written, solid, steady, unchanging expectation. As if that were so outré, so neanderthal--even though it's the basis of lawful order in the formula for civilization.
The very purpose of writing a law is to make it solid and unchanging (unless one goes through an actual process to change it). I have a friend who taught Constitutional Law and we were once discussing some chain of thought followed by the court, and I said, “But it doesn’t mean that; anybody who reads the Constitution knows it means…” (whatever the particular topic was). And he agreed and added, “It takes years of study and education to make it possible to come up with an idea that wrong.”
He also told me that, in order to be accredited, a Constitutional Law class is expected to teach case law, stare decisis (respecting precedents established by prior decisions). A law school can lose its accreditation for teaching that the Roe v. Wade decision is not the settled law of the land, even though there is a widespread view (even among pro-abortion justices) that the decision was seriously flawed in its reasoning. It is typical, even standard, for a Constitutional Law class to not even require reading of the actual Constitution, nor to look at the intended meaning of the founders known through their contemporaneous writings.
It seems to me, if the law is simply what a majority of unelected black-robed individuals say it is, that is oligarchy, a tyranny, even when a benevolent one. And I reject that, since it is not what I pledge allegiance to, nor what my flag represents.
So the question I have is, what do we do to reject erroneous court decisions? Lincoln suggested simply considering the bad decision to apply to the single case only, and have all future judgments relate to the written law. Great idea! But how do we, as a people, go about ignoring bad court decisions? Unless enough of us stand together. How do we do that? I’m still thinking about it. I’m open to nonviolent suggestions.
Posted by Spherical Model at 12:09 PM