When people ask, “Who are these people they survey all the time? I’ve never been asked to take part in a survey,” the answer is—me. I get surveyed, a time or two a month, with more frequent surveys around election times. Sometimes they’re political surveys, sometimes consumer surveys. (Although I tend to not qualify for consumer surveys, because I don’t shop enough.) Sometimes they’re combined. Anyway, last night I took part in a rather lengthy phone survey, mostly political. And I think it was either what is called a push poll (intended to change the mind of the person being surveyed), or it is being done by a certain industry to find the best ways to sway public opinion. 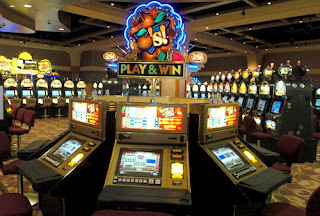 It was about VLTs (video lottery terminals), a form of gambling currently illegal in my state. During the current budget crisis (even in relatively healthy Texas, unemployment is around 9%, and as a result state revenue has fallen—hence the budget crisis) lawmakers are looking for a quick fix, without having to cut the services they use as inducements to vote them back into office. A lottery (which this state already has “for education”) is essentially a voluntary tax paid by stupid people, often stupid poor people who can’t afford to pay it while paying their rent and lunch for their children. VLTs would be an extension of the concept: get voluntary tax from stupid people so that we don’t have to raise taxes or cut the budget. They’re proposing I believe about 22,000 such machines, to be spread around horse and dog racing tracks and Indian reservations.
This comes up just about every legislative session (maybe because the budget is the one thing required of the legislature, and it’s always hard to accomplish). About six years ago these points were brought to my attention [along with my comments for today]:
Because of the survey last night, I can tell you that they will pressure you to support this additional gambling in the following ways:
You will also be told that, since the only ways of increasing revenue are by taxes or non-tax sources, and since VLTs are a non-tax source, wouldn’t you prefer allowing voluntary gambling rather than, say, an increased sales tax? I pointed out that this is a false choice; increased taxes typically result in lower revenues, and gambling causes greater expenditures in social costs. So for greater revenue, you want to encourage economic growth. That, of course wasn’t an option.
You will be told that the only reasons people have against the VLTs are that they could spread, and they increase traffic. Um, yawn. The survey didn’t seem to be aware of my points above, but had chosen pretty much the wimpiest arguments they could come up with to describe the opposition. I informed the surveyor of the points above, suggesting they were better arguments against.
Several times I was asked, in various ways, “If VLTs were made legal in the state, would you prefer to have them limited to 20,000 or 40,000?” Or, “If VLTs were made legal in the state, would you prefer to have them only at racetracks and Indian reservations where gambling already takes place, or expanded to airports or other public venues?” I would not, could not, in a car, not on a boat, not on a train. I do not want them here or there; I do not want them anywhere! (Thank you, Dr. Seuss, for always being so quotable.)
The process here would be to put a state constitutional amendment before the voters, and let them decide. But if this survey was an example of how to manipulate the public so that it doesn’t really know what it’s deciding, then it is better not to bring it before the public. (In , it’s SJR 33 for the constitutional amendment and SB 1118 for the enabling legislation. You can read Sen. Hinajosa’s rousing endorsement here: http://www.hinojosa.senate.state.tx.us/pr11/p030311a.htm. A call to your state senator and representative would be a good idea.)
I want to make a point about how this relates to Civilization on the Spherical Model. Is there anything civilizing about wanting something for nothing? Gambling is essentially being willing to pay hard earned money for the chance of getting more money that wasn’t earned. I realize not everyone agrees with me about the vice of gambling. If a person has the money, why not have the freedom to spend it as he chooses? That’s a good argument. Oddly enough, when a person chooses to spend that money in ways that are contrary to civilizing thought processes, those ways can lead to loss of freedom—addiction. Not for everyone, so there’s always a chance a person can get away without too many negative consequences. But just making the choice to want something for nothing (or to want escape from reality as with drugs, or to want sex without responsibilities or consequences) has a decaying effect on civilization as a whole. It isn’t possible to gain ground up toward civilization by taking steps downward toward savagery, even if they’re just little baby steps.
Posted by Spherical Model at 2:31 PM